). The most common infection is

Much less common, but more serious, causes of sore throat are

Abscess, epiglottitis, and tumors are of particular concern because they may block the airway.

Throat irritation and mild soreness can also be caused by dryness, irritants, gastroesophageal disease (GERD), and vocal strain (such as from yelling).

Tonsillopharyngitis Throat Infection Infections of the throat and/or tonsils are common, particularly among children. Throat infections are usually caused by a virus but may be caused by bacteria such as streptococcal bacteria... read more 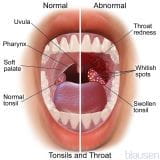 Tonsillopharyngitis is usually caused by a virus, typically one of the same viruses that causes the common cold. Most common colds begin with a mild sore throat. A less common viral cause is acute mononucleosis (caused by the Epstein-Barr virus), which occurs mainly in children and young adults. Rarer still, sore throat can be part of the initial infection with human immunodeficiency virus (HIV) or due to chronic fungal infections in HIV patients, such as thrush.

About 10% of sore throats in adults (and slightly more in children) are caused by a type of Streptococcus bacteria (streptococci). Such streptococcal infections are often termed strep throat. Strep throat is unusual in children younger than 2 years.

Rare bacterial causes include gonorrhea and diphtheria (in countries with low vaccination rates).

) may form beneath or near one of the tonsils (peritonsillar abscess). The usual cause is a streptococcal infection that has spread from the tonsils into deeper tissue. In young children, an abscess can form in the tissue at the back of the throat (retropharyngeal abscess).

). This infection causes severe pain and swelling. The swelling can close off the windpipe, particularly in infants and children. Epiglottitis used to occur mainly in children and usually was caused by Haemophilus influenzae type B (HiB) bacteria. Now that most children are vaccinated against HiB, epiglottitis is quite rare in children but HiB is still a cause in adults and unvaccinated children.

Not every sore throat requires immediate evaluation by a doctor. The following information can help people decide whether a doctor’s evaluation is needed and help them know what to expect during the evaluation.

In people with a sore throat, certain symptoms and characteristics are cause for concern. They include

People who have warning signs should go to the hospital right away.

People with a sore throat but no warning signs should call their doctor. People who have typical cold symptoms and mild to moderate discomfort may be advised to stay at home and treat their symptoms Treatment Sore throat is pain in the back of the throat. The pain can be severe and is usually worsened by swallowing. Many people with sore throat refuse to eat or drink. Sometimes pain is also felt... read more

with over-the-counter (OTC) remedies. People with severe pain and/or other symptoms (such as fever, extreme fatigue, or a productive cough) typically should be seen right away.

Doctors first ask questions about the person's symptoms and medical history and then do a physical examination. What doctors find during the history and physical examination helps them decide what, if any, tests need to be done (see table Some Causes and Features of Sore Throat Some Infectious Causes and Features of Sore Throat

During the medical history, doctors ask about the following:

During the physical examination, doctors focus on the nose and throat. However, if doctors suspect epiglottitis in children (because there are warning signs and no evidence of a cold), they do not examine the throat in their office because inserting a tongue depressor may cause a spasm that triggers complete airway blockage.

If epiglottitis is not suspected, doctors do the following:

The need for tests depends on what doctors find during the history and physical examination, particularly whether warning signs are present.

A doctor's first concern is to recognize which people might have epiglottitis. Stridor and drooling are warning signs, particularly in people who appear ill or with difficulty breathing. In such cases, people should not have x-rays. Instead, the doctor looks down the throat with a thin, flexible viewing tube inserted through the nose (flexible fiberoptic laryngoscopy). Because children are more likely to have sudden, complete blockage of their airway when their throat is examined, doctors minimize this danger by doing this examination only in the operating room, where advanced airway equipment and personnel are available. Adults who do not appear seriously ill and have no respiratory symptoms may have neck x-rays to look for a swollen epiglottis or have flexible fiberoptic laryngoscopy done in the emergency department or a specialist's office.

Despite what many people think, it is difficult for doctors to distinguish a strep throat from a sore throat caused by a virus based only on appearance. Both may cause a very red throat with white patches. Thus, unless people clearly have just a cold, doctors usually do tests to diagnose strep throat. There are two types of test, a rapid strep antigen test and a throat culture. Both tests are done on a sample taken from the back of the throat with a swab. The rapid strep antigen test can be done in the doctor's office in about 20 minutes. The rapid test is usually done only in children. If results are positive, children are treated for strep throat with antibiotics. If results are negative, another sample is sent to the laboratory for culture (growing microorganisms on a special gel so that there are enough to identify). If adults need testing for strep throat, doctors usually do only a throat culture because adults may have another bacterial infection that would not be identified by the rapid antigen test.

An abscess is often noticeable during the doctor's examination. The doctor can both diagnose and treat the abscess by inserting a small needle into the swollen area after spraying the throat with an anesthetic. If pus comes out, an abscess is confirmed, and the doctor removes as much pus as possible. If the location and extent of an abscess are unclear, doctors do a computed tomography (CT) scan of the neck.

Doctors do blood tests for mononucleosis or HIV only when they suspect people have one of these infections.

Doctors treat any specific or underlying conditions. For example, people with strep throat or other bacterial infections are given antibiotics.

It is important to relieve the pain of sore throat so that people can eat and drink. Ibuprofen or acetaminophen helps relieve pain and fever. People in severe pain may require the short-term use of opioids (such as oxycodone or hydrocodone). Warm saltwater gargles and throat lozenges or throat sprays (such as those containing benzocaine, lidocaine, or dyclonine) may temporarily help relieve pain. Providing soup is a good way to keep children well hydrated and nourished when swallowing is painful and before their appetite has returned.

Overview of Smell and Taste Disorders