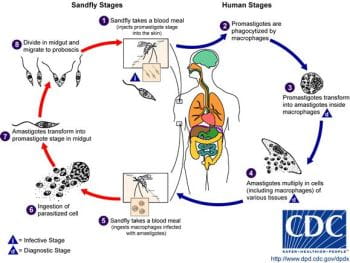 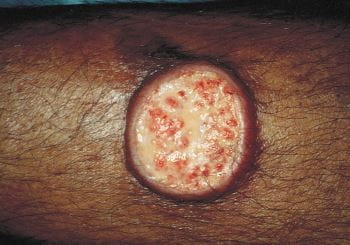 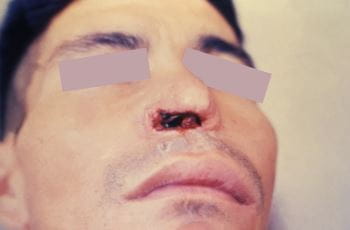 Mucosal Leishmaniasis
Leishmaniasis is caused by 20 or more species of Leishmania. Leishmaniasis includes several disorders that affect the skin, the mucous membranes of the nose, mouth, or throat or internal organs including the liver, spleen, and bone marrow.

Leishmaniasis occurs in scattered areas throughout the world.

Tiny infected sand flies spread Leishmania when they bite people or animals, such as dogs or rodents. Rarely, infection is spread in blood transfusions, through injection with a needle previously used by an infected person, from mother to child before or at birth, or, very rarely, through sexual contact or laboratory needle-stick accidents.

Leishmaniasis produces a spectrum of disease. There are three major forms. Each affects a different part of the body. After the protozoa enter the body through a bite in the skin, they may remain in the skin or spread to the mucous membranes of the nose, mouth, and throat, or to internal organs including the bone marrow, liver, and spleen.

In cutaneous leishmaniasis, the first symptom is usually a well-defined bump at the site of a sand fly bite. It typically appears after several weeks or months and contains parasites inside white blood cells known as macrophages. As the infection spreads, more bumps may appear near the initial bump. The initial bump slowly enlarges and often becomes an open sore, which may ooze or form a scab. The sores are usually painless and cause no other symptoms unless a secondary bacterial infection, characterised by redness in adjacent areas of the skin, pain, and sometimes fever, develops in them. The sores eventually heal on their own after several months but may persist for more than a year. They leave permanent scars similar to those due to burns. Rarely, sores appear on skin all over the body. When this happens, the person is evaluated for HIV infection Diagnosis Human immunodeficiency virus (HIV) infection is a viral infection that progressively destroys certain white blood cells and can cause acquired immunodeficiency syndrome (AIDS). HIV is transmitted... read more

and other causes of a weakened immune system.

In mucosal leishmaniasis, symptoms begin with a skin sore that heals on it own. Sores and tissue destruction may appear on mucous membranes inside the nose, mouth, or throat while the skin sore is present or months to years after it heals. The first sign may be a stuffy nose, a discharge from the nose, or nosebleeds. Over time, people may be severely disfigured.

Visceral leishmaniasis may start suddenly but usually develops gradually over weeks to months after the infecting sand fly bite. People may have irregular bouts of fever. They may lose weight, have diarrhea, and be generally tired. The liver, spleen, and sometimes lymph nodes enlarge. The number of blood cells decreases, causing anemia and making people more susceptible to other infections. Without treatment, visceral leishmaniasis can result in death.

People who respond to treatment and those who are infected but do not have symptoms are unlikely to have symptoms later unless their immune system is weakened (for example, by AIDS or by drugs that are used to suppress the immune system, such as those used to prevent rejection of a transplanted organ).

Blood tests to detect antibodies against Leishmania can sometimes help doctors diagnose visceral leishmaniasis. (Antibodies Antibodies One of the body's lines of defense (immune system) involves white blood cells (leukocytes) that travel through the bloodstream and into tissues, searching for and attacking microorganisms and... read more

are proteins produced by the immune system to help defend the body against attack, including that by parasites.) However, results of antibody tests may be negative, particularly in people with a weakened immune system, such as those with AIDS. Blood tests for antibodies are not helpful in diagnosing cutaneous leishmaniasis.

For people who travel to or live in areas where the infection is common, the following can help:

Consultation with an expert on the treatment of leishmaniasis is recommended. Doctors consider the following factors when selecting a drug to treat leishmaniasis:

Drugs used to treat leishmaniasis include:

Miltefosine has the advantage of being taken by mouth, but it is not given to pregnant women because it may cause birth defects. Women of childbearing age who take miltefosine must use effective birth control measures.

Sodium stibogluconate and meglumine antimonate can adversely affect the heart and other organs. The severity of side effects increases with the person's age. Resistance has been reported in many areas of the world. In the United States, sodium stibogluconate is available only from the Centers for Disease Control and Prevention.

Fluconazole and related antifungal drugs taken by mouth may be effective in some cases of cutaneous leishmaniasis. They are not used for mucosal or visceral leishmaniasis.

For small, uncomplicated sores due to Leishmania species that do not cause mucosal leishmaniasis, treatment options include:

Cryotherapy can be painful and is limited to small lesions. Heat therapy requires a special treatment device and is not widely available. Paromomycin ointment and sodium stibogluconate injected into the sore are not available in the United States. If a sore has started to heal on its own, doctors may observe it rather than treat it, provided the sore is caused by a Leishmania species that is not associated with mucosal leishmaniasis. If it continues to heal, no treatment is needed.

Treatment with an antileishmanial drug is used

Of the antileishmanial drugs, liposomal amphotericin B or miltefosine are the most likely to be effective for cutaneous leishmanias.

When a leishmania skin sore becomes secondarily infected with bacteria, an antibiotic effective for the treatment of skin and soft tissue infections is used.

The drugs of choice are

Either miltefosine by mouth or liposomal amphotericin B by vein (intravenously) are used. Sodium stibogluconate or meglumine antimonate are alternatives for people infected in areas where resistance has not been reported.

Reconstructive surgery may be needed if the nose or face is disfigured, but surgery should be delayed for 12 months after treatment to avoid losing a skin graft should a relapse occur.

The drugs of choice are

Sodium stibogluconate or meglumine antimoniate, both antimony-containing drugs, were once the treatment of choice for visceral leishmaniasis, but resistance to them is now widespread in India and some other countries, and side effects are a concern. They remain alternatives in areas of Latin America and Africa where resistance has not become a problem.

Supportive measures, such as adequate nutrition, blood transfusions, or antibiotics to treat concurrent bacterial infections, may be needed along with antileishmanial therapy.

For people with AIDS

. Miltefosine is an alternative, but it is less likely to be effective. In addition, treatment of AIDS with antiretroviral drugs Drug Treatment of Human Immunodeficiency Virus (HIV) Infection Antiretroviral drugs used to treat human immunodeficiency virus (HIV) infection aim to do the following: Reduce the amount of HIV RNA (viral load) in the blood to an undetectable amount Restore... read more can improve a person's immune responses Immune Response Natural barriers and the immune system defend the body against organisms that can cause infection. (See also Lines of Defense.) Natural barriers include the skin, mucous membranes, tears, earwax... read more against Leishmania and reduce the risk of recurrence.

In some people with AIDS and recurrent visceral leishmaniasis, liposomal amphotericin B is given at regular intervals after initial treatment to prevent additional recurrences.