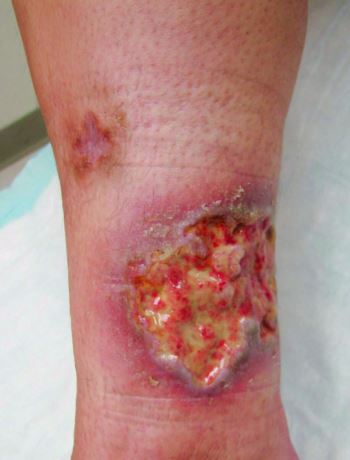 Pyoderma Gangrenosum
Pyoderma gangrenosum is a chronic inflammatory skin disorder of unknown cause that causes large sores on the skin.

In pyoderma gangrenosum, the immune system seems to be reacting to the skin itself. Unlike many inflammatory skin conditions that are caused by lymphocytes Lymphocytes One of the body's lines of defense (immune system) involves white blood cells (leukocytes) that travel through the bloodstream and into tissues, searching for and attacking microorganisms and... read more

(proteins), or both, pyoderma gangrenosum involves abnormal function of another type of white blood cell called neutrophils Neutrophils One of the body's lines of defense (immune system) involves white blood cells (leukocytes) that travel through the bloodstream and into tissues, searching for and attacking microorganisms and... read more (see Overview of the Immune System Overview of the Immune System The immune system is designed to defend the body against foreign or dangerous invaders. Such invaders include Microorganisms (commonly called germs, such as bacteria, viruses, and fungi) Parasites... read more ).

Most often, pyoderma gangrenosum begins as a red bump that may resemble a pimple or an insect bite. Less often, it begins as a blister. The bump or blister then becomes an open, painful sore (ulcer) that expands rapidly. The sores have a raised border that is dusky or purple. The sores can grow together to form larger sores. People often are left with scars after ulcers heal. People commonly have fever and a general feeling of illness (malaise).

Pyoderma gangrenosum can also develop at other locations, such as in the abdominal wall around a colostomy or ileostomy opening in people who have inflammatory bowel disease, or on the genitals. In some people with pyoderma gangrenosum, areas other than the skin, such as the bones, lungs, heart, liver, or muscles, are affected.

A sample of skin may need to be removed and examined under a microscope (called a skin biopsy Biopsy Doctors can identify many skin disorders simply by looking at the skin. A full skin examination includes examination of the scalp, nails, and mucous membranes. Sometimes the doctor uses a hand-held... read more

), even though this procedure might worsen the problem temporarily.

Dressings that protect the skin from drying are applied to help heal the sores.

Potent corticosteroid creams or tacrolimus can be directly applied to sores that are new and not deep. Prednisone taken by mouth is given to people severely affected by the disease.

Surgical treatments are typically not done because they may worsen the sores.