Some Causes and Features of Itching

Itching can be very uncomfortable. It is one of the most common reasons people see doctors who specialize in skin disorders (dermatologists).

Itching makes people want to scratch. Scratching temporarily relieves itching but can damage the skin, sometimes resulting in more itching (the itch–scratch cycle) or infection (called a secondary infection). Over time, the skin can become thick and scaly (called lichenification).

Itching can result from

In many skin and systemic allergic disorders, itching is caused by histamine. Histamine is a chemical in the body that is stored in mast cells. Mast cells are part of the immune system, and histamine is involved in allergic reactions. When mast cells are stimulated by various allergens (substances that cause an allergic reaction), they release histamine. When histamine is released into the blood, it can cause many symptoms, including itching and inflammation. There are a number of other chemicals in the body that play an important role in itching, such as proteases and cytokines Cytokines One of the body's lines of defense (immune system) involves white blood cells (leukocytes) that travel through the bloodstream and into tissues, searching for and attacking microorganisms and... read more .

The most common causes of itching are skin disorders:

Some of the more common systemic causes are

Disorders of the nervous system

Irritation of sensory nerves, for example, when a nerve is compressed, can cause itching localized to the part of the body supplied by that nerve. In contrast, some disorders that affect the nervous system may cause widespread (generalized) itching because itch neurons (one type of nerve cell) are too active or are less inhibited by other neurons. For example, in multiple sclerosis Multiple Sclerosis (MS) In multiple sclerosis, patches of myelin (the substance that covers most nerve fibers) and underlying nerve fibers in the brain, optic nerves, and spinal cord are damaged or destroyed. The cause... read more , nerve conduction is impaired because of an autoimmune process where the immune system attacks the fatty tissue that coats nerve fibers (myelin). This process makes the itch neurons less inhibited and thus more active. Itch that results from nervous system disorders is called neuropathic itch.

Some people who have psychologic disorders may have itching for which no physical cause can be found. This type of itching is called psychogenic itching.

Drugs and chemicals can cause itching when taken internally or when applied to the skin. Usually the itching is caused by an allergic reaction. A few drugs, such as morphine and some radiopaque contrast agents Procedure for CT

used when taking certain x-rays, can also cause itching without causing an allergic reaction.

Not every episode of itching requires immediate evaluation by a doctor. The following information can help people decide whether a doctor's evaluation is needed and help them know what to expect during the evaluation. Most conditions that cause itching are not serious.

The following may indicate that the cause could be serious:

People who have weight loss, fatigue, or night sweats should see a doctor as soon as possible. People with any of the other warning signs or with severe itching should probably see a doctor immediately.

Doctors ask many questions and look at the skin. Often, a person needs to undress so that the entire skin surface can be checked. If no clear cause is found after checking the skin, doctors may do a complete physical examination to check for systemic causes. Testing may be necessary to diagnose certain systemic causes and sometimes skin disorders.

If itching is widespread and begins shortly after use of a drug, that drug may be the cause. If itching (usually with a rash) is confined to an area that was in contact with a substance, particularly if the substance is known to cause contact dermatitis Contact Dermatitis Contact dermatitis is skin inflammation caused by direct contact with a particular substance. The rash may be itchy, is confined to a specific area, and often has clearly defined boundaries... read more 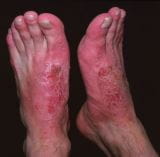 , that substance is a likely cause. However, allergic causes of widespread itching can be difficult to identify because affected people have usually eaten several different foods and have been exposed to many substances that could cause an allergic reaction before itching develops. Similarly, identifying a drug that is causing the reaction in a person taking several drugs may be difficult. Sometimes the person has been taking the drug causing the reaction for months or even years before a reaction occurs.

Most causes of itching can be diagnosed without testing. If the diagnosis of a skin abnormality is not clear from its appearance and the person's history, removal (biopsy Biopsy Doctors can identify many skin disorders simply by looking at the skin. A full skin examination includes examination of the scalp, nails, and mucous membranes. Sometimes the doctor uses a hand-held... read more

) of a skin sample may be necessary so that it can be analyzed.

If the cause seems not to be an allergic reaction or skin disorder, testing is done based on the person's other symptoms. For example, tests may be done for gallbladder or liver disorders, chronic kidney disease, thyroid disorders, diabetes, or cancer.

The most important aspect of treating itch is to address the cause. In addition, other measures can help relieve itching.

If itching is caused by dry skin, modifications to basic skin care are often very effective. Dryness is often caused by excessive bathing and washing. Skin care adjustments should include bathing or washing less frequently, using lukewarm instead of hot water, and using less soap. Excessive rubbing of dry skin should be avoided, and a moisturizing cream should be applied after bathing or washing. In addition, humidifying dry air (for example, in winter) and not wearing wool clothing can also help.

Topical treatments are substances that are applied to the skin, such as creams and lotions. Most topical treatments are given to address the underlying cause of the itch, for example, a doctor may give a corticosteroid cream to people who have inflamed skin resulting from atopic dermatitis Atopic Dermatitis (Eczema) Atopic dermatitis (commonly referred to as eczema) is chronic, itchy inflammation of the upper layers of the skin that often develops in people who have hay fever or asthma and in people who... read more

Corticosteroid creams, lotions, and ointments should be used only when the skin is inflamed, such as when a person has a rash. They should usually not be used when

Itch-relieving topical treatments that do not address a specific cause can also be given and include lotions or creams that contain menthol, camphor, pramoxine, or capsaicin. Creams and lotions that contain the antihistamine diphenhydramine or the anesthetic benzocaine are not recommended.

Exposure to ultraviolet light at a doctor's office or in the home (phototherapy Phototherapy Psoriasis is a chronic, recurring disease that causes one or more raised, red patches that have silvery scales and a distinct border between the patch and normal skin. A problem with the immune... read more

) can often help lessen itchy skin disorders. It also often helps relieve itching without a rash (caused by various disorders) when other treatments are unsuccessful.

Systemic treatments are drugs that are taken internally by mouth or by injection. They are used if itching is widespread or if topical treatments are ineffective.

, particularly hydroxyzine, are used most often. Some antihistamines, such as cyproheptadine, diphenhydramine, and hydroxyzine, cause drowsiness. They help relieve itching and, when used before bedtime, aid in sleep. Helping people sleep is important because severe itch can affect sleep and thus greatly decrease well being. Because they can cause drowsiness, these drugs are usually not given during the day. In addition, they should also be used selectively and carefully by older people because older people are at higher risk of falling. Cetirizine and loratadine cause less drowsiness but rarely can have this effect in older people. Fexofenadine causes less drowsiness but sometimes causes a headache. Doxepin makes people very drowsy and is effective, so it can be taken at bedtime if itching is severe.

Cholestyramine is used to treat itching caused by certain gallbladder or liver disorders. However, cholestyramine has an unpleasant taste, causes constipation, and can decrease absorption of other drugs.

Gabapentin, an antiseizure drug Antiseizure drugs In seizure disorders, the brain's electrical activity is periodically disturbed, resulting in some degree of temporary brain dysfunction. Many people have unusual sensations just before... read more , can help relieve neuropathic itch and itching caused by chronic kidney disease but can cause drowsiness.