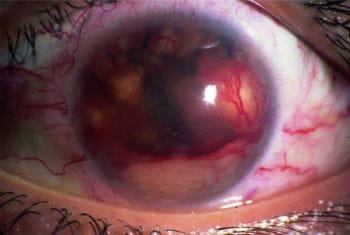 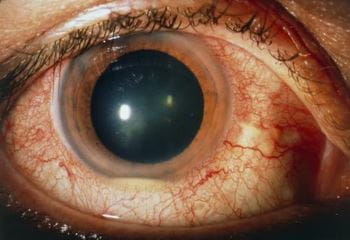 A number of connective tissue diseases cause inflammation of the uveal tract. (See also Overview of Uveitis Overview of Uveitis Uveitis is defined as inflammation of the uveal tract—the iris, ciliary body, and choroid. However, the retina and fluid within the anterior chamber and vitreous are often involved as well.... read more

, inflammatory bowel disease Overview of Inflammatory Bowel Disease Inflammatory bowel disease (IBD), which includes Crohn disease and ulcerative colitis, is a relapsing and remitting condition characterized by chronic inflammation at various sites in the gastrointestinal... read more (ulcerative colitis and Crohn disease), and psoriatic arthritis Psoriatic Arthritis Psoriatic arthritis is a spondyloarthropathy and chronic inflammatory arthritis that occurs in people with psoriasis of the skin or nails. The arthritis is often asymmetric, and some forms involve... read more

. Uveitis is classically unilateral, but recurrences are common and active inflammation may alternate between eyes. Men are affected more commonly than women. Most patients, regardless of sex, are HLA-B27 positive.

characteristically causes chronic bilateral iridocyclitis in children, particularly those with the pauciarticular variety. Unlike most forms of anterior uveitis, however, JIA-associated uveitis tends not to cause pain, photophobia, and conjunctival injection but only blurring and miosis and is, therefore, often referred to as white iritis. It can be asymptomatic. JIA-associated uveitis is more common among girls. Because symptoms can be overlooked or absent, patients with JIA should be regularly screened.

Rheumatoid arthritis, in contrast, is not associated with isolated uveitis but can cause scleritis, which may cause secondary uveal tract inflammation.

Recurrent bouts of inflammation are best treated with a topical corticosteroid and a cycloplegic-mydriatic drug. Given the chronic nature of disease and risk of treatment-related cataract and glaucoma development, long-term control often requires use of a noncorticosteroid immunosuppressive drug (eg, methotrexate, mycophenolate mofetil).

accounts for 10 to 20% of cases of uveitis, and about 25% of patients with sarcoidosis develop uveitis. Sarcoid uveitis is more common among blacks and older patients.

Virtually any symptoms and signs of anterior, intermediate, posterior, or panuveitis can occur. Suggestive findings include conjunctival granulomas, large keratic precipitates on the corneal endothelium (so-called granulomatous or mutton fat precipitates), iris granulomas, and retinal vasculitis. Biopsy of suggestive lesions, which provides the most secure diagnosis, is usually done on the conjunctiva; it is rarely done on intraocular tissues because of the risk associated with the procedure.

is rare in North America but is a fairly common cause of uveitis in the Middle East and Far East.

Diagnosis requires the presence of associated systemic manifestations, such as oral aphthous or genital ulcers; dermatitis, including erythema nodosum; thrombophlebitis; or epididymitis. Oral aphthae may be biopsied to show an occlusive vasculitis. There are no laboratory tests for Behçet disease, but it is associated with HLA-B51.

Treatment with local and systemic corticosteroids and a cycloplegic-mydriatic drug may alleviate acute exacerbations, but most patients eventually require systemic corticosteroids and a noncorticosteroid immunosuppressive drug to control the inflammation and avoid the serious complications of long-term corticosteroid treatment. Biologic agents such as interferons and tumor necrosis factor inhibitors have been effective in selected patients unresponsive to other therapies. Alkylating agents (eg, cyclosporine and chlorambucil) have induced remission in patients.

Vogt-Koyanagi-Harada disease is an uncommon systemic disorder characterized by uveitis accompanied by cutaneous and neurologic abnormalities. VKH disease is particularly common among people of Asian, Asian Indian, and American Indian descent. Women in their 20s and 30s are affected more often than men. The etiology is unknown, although an autoimmune reaction directed against melanin-containing cells in the uveal tract, skin, inner ear, and meninges is strongly suspected.

Neurologic symptoms tend to occur early and include tinnitus, dysacusis (auditory agnosia), vertigo, headache, and meningismus. Cutaneous findings frequently occur later and include patchy vitiligo (especially common on the eyelids, low back, and buttocks), poliosis (a localized patch of white hair, which may involve the eyelashes), and alopecia, often involving the head and neck. Common findings include serous retinal detachment Retinal Detachment Retinal detachment is separation of the neurosensory retina from the underlying retinal pigment epithelium. The most common cause is a retinal break (a tear or, less commonly, a hole) (rhegmatogenous... read more

Fever in Infants and Children
Test your knowledge