There’s a Tick on Me! Now What? —Commentary

There are few things more unsettling than spotting a tick stealthily crawling up your leg or biting into your skin. It’s even scarier if it’s already latched on and making a meal out of you. The good news: Most tick bites don’t transmit dangerous diseases. The bad news: Some ticks, such as the deer ticks that spread Lyme disease, are so small and difficult to spot that you might not even know you were bitten. The common dog tick is much larger, and does not transmit Lyme disease.

But that doesn’t mean you shouldn’t take a tick bite seriously. Depending on where you live, these arachnids can spread a number of diseases from Rocky Mountain spotted fever and southern tick-associated rash illness (STARI) to the most notable and serious condition spread by ticks—Lyme disease. Here are answers to five of the most common questions you may have after you find a tick on yourself or a loved one.

1. How should I remove the tick?

Ticks should be removed as soon as possible. To remove the tick, grasp it with tweezers as close to the head as possible and pull straight out to remove the entire creature, especially the head. Once the tick has been removed, apply a small amount of antiseptic to the area and watch for additional swelling, discoloration or rash, particularly a round, reddened area around the site of the bite. 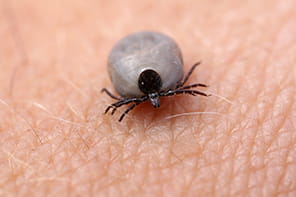 If you’re queasy or uncertain you’ll be able to remove the entire tick, you can visit a hospital or doctor’s office to have the tick detached. But don’t delay—it’s important to remove the tick as soon as possible.

If you remove the tick yourself, you can keep it in a plastic bag in the freezer should you decide to visit a doctor. Most bites do not transmit diseases, but if you visit a doctor within 72 hours, he or she will look at the tick to determine what you may have been exposed to. Depending on your geographic location and other factors, your doctor may prescribe a single dose of a common antibiotic.

If the site of the bite does not heal or you develop a rash or other symptoms, see a doctor immediately.

3. Will I get Lyme disease?

It depends. Even in Lyme-heavy areas, not all ticks carry the causative bacteria. And typically, people contract Lyme disease only if an infected tick remains attached to them for at least a day and a half—that’s why it’s so important to remove the tick as quickly as possible.

It’s important to note, however, that Lyme disease is not common in parts of the country where deer ticks are not typically found. In fact, the Centers for Disease Control and Prevention (CDC) reported that in 2014, almost all confirmed Lyme disease cases occurred in just 14 states: Connecticut, Delaware, Maine, Maryland, Massachusetts, Minnesota, New Hampshire, New Jersey, New York, Pennsylvania, Rhode Island, Vermont, Virginia and Wisconsin. 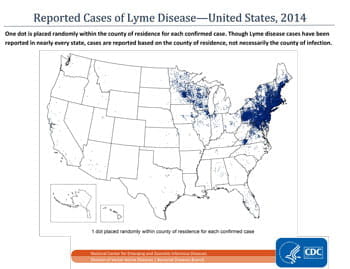 Usually a large, raised red spot will develop at the site of the bite and will grow larger with time, forming a bull’s eye and lasting for three to four weeks. However, not everyone infected with Lyme disease contracts the rash. About 25% of people never develop—or notice—the bull’s eye rash. See your doctor if you develop other symptoms within a month of a tick bite.

5. How can I keep it from happening again?

Your first line of defense against tick bites is to avoid areas where ticks are common—heavily wooded or grassy humid environments. If you’re in these areas, stay on clear-cut trails and avoid walking through tall grasses. Also, be sure to wear long, light-colored clothing, with pants tucked into socks. Keep long hair tied or wear a hat, and use an insect repellent that contains DEET.

After you leave an area with ticks, make sure you do a thorough tick check when you get home (and help young ones check too). Pay particular attention to warm, dark moist parts of the body – behind the ears, hair, underarms, behind the knees and groin. 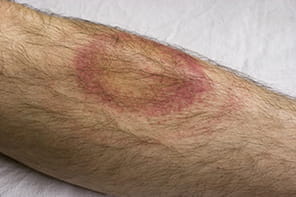 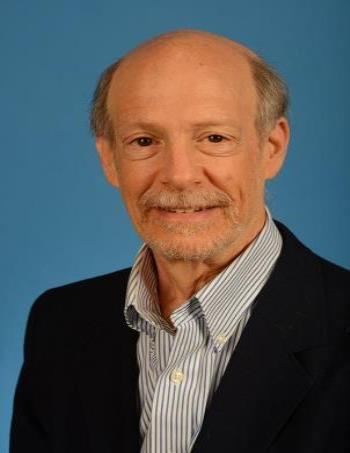