Is the New Automated Insulin Pump Really an Artificial Pancreas?—Commentary

What is this device?

The Medtronic 670G combines an insulin pump, which delivers insulin to the user, with a continuous glucose (blood sugar) monitor, and a microprocessor. The glucose monitor measures the user's glucose level every 5 minutes and wirelessly communicates the data to the processor, which then calculates real-time changes to background (basal) insulin dosing and directs the pump to adjust the dose. The 670G is the first monitor/pump combination that is approved to do this.

Is it really an “artificial pancreas?”

Not quite, but it’s getting close. A completely artificial pancreas would be able to detect and respond to ALL changes in a person’s blood glucose level, including the sharp increases that come after a meal. However, the 670G automates only basal insulin dosing. To account for the increase in glucose after meals, users still have to keep track of the carbohydrates they eat and do a fingerstick to measure their blood glucose level and then manually instruct the pump to give additional insulin (bolus dose). Results from the built-in glucose monitor cannot be used to determine the bolus dose. Thus, users will still need to do fingersticks 4 times daily.

However, this is still an improvement over currently available insulin pumps, which have only the ability to give a set basal dose and suspend insulin delivery to prevent low blood glucose levels (hypoglycemia).

Yes, in particular, people in whom the 670G was tested did not have any episodes of hypoglycemia, which is the big potential concern when using an automated system to adjust insulin dosing. Users also did not develop diabetic ketoacidosis.

However, the 670G has been studied only in individuals 14 and older, although a study is underway in children aged 7 to 13.  It is not recommended in children under the age of 7, or in anyone requiring less than 8 units of insulin daily.  It is also not approved for use in pregnancy.

It is clear that excitement for this new technology must be tempered with realistic expectations and understanding of its limitations. The primary benefits of the new pump are that it may improve blood glucose control, while decreasing episodes of hypoglycemia, particularly at night, when people are often most susceptible to hypoglycemia. This is important because the risk of hypoglycemia increases when a person tightly controls blood glucose levels, but tight blood glucose control is key to reducing the risks of complications of diabetes, including eye problems and kidney problems. It may possibly decrease the burden of fingerstick monitoring in some users who require monitoring more than 4 times daily to maintain control. The Medtronic 670G is an important milestone in the management of type 1 diabetes that does bring us closer to the ultimate goal of having a commercially available artificial pancreas. 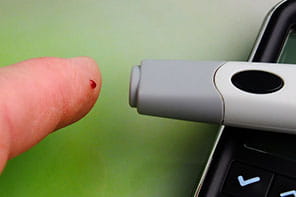