Drug Use During Pregnancy 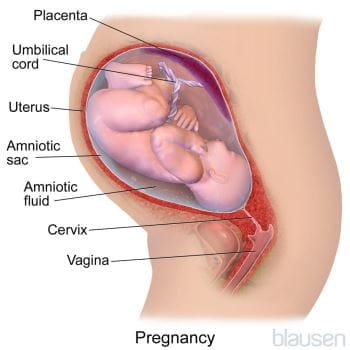 More than half of pregnant women take medicines, drink alcohol, smoke, or use illegal drugs at some time during pregnancy.

How do drugs affect pregnancy?

Many drugs taken by pregnant women are carried to the baby in the womb by crossing the placenta. The placenta is an organ on the inside of the uterus (womb) that carries blood with oxygen and nutrition to the baby. Drugs can:

How do I know if a drug is safe to take during pregnancy?

Many medicines and vaccines (shots) aren't safe for pregnant women. They can cause birth defects, growth problems, or even death of a baby before or after birth.

Talk to your doctor about the medicines and drugs you take:

If a medicine you take is risky, doctors can often replace it with a safer medicine. And sometimes even a dangerous medicine is worth taking to treat an even more dangerous illness. For example, you may need to take a medicine called a blood thinner to prevent fatal blood clots. Your doctor will choose the right medicine to keep you and your baby healthy. Always talk with your doctor before stopping, starting, or changing your medicines.

During pregnancy and the first few months of life, your baby is protected against many infections from you (your immune system Overview of the Immune System The immune system is your body's defense system. It helps protect you from illness and infection. The immune system's job is to attack things that don’t belong in your body, including: Germs... read more ). This protection comes to your baby through your bloodstream during pregnancy. If you haven't had all your vaccinations, some are safe to get during pregnancy. However, some vaccines shouldn't be given and some are given only when you have a high risk of infection.

Your doctor will recommend vaccines that are safe to give during your pregnancy:

Vaccines that aren't safe during pregnancy include:

What problems do social drugs cause during pregnancy?

Social drugs that can cause problems include:

Alcohol is a leading cause of birth defects. It can cause:

You shouldn't drink alcohol while pregnant.

Doctors are unclear if caffeine during pregnancy harms a baby. Caffeine is in coffee, some teas, some sodas, energy drinks, chocolate, and some drugs.

Doctors think that caffeine is safe in small amounts, such as one cup of coffee per day.

However, drinking more than 7 cups of coffee per day may cause:

If you smoke cigarettes when pregnant or even breathe in smoke from people who are smoking, it can hurt your baby. It may cause:

You shouldn't smoke at all while pregnant and should avoid being around smoke as much as you can.

Doctors are unclear if marijuana during pregnancy harms a baby but suggest that you avoid it. Marijuana may cause behavior problems in your baby if you use it heavily while pregnant.

Aspartame is an artificial sweetener in some food and drinks and small amounts may be safe during pregnancy. For example, pregnant women should drink less than 1 liter (about 3 cans) of diet soda per day.

However, pregnant women with a disease called phenylketonuria Overview of Amino Acid Metabolism Disorders Amino acid metabolism disorders are hereditary metabolic disorders. Hereditary disorders occur when parents pass the defective genes that cause these disorders on to their children. In most... read more shouldn't eat or drink aspartame.

What problems do illegal drugs cause during pregnancy?

Using illegal drugs during pregnancy can cause serious problems for a pregnant woman and her baby. All illegal drugs and some legal drugs (particularly opioids such as oxycodone), when used too much, increase the chances of a baby being too small or being born too early.

Illegal drugs that can cause problems include:

Amphetamines during pregnancy may cause:

Bath salts is the name given to a group of drugs made from different chemicals that give the same high as amphetamines. Using bath salts during pregnancy may cause:

Using cocaine during pregnancy can narrow blood vessels in the placenta, which can cause:

Women who use cocaine during pregnancy often do other things that can harm their babies, such as smoking, using other drugs, or getting poor medical care. Because of this, doctors aren't sure which problems are caused by the cocaine alone. Still, you shouldn't use cocaine at all while pregnant.

Hallucinogens include Ecstasy (MDMA), methamphetamine, and LSD. Using hallucinogens during pregnancy may cause:

Opioids include medicines (such as oxycodone, methadone, and morphine) that doctors prescribe to relieve pain. Heroin is an illegal opioid that people become addicted to and isn't prescribed by doctors. Using any opioids for a long time during pregnancy may cause:

If you have a severe, painful injury (such as a broken bone or a bad burn), it's probably safe for your doctor to prescribe an opioid for several days. Otherwise, you should avoid using opioids.

Drug Use During Pregnancy