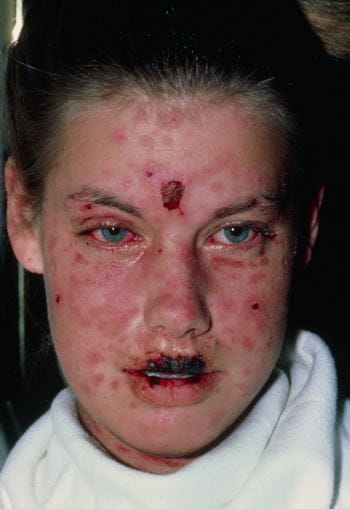 Stevens-Johnson Syndrome (SJS)
Stevens-Johnson syndrome and toxic epidermal necrolysis are two forms of the same life-threatening skin disease that cause rash, skin peeling, and sores on the mucous membranes.

(See also Introduction to Hypersensitivity Reactions and Inflammatory Skin Disorders Introduction to Hypersensitivity and Inflammatory Skin Disorders The immune system plays a vital role in maintaining the health of all the tissues of the body. The immune system reacts to invaders, such as microorganisms, foreign substances, or cancer cells... read more .)

Skin peeling is the hallmark of these conditions. The skin peeling involves the entire top layer of the skin (the epidermis), which sometimes peels off in sheets from large areas of the body (see Structure and Function of the Skin Structure and Function of the Skin The skin is the body’s largest organ. It serves many important functions, including Protecting the body against trauma Regulating body temperature Maintaining water and electrolyte balance Sensing... read more

In both forms, blistering of the mucous membranes typically occurs in the mouth, eyes, and vagina.

Both disorders can be life threatening.

About half the cases of Stevens-Johnson syndrome and nearly all the cases of toxic epidermal necrolysis are caused by a reaction to a drug, most often sulfa and other antibiotics; antiseizure drugs, such as phenytoin and carbamazepine; and certain other drugs, such as piroxicam or allopurinol. Some cases are caused by a bacterial infection, vaccination, or graft-versus-host disease Graft-versus-host disease Transfusions are given to increase the blood's ability to carry oxygen, restore the amount of blood in the body (blood volume), and correct clotting problems. Transfusions are usually safe,... read more . Sometimes, a cause cannot be identified. In children with Stevens-Johnson syndrome, an infection is the most likely cause.

(particularly when people also have pneumonia caused by Pneumocystis jirovecii). The tendency to develop one of these disorders can run in families.

Symptoms of SJS and TEN

Stevens-Johnson syndrome and toxic epidermal necrolysis usually begin 1 to 3 weeks after the start of a drug (if caused by a drug) with fever, headache, cough, keratoconjunctivitis (inflammation of the conjunctiva and the cornea in the eyes), and body aches. Then the skin changes begin, with a flat red rash on the face, neck, and trunk, often spreading later to the rest of the body in an irregular pattern. The areas of rash enlarge and spread, often forming blisters in their center. The skin of the blisters is very loose and easy to rub off, often with just a gentle touch or pull, and the blisters peel off over a period of 1 to 3 days.

In both disorders, sores appear on the mucous membranes lining the mouth, throat, anus, genitals, and eyes. The damage to the lining of the mouth makes eating difficult, and closing the mouth may be painful, so the person may drool. The eyes may become very painful and swell and become so crusted that they seal shut. The corneas can become scarred. The opening through which urine passes (urethra) may also be affected, making urination difficult and painful. Sometimes the mucous membranes of the digestive and respiratory tracts are involved, resulting in diarrhea and cough, pneumonia, and difficulty breathing.

The skin loss in toxic epidermal necrolysis is similar to a severe burn and is equally life threatening. People are very ill and may be unable to eat or open their eyes. Huge amounts of fluids and salts can seep from the large, raw, damaged areas. People who have this disorder are very susceptible to organ failure. They are also at risk of infection at the sites of damaged, exposed tissues. Such infections are the most common cause of death in people with this disorder.

Diagnosis of SJS and TEN

Doctors can usually diagnose Stevens-Johnson syndrome and toxic epidermal necrolysis by the appearance of the affected skin and mucous membranes, by their symptoms (pain rather than itching), by how quickly the skin is affected, and by how much of the skin is affected.

A sample of skin may be removed and examined under a microscope (called a skin biopsy Biopsy Doctors can identify many skin disorders simply by looking at the skin. A full skin examination includes examination of the scalp, nails, and mucous membranes. Sometimes the doctor uses a hand-held... read more

Prognosis of SJS and TEN

In toxic epidermal necrolysis, the death rate can be as high as 25% in adults and can be even higher in older adults with very severe blistering. The death rate in children is estimated to be under 10%.

In Stevens-Johnson syndrome, the death rate is about 5%.

Treatment of SJS and TEN

People with Stevens-Johnson syndrome or toxic epidermal necrolysis are hospitalized. Any drugs suspected of causing either disorder are immediately discontinued. When possible, people are treated in a burn center or intensive care unit and given scrupulous care to avoid infection (see Severe burns Severe burns Burns are injuries to tissue that result from heat, electricity, radiation, or chemicals. Burns cause varying degrees of pain, blisters, swelling, and skin loss. Small, shallow burns may need... read more

). If the person survives, the skin grows back on its own, and, unlike burns, skin grafts are not needed. Fluids and salts, which are lost through the damaged skin, are replaced by vein (intravenously).

Use of drugs to treat these disorders is controversial because, although there are theoretical reasons why certain drugs might be helpful, none have clearly been shown to improve survival. Cyclosporine may lessen the duration of active blistering and peeling and possibly increase the survival rate. Some doctors believe that giving large doses of corticosteroids within the first few days is beneficial, whereas others believe they should not be used because they might increase the risk of serious infection. If infection develops, doctors give antibiotics immediately.

Doctors may do a plasmapheresis Apheresis In apheresis, blood is removed from a person and then returned after substances are removed from it. Apheresis can be used to Obtain healthy blood components from a donor to transfuse to a person... read more . During this procedure, the person's blood is removed, and the plasma is separated from the blood. This procedure removes certain substances from the blood, possibly including drugs and antibodies (immune system proteins) that could be causing the disorder.

Drugs called immunosuppressants may be given. Immunosuppressants weaken (suppress) the immune system and help keep it from attacking the body's own tissues. Tumor necrosis factor (TNF)–inhibiting drugs are a type of immunosuppressant. TNF inhibitors, such as infliximab and etanercept, are given to people with Stevens-Johnson syndrome or toxic epidermal necrolysis to help suppress inflammation.

Overview of the Kidneys and Urinary Tract