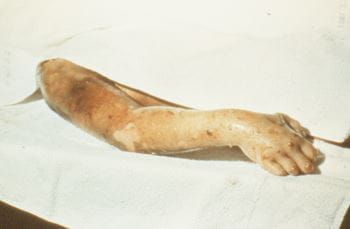 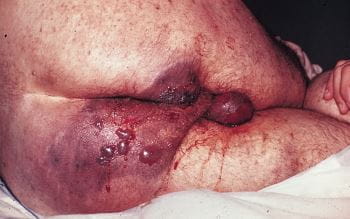 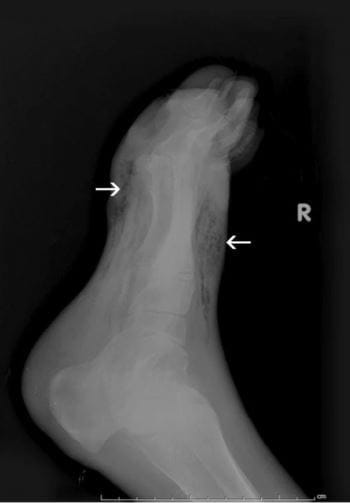 Gangrene of the Foot (X-Ray)
Clostridial soft-tissue infections include cellulitis, myositis, and clostridial myonecrosis. They usually occur after trauma. Symptoms may include edema, pain, gas with crepitation, foul-smelling exudates, intense coloration of the site, and progression to shock, renal failure, and sometimes death. Diagnosis is by inspection, smell, and Gram stain and is confirmed by culture. Treatment is with penicillin and surgical debridement. Hyperbaric oxygen is sometimes beneficial.

(See also Overview of Anaerobic Bacteria Overview of Anaerobic Bacteria Bacteria can be classified by their need and tolerance for oxygen: Facultative: Grow aerobically or anaerobically in the presence or absence of oxygen Microaerophilic: Require a low oxygen concentration... read more and Overview of Clostridial Infections Overview of Clostridial Infections Clostridia are spore-forming, gram-positive, anaerobic bacilli present widely in dust, soil, and vegetation and as normal flora in mammalian gastrointestinal tracts. Pathogenic species produce... read more .)

Clostridial infections of soft tissues may occur after an injury or spontaneously. Infection typically results in gas in soft tissues.

Clostridium perfringens is the most common species involved.

Rarely, spontaneous cases occur, usually caused by C. septicum bacteremia originating from occult colon perforation in patients with colon cancer, diverticulitis, or bowel ischemia. Because C. septicum is aerotolerant, infection can spread widely to normal skin and soft tissues. Concurrent neutropenia, regardless of cause, predisposes to C. septicum bacteremia, which results in a poor prognosis; the prognosis is worse if intravascular hemolysis occurs.

In suitable conditions (low oxidation-reduction potential, low pH), as occur in devitalized tissue, infection progresses rapidly, from initial injury through shock, toxic delirium, and death within as little as 1 day.

Clostridial cellulitis occurs as a localized infection in a superficial wound, usually ≥ 3 days after injury. Infection may spread extensively along fascial planes, often with evident crepitation and abundant gas bubbling, but toxicity is much less severe than with extensive myonecrosis, and pain is minimal. Bullae are frequently evident, with foul-smelling, serous, brown exudate. Discoloration and gross edema of the extremity are rare. Clostridial skin infections associated with primary vascular occlusion of an extremity rarely progress to severe toxic myonecrosis or extend beyond the line of demarcation.

Clostridial myositis (suppurative infection of muscle without necrosis) is most common among parenteral drug users. It resembles staphylococcal pyomyositis and lacks the systemic symptoms of clostridial myonecrosis. Edema, pain, and frequently gas in the tissues occur. The infection spreads rapidly and may progress to myonecrosis.

In clostridial myonecrosis (gas gangrene), initial severe pain is common, sometimes even before other findings. The wound site may be pale initially, but it becomes red or bronze, often with blebs or bullae, and finally turns blackish green. The area is tensely edematous and tender to palpation. Crepitation is less obvious early than it is in clostridial cellulitis but is ultimately palpable in about 80%. Wounds and drainage have a particularly foul odor.

With progression, patients appear toxic, with tachycardia, pallor, and hypotension. Shock and renal failure occur, although patients often remain alert until the terminal stage. Bacteremia, sometimes with overt hemolysis, occurs in about 15% of patients with traumatic gas gangrene.

Whenever massive hemolysis occurs, mortality of 70 to 100%, due to acute renal failure and septicemia, can be expected.

Early suspicion and intervention are essential; clostridial cellulitis responds well to treatment, but myonecrosis has a mortality rate of ≥ 40% with treatment and 100% without treatment.

Clostridial soft-tissue infections are suspected based on clinical evaluation, particularly inspection of the wound and surrounding area (including the smell).

Although localized cellulitis, myositis, and spreading myonecrosis may be clinically distinct, differentiation often requires surgical exploration. In myonecrosis, muscle tissue is visibly necrotic; the affected muscle is a lusterless pink, then deep red, and finally gray-green or mottled purple and does not contract with stimulation. X-rays may show local gas production, and CT and MRI delineate the extent of gas and necrosis.

Wound exudate should be cultured for anaerobic and aerobic organisms. Because clostridia double in number every 7 minutes, anaerobic cultures of Clostridia may be positive in as little as 6 hours. However, other anaerobic and aerobic bacteria, including members of the Enterobacteriaceae family and Bacteroides, Streptococcus, and Staphylococcus species, alone or mixed, can cause severe clostridia-like cellulitis, extensive fasciitis, or myonecrosis (see Necrotizing Soft Tissue Infection Necrotizing Soft Tissue Infection Necrotizing soft tissue infection is typically caused by a mixture of aerobic and anaerobic organisms that cause necrosis of subcutaneous tissue, usually including the fascia. This infection... read more

). Also, many wounds, particularly if open, are contaminated with both pathogenic and nonpathogenic clostridia that are not responsible for the infection.

The presence of clostridia is significant when

However, if PMNs are abundant and the smear shows many chains of cocci, an anaerobic streptococcal or staphylococcal infection should be suspected. Abundant gram-negative bacilli may indicate infection with one of the Enterobacteriaceae or a Bacteroides species (see Mixed Anaerobic Infections Mixed Anaerobic Infections Anaerobes can infect normal hosts and hosts with compromised resistance or damaged tissues. Mixed anaerobic infections can include both single anaerobic species or multiple anaerobic species... read more ).

Detection of clostridial toxins in the wound or blood is useful only in the rare case of wound botulism Wound botulism Botulism is poisoning that is due to Clostridium botulinum toxin and that affects the peripheral nerves. Botulism may occur without infection if toxin is ingested, injected, or inhaled... read more .

When clinical signs of clostridial infection (eg, gas, myonecrosis) are present, rapid, aggressive intervention is mandatory. Thorough drainage and debridement are as important as antibiotics; both should be instituted rapidly.

Penicillin G 3 to 4 million units IV every 4 to 6 hours and clindamycin 600 to 900 mg IV every 6 to 8 hours (which inhibits toxin production) should be given immediately for severe cellulitis and myonecrosis. Clindamycin alone is inadequate. If gram-negative organisms are seen or suspected, a broad-spectrum antibiotic (eg, ticarcillin plus clavulanate, ampicillin plus sulbactam, piperacillin plus tazobactam, a carbapenem) should be used with clindamycin. If penicillin-allergic patients have a life-threatening clostridial infection, clindamycin, with metronidazole 500 mg IV every 6 hours, may be used; if other organisms are present, a non–beta-lactam broad-spectrum antibiotic such as a fluoroquinolone should be added along with vancomycin for Staphylococcus aureus.