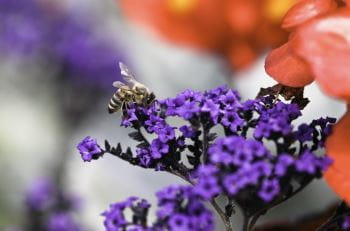 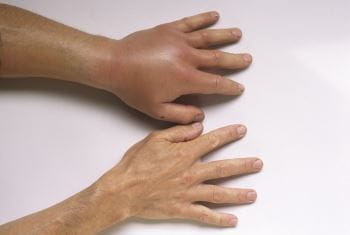 Stinging insects are members of the order Hymenoptera of the class Insecta. Hymenoptera venoms cause local toxic reactions in all people and allergic reactions only in those previously sensitized. Severity depends on the dose of venom and degree of previous sensitization. Patients exposed to swarm attacks and patients with high venom-specific IgE levels are most at risk of anaphylaxis Anaphylaxis Anaphylaxis is an acute, potentially life-threatening, IgE-mediated allergic reaction that occurs in previously sensitized people when they are reexposed to the sensitizing antigen. Symptoms... read more ; many children never outgrow the risk. The average unsensitized person can safely tolerate 22 stings/kg body weight; thus, the average adult can withstand > 1000 stings, whereas 500 stings can kill a child.

Unexpectedly large numbers of people seek medical attention for stings and their complications after hurricanes and possibly other environmental disasters.

Apids usually do not sting unless provoked; however, Africanized honeybees (killer bees), migrants from South America that reside in some southern and southwestern US states, are especially aggressive when agitated. Apids typically sting once and dislodge their barbed stinger into the wound, introducing venom and killing the insect. Melittin is thought to be the main pain-inducing component of the venom. The venom of Africanized honeybees is no more potent than that of other honeybees but causes more severe consequences because these insects attack in swarms and inflict multiple stings, increasing the dose of venom. In the US, bee stings cause 3 to 4 times more deaths than do venomous snakebites Snakebites Of about 3000 snake species throughout the world, only about 15% worldwide and 20% in the US are dangerous to humans because of venom or toxic salivary secretions (see table Significant Venomous... read more

Vespid stingers have few barbs and do not stay in the skin, so these insects can inflict multiple stings. The venom contains phospholipase, hyaluronidases, and the antigen 5 protein, which is the most allergenic. Although vespids also avoid stinging unless provoked, they nest close to humans, so provocative encounters are more frequent. Yellow jackets are the major cause of allergic reactions to insect stings in the US.

Fire ants are present in the southern US, particularly in the Gulf region, where in urban areas, they may sting as many as 40% of the population, causing at least 30 deaths/year. There are several species, but Solenopsis invicta predominates and is responsible for an increasing number of allergic reactions. The ant bites to anchor itself to the person and stings repeatedly as it rotates its body in an arc around the bite, producing a characteristic central bite partially encircled by a reddened sting line. The venom has hemolytic, cytolytic, antimicrobial, and insecticidal properties; 3 or 4 small aqueous protein fractions are probably responsible for allergic reactions.

Symptoms and Signs of Insect Stings

Local apid and vespid reactions are immediate burning, transient pain, and itching, with an area of erythema, swelling, and induration up to a few centimeters across. Swelling and erythema usually peak at 48 hours, can persist for a week, and can involve an entire extremity. This local chemical cellulitis is often confused with secondary bacterial cellulitis, which is more painful and uncommon after envenomation. Allergic reactions may manifest with urticaria, angioedema, bronchospasm, refractory hypotension, or a combination; swelling alone is not a manifestation of allergic reaction.

Symptoms and signs of a fire ant sting are immediate pain followed by a wheal and flare lesion, which often resolves within 45 minutes and gives rise to a sterile pustule, which breaks down within 30 to 70 hours. The lesion sometimes becomes infected and can lead to sepsis Sepsis and Septic Shock Sepsis is a clinical syndrome of life-threatening organ dysfunction caused by a dysregulated response to infection. In septic shock, there is critical reduction in tissue perfusion; acute failure... read more . In some cases, an edematous, erythematous, and pruritic lesion, rather than a pustule, develops. Anaphylaxis Anaphylaxis Anaphylaxis is an acute, potentially life-threatening, IgE-mediated allergic reaction that occurs in previously sensitized people when they are reexposed to the sensitizing antigen. Symptoms... read more due to fire ant stings probably occurs in < 1% of patients. Mononeuritis and seizures have been reported.

Diagnosis of insect stings is clinical. Apid stings are checked for the stinger. Upper and lower airways are assessed for signs of allergic reaction. Secondary bacterial cellulitis is rare but is considered when erythema and swelling begin a day or two after the sting (rather than immediately), there are systemic signs of infection (eg, fever, chills), and pain is significant.

Stingers, if present, should be removed as quickly as possible. Suggested methods include scraping with a thin dull edge (eg, edge of a credit card, dull side of a scalpel, thin table knife).

Pain, burning, and itching can be reduced by placing an ice cube wrapped in a cloth over the sting as soon as possible and giving oral H1 blockers, nonsteroidal anti-inflammatory drugs (NSAIDs), or both. Other possibly effective local measures include topical lotions, lidocaine patches, eutectic mixture of local anesthetic cream, intradermal injection of 1% lidocaine (with or without 1:100,000 epinephrine), and mid-potency corticosteroid creams or ointments (eg, triamcinolone 0.1%). Most folk remedies (eg, application of meat tenderizer) are of limited effectiveness.

Allergic reactions are treated with IV antihistamines; anaphylaxis Treatment Anaphylaxis is an acute, potentially life-threatening, IgE-mediated allergic reaction that occurs in previously sensitized people when they are reexposed to the sensitizing antigen. Symptoms... read more is treated with parenteral epinephrine and IV fluids and vasopressors if necessary.

People with known hypersensitivity to stings should carry a kit containing a prefilled syringe of epinephrine. They should use it as soon as possible after a sting and seek medical care immediately. People who have a history of anaphylaxis or a known allergy to insect bites should wear identification such as an alert bracelet.

People who have had anaphylaxis are at risk from subsequent insect stings. Desensitization immunotherapy can be considered. Venom immunotherapy Immunotherapy Allergic (including atopic) and other hypersensitivity disorders are inappropriate or exaggerated immune reactions to foreign antigens. Inappropriate immune reactions include those that are... read more is highly effective, reducing the chance of recurrent anaphylaxis from 50% to about 10% after 2 years of therapy and to about 2% after 3 to 5 years of therapy. Children who receive venom immunotherapy have a significantly lower risk of systemic reaction to stings 10 to 20 years after treatment. Venom immunotherapy seems to be safe for use during pregnancy. Single-venom therapy is adequate. After initial immunotherapy, maintenance doses may be needed for up to 5 years.