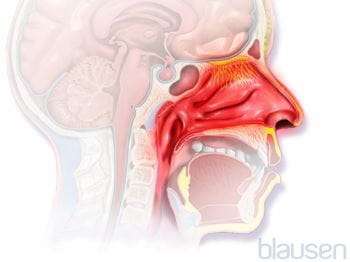 Allergic Rhinitis
Seasonal allergies result from exposure to airborne substances (such as pollens) that appear only during certain times of the year.

Seasonal allergies (commonly called hay fever) are common. They occur only during certain times of the year—particularly the spring, summer, or fall—depending on what a person is allergic to. Symptoms involve primarily the membrane lining the nose, causing allergic rhinitis Allergic Rhinitis Rhinitis is inflammation and swelling of the mucous membrane of the nose, characterized by a runny nose and stuffiness and usually caused by the common cold or a seasonal allergy. Colds and... read more

The term hay fever is somewhat misleading because symptoms do not occur only in the summer when hay is traditionally gathered and never include fever. Hay fever is usually a reaction to pollens and grasses. The pollens that cause hay fever vary by season:

Also, different parts of the country have very different pollen seasons. In the western United States, mountain cedar (a juniper) is one of the main sources of tree pollen from December to March. In the arid Southwest, grasses pollinate for much longer, and in the fall, pollen from weeds, such as sagebrush and Russian thistle, can cause hay fever. People may react to one or more pollens, so their pollen allergy season may be from early spring to late fall. Seasonal allergy is also caused by mold spores, which can be airborne for long periods of time during the spring, summer, and fall.

Allergic conjunctivitis may result when airborne substances, such as pollens, contact the eyes directly.

Hay fever can make the nose, roof of the mouth, back of the throat, and eyes itch. Itching may start gradually or abruptly. The nose runs, producing a clear watery discharge, and may become stuffed up. In children, the stuffy nose may lead to an ear infection. The lining of the nose may become swollen and bluish red.

The sinuses may also become stuffed up, causing headaches and occasionally sinus infections (sinusitis Sinusitis Sinusitis is inflammation of the sinuses, most commonly caused by a viral or bacterial infection or by an allergy. Some of the most common symptoms of sinusitis are pain, tenderness, nasal congestion... read more ). Sneezing is common.

Other symptoms include coughing and wheezing (especially in people who also have asthma) and sometimes irritability and trouble sleeping.

The severity of symptoms varies with the seasons.

Many people who have allergic rhinitis also have asthma Asthma Asthma is a condition in which the airways narrow—usually reversibly—in response to certain stimuli. Coughing, wheezing, and shortness of breath that occur in response to specific triggers are... read more

(which results in wheezing), possibly caused by the same allergy triggers (allergens) that contribute to allergic rhinitis and conjunctivitis.

The diagnosis of seasonal allergies is based on symptoms plus the circumstances in which they occur—that is, whether they occur only during certain seasons. This information can also help doctors identify the allergen.

Typically, no testing is necessary, but occasionally, the nasal discharge is examined to see whether it contains eosinophils (a type of white blood cell produced in large numbers during an allergic reaction).

can help confirm the diagnosis and identify the allergen. For these tests, a drop of each extract is placed on the person’s skin, which is then pricked with a needle. Doctors then watch to see if there is a wheal and flare reaction (a pale, slightly elevated swelling surrounded by a red area)

is done if results of the skin test are unclear. For this test, a sample of blood is withdrawn and tested.

A corticosteroid nasal spray is usually very effective and is used first. Most of these sprays have few side effects, although they can cause nosebleeds and a sore nose.

Many antihistamine-decongestant combinations are available over the counter as a single tablet. However, people with high blood pressure should not take a decongestant unless a doctor recommends it and monitors its use. Also, people who take a monoamine oxidase inhibitors (a type of antidepressant) cannot take a product that combines an antihistamine and a decongestant.

Antihistamines may have side effects, particularly anticholinergic effects Anticholinergic: What Does It Mean? Drugs, the most common medical intervention, are an important part of medical care for older people. Without drugs, many older people would function less well or die at an earlier age. Older... read more

Decongestants are also available over the counter as nose drops or sprays. They should not be used for more than a few days at a time because using them continually for a week or more may worsen or prolong nasal congestion—called a rebound effect—and may eventually result in chronic congestion.

Side effects tend to be fewer and less severe with nasal sprays than with drugs taken by mouth.

Other drugs are sometimes useful. Cromolyn is available by prescription as a nasal spray and may help relieve a runny nose. To be effective, it must be used regularly. Azelastine (an antihistamine) and ipratropium, both available by prescription as nasal sprays, may be effective. But these drugs can have anticholinergic effects similar to those of antihistamines taken by mouth, especially drowsiness.

Montelukast, a leukotriene modifier available by prescription, reduces inflammation and helps relieve a runny nose. It is best used only when other drugs are ineffective. Possible side effects include confusion, anxiety, depression, and abnormal muscle movements.

Regularly flushing out the sinuses with a warm water and salt (saline) solution may help loosen and wash out mucus and hydrate the nasal lining. This technique is called sinus irrigation.

When these treatments are ineffective, a corticosteroid may be taken by mouth or by injection for a short time (usually for fewer than 10 days). If taken by mouth or injection for a long time, corticosteroids Corticosteroids: Uses and Side Effects Rheumatoid arthritis is an inflammatory arthritis in which joints, usually including those of the hands and feet, are inflamed, resulting in swelling, pain, and often destruction of joints.... read more

can have serious side effects.

Bathing the eyes with plain eyewashes (such as artificial tears) can help reduce irritation. Any substance that may be causing the allergic reaction should be avoided. Contact lenses should not be worn during episodes of conjunctivitis.

containing antihistamines and a drug that causes blood vessels to narrow (a vasoconstrictor) are often effective. These eye drops are available without a prescription. However, they may be less effective and have more side effects than prescription eye drops.

Eye drops containing cromolyn, available by prescription, are used to prevent rather than relieve allergic conjunctivitis. They can be used when exposure to the allergen is anticipated.

If symptoms are very severe, eye drops containing corticosteroids, available by prescription, may be used. During treatment with corticosteroid eye drops, the eyes should be checked regularly for increased pressure and infection by an ophthalmologist.

Antihistamines taken by mouth (such as fexofenadine) may also be helpful, especially when other areas of the body (such as the ears, nose, or throat) are also affected by the allergies.

Immunotherapy is needed in the following situations: