Full review/revision Apr 2022 | Modified Sep 2022
VIEW PROFESSIONAL VERSION
Topic Resources
Any of several types of the gram-negative bacteria Overview of Gram-Negative Bacteria Bacteria are classified by how they appear under the microscope and by other features. Gram-negative bacteria are classified by the color they turn after a chemical process called Gram staining... read more Pseudomonas, especially Pseudomonas aeruginosa, can infect different parts of the body, particularly in people who have serious medical problems or who are hospitalized.

Pseudomonas bacteria, including Pseudomonas aeruginosa, are present throughout the world in soil and water. These bacteria favor moist areas, such as sinks, toilets, inadequately chlorinated swimming pools and hot tubs, and outdated or inactivated antiseptic solutions. Occasionally, these bacteria are present in the armpits and genital area of healthy people.

These bacteria can infect the blood, skin, bones, ears, eyes, urinary tract, heart valves, and lungs, as well as wounds (such as burns, injuries, or wounds made during surgery). Use of medical devices, such as catheters inserted into the bladder or a vein, breathing tubes, and mechanical ventilators, increase the risk of Pseudomonas aeruginosa infections. These infections are commonly acquired in hospitals. In hospitals, the bacteria are often present in sinks, antiseptic solutions, and containers used to collect urine from a bladder catheter.

Swimmer’s ear (external otitis Ear Canal Infection (Swimmer's Ear) Bacteria and sometimes fungi can cause acute infection of the skin of the ear canal. Ear canal infection is caused by bacteria or, less commonly, fungi. Typical symptoms are pain and discharge... read more ) is a mild external infection that can occur in otherwise healthy people. Water containing the bacteria can enter the ear during swimming. Swimmer’s ear causes itching, pain, and sometimes a discharge from the ear.

Malignant external otitis Malignant External Otitis Malignant external otitis is a dangerous infection of the external ear that has spread to the skull bone (temporal bone) containing the ear canal, the middle ear, and the inner ear. Malignant... read more is a more severe external ear infection. It is most common among people with diabetes. Tissues become swollen and inflamed, partly or completely closing the ear canal. Symptoms may include fever, loss of hearing, inflammation of tissues around the infected ear, severe ear pain, a foul-smelling discharge from the ear, and nerve damage.

is another mild external infection. Hair roots (follicles) become infected in people who use hot tubs or whirlpools, particularly if the hot tubs and whirlpools are inadequately chlorinated. Spending a lot of time in the water softens the follicles, making them easier for bacteria to invade. An itchy rash consisting of tiny pimples develops. Pimples may have a drop of pus in their center. 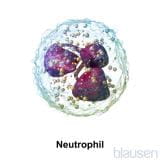 ). The sore has a purple-black center and is surrounded by a band of red. These sores usually occur in moist areas, such as the armpit or genital areas.

Eye infections due to these bacteria may damage the cornea, often permanently. Enzymes produced by the bacteria can rapidly destroy the eye. Infections usually result from injuries but may result from contamination of contact lenses or contact lens solution.

Soft-tissue infections include those in muscle, tendons, ligaments, fat, and skin. These infections can occur in deep puncture wounds (for example, stepping on a nail). Pseudomonas bacteria can also infect pressure sores, burns, and wounds due to injuries or surgery. When these bacteria grow in soiled dressings, the dressings turn green and smell like newly mowed grass. Fluids draining from these wounds often have a sweet, fruity smell.

Severe pneumonia Hospital-Acquired Pneumonia Hospital-acquired pneumonia is lung infection that develops in people who have been hospitalized, typically after about 2 days or more of hospitalization. Many bacteria, viruses, and even fungi... read more can develop in hospitalized people, especially those who need to use a breathing tube and a mechanical ventilator. In people with HIV infection, Pseudomonas bacteria commonly cause pneumonia or sinus infections.

Urinary tract infections Overview of Urinary Tract Infections (UTIs) In healthy people, urine in the bladder is sterile—no bacteria or other infectious organisms are present. The tube that carries urine from the bladder out of the body (urethra) contains no bacteria... read more usually develop in the following circumstances:

Sometimes the source of the bacteria is unknown, as may occur in people who have too few white blood cells after cancer chemotherapy. Purple-black spots surrounded by a red rim on the skin (ecthyma gangrenosum) often develop in the armpits and groin. Without treatment, a bloodstream infection can lead to shock and death.

Bone and joint infections usually occur in the spine, pubic bone, and/or the joint between the collarbone and breastbone. The bacteria usually spread to bones and joints from the bloodstream, particularly in people who use illegal intravenous drugs. Less often, the bacteria spread from nearby soft tissues that have been infected after an injury or surgery.

Heart valve infections are rare. They usually occur in people who inject intravenous drugs and in people with artificial heart valves. The bacteria usually spread to heart valves from the bloodstream.

Doctors diagnose Pseudomonas aeruginosa infections by taking a sample of blood or other body fluids and sending it to a laboratory to grow (culture) and identify the bacteria.

Tests to determine which antibiotics are likely to be effective (susceptibility tests Testing a Microorganism's Susceptibility and Sensitivity to Antimicrobial Drugs Infectious diseases are caused by microorganisms, such as bacteria, viruses, fungi, and parasites. Doctors suspect an infection based on the person's symptoms, physical examination results,... read more ) are also done.

Swimmer’s ear can be effectively treated, as well as prevented, by irrigating the ears with an acetic acid (vinegar) solution before and after swimming. Or the infection can be treated with a topical antibiotic such as polymyxin applied to the ear.

Eye infections are treated with highly concentrated antibiotic drops, applied frequently at first. Sometimes antibiotics must be injected directly into the eye.

Serious infections due to Pseudomonas aeruginosa are difficult to treat. Malignant external otitis, internal infections (such as pneumonia or heart valve infection), and blood infections require weeks of antibiotics given intravenously. Usually, one antibiotic, such as ceftazidime or ciprofloxacin, is effective. But sometimes a combination of antibiotics is required because many strains, particularly those acquired in health care facilities, are resistant to many antibiotics. Doctors initially choose an antibiotic that is usually effective in their geographic area. They may change the antibiotics after test results indicate which antibiotics are likely to be effective.