The Ureters, Bladder, and Urethra

Smoking is the greatest single risk factor and seems to be one of the causes in at least half of all new cases. Certain chemicals that are used in industry can become concentrated in the urine and cause cancer, although exposure to these chemicals is decreasing. These chemicals include hydrocarbons, aniline dyes (such as naphthylamine used in the dye industry) and chemicals used in the rubber, electric, cable, paint, and textile industries. Long-term exposure to some drugs, especially cyclophosphamide, increases the risk of bladder cancer. The chronic irritation that occurs with a parasitic infection called schistosomiasis Schistosomiasis Schistosomiasis is infection caused by certain flatworms (flukes), called schistosomes. People acquire schistosomiasis by swimming or bathing in fresh water that is contaminated with the flukes... read more or with a bladder stone Stones in the Urinary Tract Stones (calculi) are hard masses that form in the urinary tract and may cause pain, bleeding, or an infection or block of the flow of urine. Tiny stones may cause no symptoms, but larger stones... read more

also predisposes people to bladder cancer, although irritation accounts for only a small number of all cases.

Most bladder cancers are of a type called transitional cell, affecting the same kinds of cells (transitional cells) that are usually the cancerous cells responsible for cancers of the renal pelvis and ureters Renal Pelvis and Ureter Cancer Cancers may cause blood in the urine or crampy pain in the side. Diagnosis is usually by computed tomography. Treatment is removal of the kidney and ureter. Cancer can occur in the cells lining... read more .

Bladder cancer most often causes blood in the urine. Other symptoms may include pain and burning during urination and an urgent, frequent need to urinate. The symptoms of bladder cancer may be identical to those of a bladder infection (cystitis Bladder Infection Cystitis is infection of the bladder. Usually, bacteria are the cause of cystitis. A frequent need to urinate and pain or burning while urinating are the most common symptoms. Doctors can often... read more 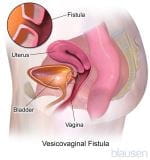 ), and the two problems may occur together. A low blood count (anemia Overview of Anemia Anemia is a condition in which the number of red blood cells is low. Red blood cells contain hemoglobin, a protein that enables them to carry oxygen from the lungs and deliver it to all parts... read more ) may cause fatigue, paleness, or both.

Most bladder cancers are diagnosed by cystoscopy Cystoscopy A doctor can diagnose some disorders of the bladder and urethra (for example, bladder tumors, stones in the bladder, benign prostatic enlargement) by looking through a flexible viewing tube... read more and biopsy Bladder biopsy Site-specific biopsies and cell sampling are also used in the evaluation of people with suspected kidney and urinary tract disorders. (See also Overview of the Urinary Tract.) A kidney biopsy... read more . This examination involves passing a thin, flexible viewing tube through the urethra into the bladder. A small sample of tissue is removed for examination. The person is awake. The urethra is anesthetized somewhat so the procedure is not too uncomfortable.

If the cancer has invaded the bladder muscle, additional testing, including abdominal CT and chest x-ray, is needed to determine whether a cancer has spread.

For cancers that remain on the bladder’s inner surface (superficial tumors) and grow and divide slowly, the risk of death from bladder cancer is less than 5% in the 5 years after diagnosis. The 5-year death rate for tumors that invade the bladder muscle is significantly higher (about 50%), but chemotherapy may improve survival. Cancers that have spread beyond the bladder wall (such as to the lymph nodes or other abdominal or pelvic organs) have a much poorer prognosis.

Cancers that are on only the bladder’s inner surface may be removed completely during cystoscopy. However, people commonly develop new cancers later within the bladder. Doctors may be able to prevent the recurrence of these cancers by repeatedly putting anticancer drugs (such as gemcitabine or mitomycin C) or bacille Calmette-Guérin (BCG—a substance that stimulates the body’s immune system) into the bladder after all of the cancer has been removed.

Cancers that have grown into the bladder wall cannot be completely removed through a cystoscope. They are usually treated by total or partial removal of the bladder (cystectomy). Chemotherapy is usually given before removing the bladder as this has been shown to improve survival compared to cystectomy alone. Radiation therapy alone or in combination with chemotherapy may also be used in an attempt to cure the cancer.

If the entire bladder needs to be removed, doctors must devise a method for the person to be able to drain urine. The usual way has been to route the urine to an opening (stoma) made in the abdominal wall through a passageway made of intestine, called an ileal loop. The urine is then collected in a bag worn on the outside of the body.

Several alternative methods of diverting urine are becoming increasingly common and are appropriate for many people. These methods can be grouped into two categories: an orthotopic neobladder and a continent urinary diversion. In both, an internal reservoir for urine is constructed from the intestine.

For an orthotopic neobladder, the reservoir is connected to the urethra. The person learns to empty this reservoir by relaxing the pelvic floor muscles and increasing pressure within the abdomen, so that urine passes through the urethra very much as it would naturally. Most people are dry during the day, but some urine leakage may occur at night.

For a continent urinary diversion, the reservoir is connected to a stoma in the abdominal wall. A collecting bag is not needed, because the urine remains in the reservoir until the person empties it by inserting a catheter through the stoma into the reservoir, which is done at regular intervals throughout the day. The most common of these is known as an Indiana pouch and is made from a part of the colon.

Cancer that has spread beyond the bladder to the lymph nodes or other organs is treated with chemotherapy. Several different combinations of drugs are active against this type of cancer, particularly when the spread is confined to the lymph nodes. Cystectomy or radiation therapy Radiation Therapy for Cancer Radiation is a form of intense energy generated by a radioactive substance, such as cobalt, or by specialized equipment, such as an atomic particle (linear) accelerator. Radiation preferentially... read more , including external beam radiation, may be offered to people who respond well to chemotherapy. However, a relatively small number of people are cured. For people who are not cured, efforts are directed at pain relief and end-of-life issues (see Symptoms During a Fatal Illness Symptoms During a Fatal Illness Many fatal illnesses cause similar symptoms, including pain, shortness of breath, digestive problems, incontinence, skin breakdown, and fatigue. Depression and anxiety, confusion and unconsciousness... read more ).

Cancer of the Uterus