Zika virus is similar to the viruses that cause dengue, yellow fever, West Nile fever, and chikungunya disease. Zika virus is transmitted by mosquitoes. The mosquito that transmits most cases of Zika virus, the yellow fever mosquito, is restricted, in the United States, to the deep South, but another type, the Asian tiger mosquito, has adapted to colder climates and is present across a large portion of the southeastern United States (see map). It is not clear whether this mosquito will be able to transmit Zika virus infection in the more temperate climate of the United States.


Where is the Zika Virus Found and How is it Transmitted?

Zika virus was first isolated from monkeys in the Zika Forest in Uganda in 1947, but it was not considered an important cause of disease in humans until the first large-scale outbreaks appeared in the South Pacific islands in 2007. By March 2014, tourists were believed to have carried Zika virus to Easter Island, about 2,180 miles west of continental Chile. In May 2015, local transmission was first reported in South America, then in Central America, and then in the Caribbean, finally reaching Mexico by late November 2015. 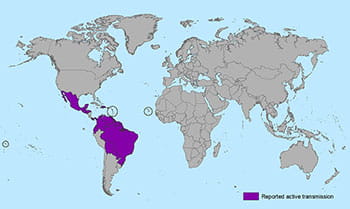 The CDC has issued specific guidelines to doctors about when people, especially pregnant women, should be tested for Zika virus infection.

How likely is there actually an increased incidence of microcephaly? Undoubtedly there is a true increase given the numerous reports of Brazilian pediatricians who are witnessing a dramatic increase in the number of cases of microcephaly.

How likely is the Zika virus epidemic to continue to grow? Zika virus infection is similar to other infections transmitted by the same mosquitoes, so Zika virus will likely spread in the same way, unless its transmission is interrupted by an effective Zika virus vaccine or control of the mosquito population.

Prevention: Until more is known, the CDC. has recommended that pregnant women consider postponing travel to places with active Zika virus transmission. (http://www.cdc.gov/zika/pregnancy/question-answers.html).

There is currently no vaccine to prevent Zika virus infection. Control of this infection depends on control of  the mosquitoes that transmit the virus and prevention of mosquito bites when traveling to countries where Zika virus is endemic. The following precautions should be taken:

Dr. Levison is The Manuals' Editorial Board reviewer for Infections.