“There is no greater power in the world than the zest of a postmenopausal woman.”

This quote from anthropologist and writer Margaret Mead captures just how empowering menopause can be for women. It’s a universal experience of entering life’s next chapter shared by all women throughout history. Yet society too often focuses on the difficulties of menopause rather than on it as a milestone that brings a new phase of confidence and leadership in many cultures around the world.

As a result, many myths and misconceptions about menopause persist, leaving women and those around them to take on the task of separating fact from fiction as they seek to understand this life transition. Here are five of the most persistent myths surrounding menopause – with facts to set the record straight.

Myth #1 – Menopause begins when a woman stops having her period

Myth #2 – Hot flashes are the only symptom of menopause

Most symptoms occur during perimenopause and early in postmenopause, with about 75% of women experiencing hot flashes—some women like to refer to them as power surges. During a hot flash, the temperature regulation center of the brain is not working correctly, causing the blood vessels near the surface of the skin to dilate, increasing blood flow. As a result, women will feel warm or hot, and perspiration may be profuse. Another common symptom is difficulty sleeping, this can happen when a hot flash causes women to wake up during the night. Women may also experience problems with sleep even when they are not having a hot flash. Other symptoms include changes in mood or feelings of forgetfulness. For many women, it may be helpful to look to the experiences their mother and sisters had to better understand what they can expect as they approach perimenopause. Some women may notice vaginal dryness or painful sex.

Myth #3 – Menopause leads to a decrease in sex drive

Many women experience a decrease in libido as they get older, but it is complex to define what a normal sex drive is and which factors have the most impact on sexual desire. Research has not provided definite conclusions about whether age or hormonal changes are the most important contributors. Also, other symptoms of menopause, such as mood changes, sleep disturbance, or vaginal dryness may have an effect of sexual function. For many women, when these issues are treated, sexual function improves as well.

Despite how it’s often portrayed or discussed, menopause is not an illness—it’s a natural process. However, there are steps women can take to ease some of the symptoms of menopause, beginning with maintaining healthy sleep practices, adjusting clothing and room temperature to stay cooler, and managing stress. In addition to lifestyle changes, there are nonhormonal therapies and cooling devices that may help. For vaginal dryness, lubricants and vaginal moisturizers are very helpful. Medications may also provide relief for common menopause symptoms. Hormone therapy can be an effective way to manage symptoms such as hot flashes and vaginal dryness if nonhormonal methods have not been successful.

As women approach their mid-40s or begin to experience menstrual irregularity or menopausal symptoms, it’s important to have a conversation with a healthcare provider about what to expect and how to manage symptoms. Primary care clinicians and gynecologists knowledgeable about menopause are the best place to start. If symptoms are severe and difficult to treat or if there are other medical concerns such as diabetes, a family history of breast cancer, or migraine headaches, a woman may want to find a physician who specializes in menopause.

Myth #5 – There are no benefits to menopause

For more about menopause, visit the Manuals page or the Quick Facts page on the topic. 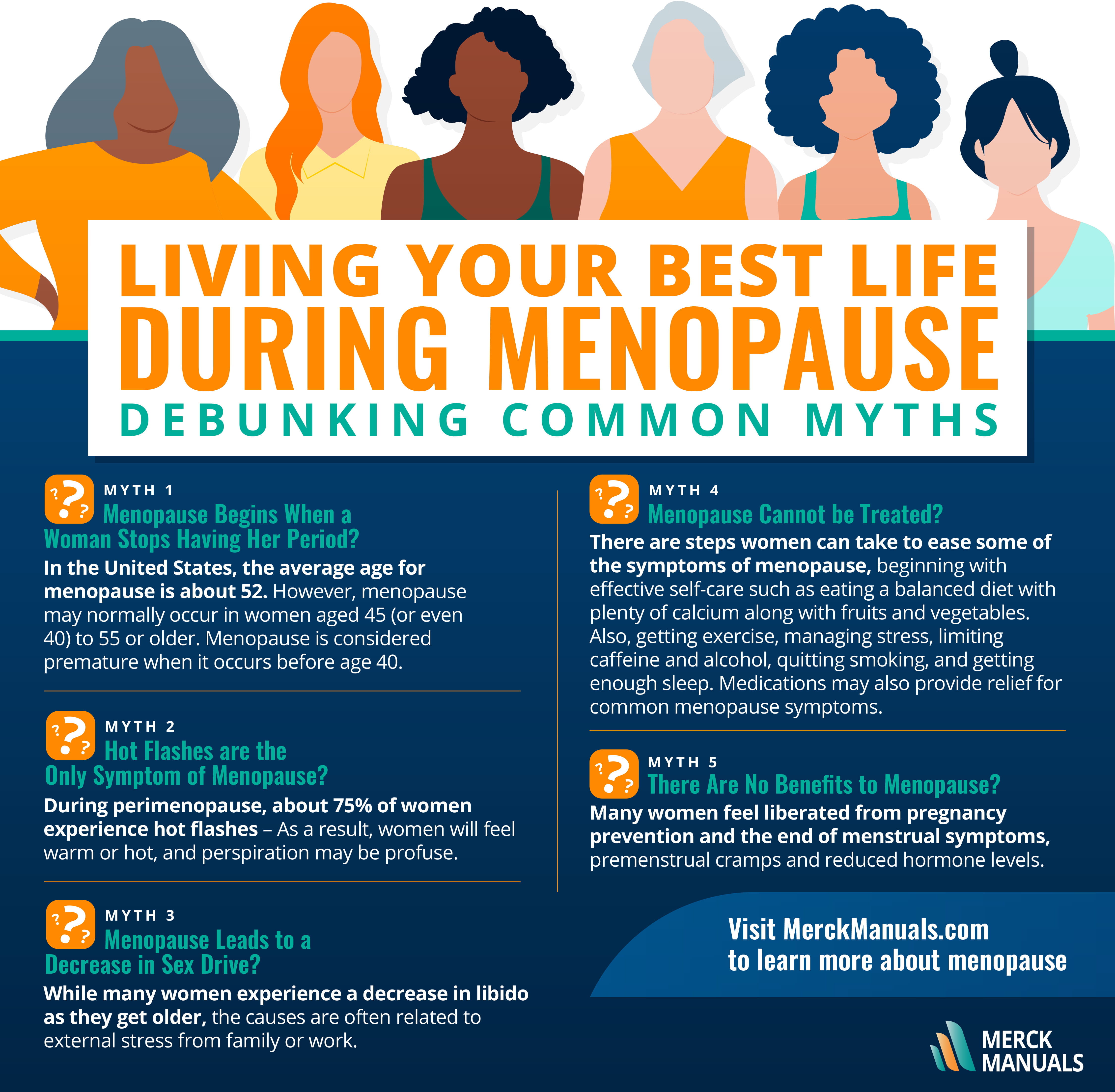