Cancer of the Uterus 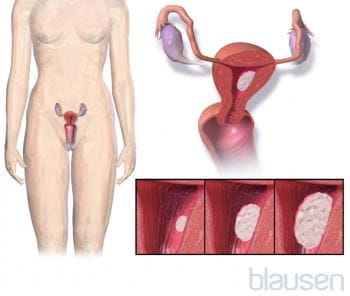 Most cancers of the uterus begin in the lining of the uterus (endometrium) and are more precisely termed endometrial cancer (carcinoma). In the United States, it is the most common gynecologic cancer and the fourth most common cancer among women. This cancer usually develops after menopause, most often in women aged 50 to 60. Over 90% of cases occur in women over 50.

About 75 to 80% of endometrial cancers are adenocarcinomas, which develop from gland cells. Fewer than 5% of cancers in the uterus are sarcomas. Sarcomas develop from connective tissue and tend to be more aggressive.

Endometrial cancer is more common in developed countries where the diet is high in fat.

The most important risk factors for endometrial cancer are

Other risk factors for endometrial cancer include the following:

Conditions that result in a high level of estrogen but not progesterone include the following:

Estrogen promotes the growth of tissue and rapid cell division in the lining of the uterus (endometrium). Progesterone helps balance the effects of estrogen. Levels of estrogen are high during part of the menstrual cycle. Thus, having more menstrual periods during a lifetime may increase the risk of endometrial cancer. Tamoxifen, a drug used to treat breast cancer, blocks the effects of estrogen in the breast, but it has the same effects as estrogen in the uterus. Thus, this drug may increase the risk of endometrial cancer. Taking oral contraceptives Oral Contraceptives Contraceptive hormones can be Taken by mouth (oral contraceptives) Inserted into the vagina (vaginal rings or barrier contraceptives) Applied to the skin (patch) Implanted under the skin read more

that contain estrogen and a progestin appears to reduce the risk of endometrial cancer.

In about 5% of women with endometrial cancer, heredity plays a role. About half of endometrial cancers that involve heredity occur in women who have or who have relatives who have a hereditary form of colon cancer called Lynch syndrome (hereditary nonpolyposis colorectal cancer Lynch syndrome (hereditary nonpolyposis colorectal carcinoma [HNPCC]) Family history and some dietary factors (low fiber, high fat) increase a person’s risk of colorectal cancer. Typical symptoms include bleeding during a bowel movement, fatigue, and weakness... read more

Doctors may suspect endometrial cancer if one of the following is present:

If cancer is suspected, doctors take a sample of tissue from the endometrium (endometrial biopsy Uterus Sometimes doctors recommend screening tests, which are tests that are done to look for disorders in people who have no symptoms. If women have symptoms related to the reproductive system (gynecologic... read more

) in their office and send it to a laboratory for analysis. An endometrial biopsy accurately detects endometrial cancer more than 90% of the time.

If the diagnosis is still uncertain or suggests cancer, doctors scrape tissue from the uterine lining for analysis—a procedure called dilation and curettage Dilation and Curettage Sometimes doctors recommend screening tests, which are tests that are done to look for disorders in people who have no symptoms. If women have symptoms related to the reproductive system (gynecologic... read more

If endometrial cancer is diagnosed, some or all of the following procedures may be done:

If results of the physical examination or other tests suggest that the cancer has spread beyond the uterus, computed tomography (CT) is done. Other procedures are sometimes required.

Staging is based on information obtained from these procedures and during surgery to remove the cancer.

Prognosis depends on the stage of the endometrial cancer.

Overall, 63% of women are cancer-free 5 years after treatment.

Generally, the prognosis is better if

Prognosis is generally worse with sarcomas than with adenocarcinomas in women with endometrial cancer.

(surgical removal of the uterus) is the mainstay of treatment for women who have endometrial cancer. Unless the cancer is very advanced, hysterectomy improves the prognosis.

Nearby lymph nodes Overview of the Lymphatic System The lymphatic system is a vital part of the immune system. It includes organs such as the thymus, bone marrow, spleen, tonsils, appendix, and Peyer patches in the small intestine that produce... read more

are usually removed at the same time. These tissues are examined by a pathologist to determine whether the cancer has spread and, if so, how far it has spread. With this information, doctors can determine whether additional treatment (chemotherapy, radiation therapy, or a progestin) is needed after surgery. When the cancer appears confined to the uterus, doctors may do sentinel lymph node dissection Sentinel lymph node dissection Cancer of the uterus develops in the lining of the uterus (endometrium) and is thus also called endometrial cancer. Endometrial cancer usually affects women after menopause. It sometimes causes... read more

instead of removing all the lymph nodes.

Doctors can remove the uterus, fallopian tubes, and ovaries using one of the following methods:

Treatment of endometrial cancer that has not spread outside the uterus

Treatment of endometrial cancer that has spread to the cervix or to nearby tissues, the vagina, or lymph nodes

If cancer has spread to the cervix (stage II) or to nearby tissues, the vagina, or lymph nodes (stage III), radiation therapy, with or without chemotherapy, is required. Surgery to remove the uterus, fallopian tubes, and ovaries is usually also done.

For very advanced cancer (stage IV), treatment varies but usually involves a combination of surgery, radiation therapy, chemotherapy, and occasionally hormone therapy with a progestin (a synthetic drug similar to the hormone progesterone).

If the cancer has spread to distant organs or recurs, chemotherapy drugs (such as carboplatin, cisplatin, doxorubicin, and paclitaxel) may be used instead of or sometimes with radiation therapy. These drugs reduce the cancer’s size and control its spread in more than half of women treated. However, these drugs are toxic and have many side effects.

Sometimes progestins are used. These drugs are much less toxic than chemotherapy drugs.

Treatment of sarcoma of the uterus

For sarcoma of the uterus (a more aggressive form of endometrial cancer), treatment is hysterectomy plus removal of the fallopian tubes and ovaries (salpingo-oophorectomy) and usually chemotherapy.

If surgery is not possible, radiation and/or chemotherapy is used.

A hysterectomy is the removal of the uterus.

Because of advances in technology, hysterectomy may also be done using laparoscopic or robotic-assisted laparoscopic surgery.

After either laparoscopic procedure, the hospital stay is only 1 day. Women usually have less pain and fewer complications and can return more quickly to normal activities after laparoscopic surgery than after open surgery (which involves a larger incision).

In addition to treating certain gynecologic cancers, a hysterectomy may be used to treat prolapse of the uterus, endometriosis, or fibroids (if causing severe symptoms). Sometimes it is done as part of the treatment for cancer of the colon, rectum, or bladder.

There are several types of hysterectomy. The type used depends on the disorder being treated.

or vaginal cancer Treatment Cancer of the vagina, an uncommon cancer, usually develops in the cells lining the vagina, typically in women over 60. Vaginal cancer may cause abnormal vaginal bleeding, particularly after... read more , treatment may include radical hysterectomy.

After a hysterectomy, menstruation stops. However, a hysterectomy does not cause menopause unless the ovaries are removed also. Removal of the ovaries has the same effects as menopause, so hormone therapy Hormone Therapy for Menopause Menopause is the permanent end of menstrual periods and thus of fertility. For up to several years before and just after menopause, estrogen levels fluctuate widely, periods become irregular... read more

Many women anticipate feeling depressed or losing interest in sex after a hysterectomy. However, hysterectomy rarely has these effects unless the ovaries are also removed.

If menopausal symptoms such as hot flashes and vaginal dryness become bothersome after the uterus is removed, hormones such as estrogen, a progestin, or both can taken to relieve them. This treatment is safe and does not increase the risk of developing cancer again.

A sentinel lymph node What Is a Sentinel Lymph Node? Breast cancer occurs when cells in the breast become abnormal and divide uncontrollably. Breast cancer usually starts in the glands that produce milk (lobules) or the tubes (ducts) that carry... read more

To identify sentinel lymph nodes, doctors inject a blue or green dye and/or a radioactive substance, usually into the cervix. These substances travel to the lymph nodes near the uterus and map the pathway from the uterus to the lymph node (or nodes) nearest the uterus. During surgery, doctors check for lymph nodes that look blue or green or that give off a radioactive signal (detected by a handheld device). Doctors remove this node (or nodes) and send it to a laboratory to be checked for cancer. If the sentinel lymph node or nodes do not contain cancer cells, no other lymph nodes are removed (unless they look abnormal).

When the cancer appears confined to the uterus, doctors may do sentinel lymph node mapping and dissection instead of removing all the lymph nodes.

Treatment with radical hysterectomy, chemotherapy, and/or radiation therapy usually makes it impossible for women to become pregnant or to carry a pregnancy to term. However, advances in assisted reproductive techniques Assisted Reproductive Techniques Assisted reproductive techniques involve manipulating sperm and eggs or embryos in a laboratory (in vitro) with the goal of producing a pregnancy. (See also Overview of Infertility.) If treatment... read more

may enable women to have a child after these procedures. If being able to have children is important to them, women should talk to their doctor and get as much information as possible about risks of and requirements for these procedures, as well as the likelihood of becoming pregnant and having a child after such a procedure.

If endometrial cancer is in a very early stage, fertility preservation treatment can sometimes be used. Magnetic resonance imaging (MRI) is done to determine whether the tumor has spread, and a fertility specialist is consulted.

In fertility-preserving surgery, doctors remove only the tumor and the tissue around and under the tumor.