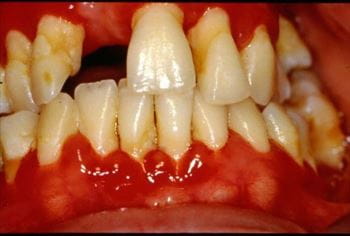 Gingivitis
Gingivitis is a type of periodontal disease Periodontitis Periodontitis is a chronic inflammatory oral disease that progressively destroys the tooth-supporting apparatus. It usually manifests as a worsening of gingivitis and then, if untreated, with... read more

characterized by inflammation of the gums (gingivae), causing bleeding with swelling, redness, exudate, a change of normal contours, and, occasionally, discomfort. Diagnosis is based on inspection. Treatment involves professional teeth cleaning and intensified home dental hygiene. Advanced cases may require antibiotics or surgery.

Normally, the gingivae are firm, tightly adapted to the teeth, and contoured to form fine interdental points. Keratinized gingiva near the crowns is pink stippled tissue. This tissue should fill the entire space between the crowns. The gingiva farther from the crowns, called alveolar mucosa, is nonkeratinized, highly vascular, red, movable, and continuous with the buccal mucosa. A tongue depressor should express no blood or pus from normal gingiva.

Almost all gingivitis is plaque induced. Mineralized plaque is a concretion of bacteria, food residue, saliva, and mucus with calcium and phosphate salts. Poor oral hygiene allows plaque to accumulate between the gingiva and the teeth; gingivitis does not occur in places where teeth are missing. Irritation due to plaque deepens the normal crevice (sulcus) between the tooth and gingiva, creating gingival pockets. These pockets contain bacteria that may cause gingivitis and root caries. Other local factors, such as malocclusion, dental calculus, food impaction, faulty dental restorations, and xerostomia Xerostomia Xerostomia is dry mouth caused by reduced or absent flow of saliva. This condition can result in discomfort, interfere with speech and swallowing, make wearing dentures difficult, cause halitosis... read more , play a secondary role.

Plaque-induced gingivitis may be precipitated or exacerbated by hormonal changes, systemic disorders, drugs, or nutritional deficiencies.

Hormonal changes that occur at puberty, during menstrual cycles and pregnancy, and at menopause or that are due to oral (or injectable) contraceptives may exacerbate inflammation.

Systemic disorders (eg, diabetes, AIDS, vitamin deficiency, leukemia, leukopenia) can affect the response to infection. Some patients with Crohn disease Crohn Disease Crohn disease is a chronic transmural inflammatory bowel disease that usually affects the distal ileum and colon but may occur in any part of the gastrointestinal tract. Symptoms include diarrhea... read more 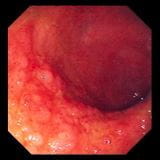 have a cobblestone area of granulomatous gingival hypertrophy when intestinal flare-ups occur.

Exposure to heavy metals (eg, lead, bismuth) may cause gingivitis and a dark line at the gingival margin.

Symptoms and Signs of Gingivitis

Simple gingivitis first causes a deepening of the sulcus between the tooth and gingiva, followed by a band of red, inflamed gingiva along one or more teeth, with swelling of the interdental papillae and easily induced bleeding. Pain is usually absent. The inflammation may resolve, remain superficial for years, or occasionally progress to periodontitis.

Pericoronitis is acute, painful inflammation of the gingival flap (operculum) over a partly erupted tooth, usually around mandibular 3rd molars (wisdom teeth). Infection is common, and an abscess or cellulitis may develop. Pericoronitis often recurs as food gets trapped beneath the flap and may be exacerbated by trauma from an opposing maxillary 3rd molar. The gingival flap disappears when the tooth is fully erupted. Many wisdom teeth do not erupt and are termed impacted.

During menopause, a desquamative gingivitis may occur. It is characterized by deep red, painful gingival tissue that bleeds easily. Vesicles may precede desquamation. The gingivae are soft because the keratinized cells that resist abrasion by food particles are absent. A similar gingival lesion may be associated with pemphigus vulgaris, bullous pemphigoid, benign mucous membrane pemphigoid, or atrophic lichen planus.

During pregnancy, swelling, especially of the interdental papillae, is likely to occur. Soft, reddish pedunculated gingival growths often arise in the interdental papillae during the 1st trimester, may persist throughout pregnancy, and may or may not subside after delivery. Such growths are pyogenic granulomas that are sometimes referred to as pregnancy tumors. They develop rapidly and then remain static. An underlying irritant is common, such as calculus or a restoration with a rough margin. These growths also may occur in nonpregnant women and men.

In leukemia, the gingivae may become engorged with a leukemic infiltrate, exhibiting clinical symptoms of edema, pain, and easily induced bleeding.

In scurvy, the gingivae are inflamed, hyperplastic, and engorged, bleeding easily. Petechiae and ecchymoses may appear throughout the mouth.

In pellagra, the gingivae are inflamed, bleed easily, and are susceptible to secondary infection. Additionally, the lips are reddened and cracked, the mouth feels scalded, the tongue is smooth and bright red, and the tongue and mucosa may have ulcerations.

Finding erythematous, friable tissue at the gum lines confirms the diagnosis of gingivitis. To detect early gingival disease, some dentists frequently measure the depth of the pocket around each tooth. Depths < 3 mm are normal; deeper pockets are at high risk of gingivitis and periodontitis.

Simple gingivitis is controlled by proper oral hygiene with or without an antibacterial mouth rinse. Thorough scaling (professional cleaning with hand or ultrasonic instruments) should be done. If appropriate, poorly contoured restorations are reshaped or replaced and local irritants are removed. Excess gingiva, if present, can be excised. Drugs causing gingival hyperplasia should be stopped if possible; if not, improved home care and more frequent professional cleanings (at least every 3 months) usually reduce the hyperplasia. Pregnancy tumors are excised.

If severe infection develops, antibiotics may be given for a day before extraction and continued during healing. A common regimen is amoxicillin 500 mg orally every 6 hours for 10 days (or until 3 days after all inflammation has subsided). Abscesses associated with pericoronitis require localized incision and drainage, a periodontal flap and root debridement, or extraction.

In gingivitis caused by systemic disorders, treatment is directed at the cause. In desquamative gingivitis during menopause, sequential administration of estrogens and progestins may be beneficial, but adverse effects of this therapy (see Hormone Therapy Hormone Therapy Menopause is physiologic or iatrogenic cessation of menses (amenorrhea) due to decreased ovarian function. Manifestations may include hot flushes, night sweats, sleep disruption, and genitourinary... read more ) limit recommendations for its use. Otherwise, dentists may prescribe a corticosteroid rinse or a corticosteroid paste that is applied directly to the gums. Gingivitis caused by pemphigus vulgaris Pemphigus Vulgaris Pemphigus vulgaris is an uncommon, potentially fatal, autoimmune disorder characterized by intraepidermal blisters and extensive erosions on apparently healthy skin and mucous membranes. Diagnosis... read more

Daily removal of plaque with dental floss and a toothbrush and routine cleaning by a dentist or hygienist at 6-month to 1-year intervals can help minimize gingivitis. Patients with systemic disorders predisposing to gingivitis require more frequent professional cleanings (from every 2 weeks to every 3 months).