The presence of reflux implies lower esophageal sphincter (LES) incompetence, which may result from a generalized loss of intrinsic sphincter tone or from recurrent inappropriate transient relaxations (ie, unrelated to swallowing). Transient LES relaxations are triggered by gastric distention or subthreshold pharyngeal stimulation.

Factors that contribute to the competence of the gastroesophageal junction include the angle of the cardioesophageal junction, the action of the diaphragm, and gravity (ie, an upright position) and the patient's age. Factors that may contribute to reflux include weight gain, fatty foods, caffeinated or carbonated beverages, alcohol, tobacco smoking, and drugs. Drugs that lower LES pressure include anticholinergics, antihistamines, tricyclic antidepressants, calcium channel blockers, progesterone, and nitrates. 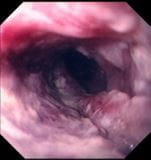 . Factors that contribute to the development of esophagitis include the caustic nature of the refluxate, the inability to clear the refluxate from the esophagus, the volume of gastric contents, and local mucosal protective functions. Some patients, particularly infants, may aspirate the reflux material; however, the cause of pulmonary aspiration is rarely GERD.

Symptoms and Signs of GERD

The most prominent symptom of GERD is heartburn, with or without regurgitation of gastric contents into the mouth. Infants present with vomiting, irritability, anorexia, and sometimes symptoms of chronic aspiration. Both adults and infants with chronic aspiration may have cough, hoarseness, or wheezing.

Esophagitis may cause odynophagia and even esophageal hemorrhage, which is usually occult but can be massive. Peptic strictures cause a gradually progressive dysphagia for solid foods. Peptic esophageal ulcers cause the same type of pain as gastric or duodenal ulcers, but the pain is usually localized to the xiphoid or high substernal region. Peptic esophageal ulcers heal slowly, tend to recur, and usually leave a stricture on healing.

(See also the American College of Gastroenterology’s 2013 guidelines for the diagnosis and treatment of gastroesophageal reflux disease.)

A detailed history points to the diagnosis. Patients with typical symptoms of GERD may be given a trial of acid-suppressing therapy. Patients who do not improve, or have long-standing symptoms or symptoms of complications, should undergo further testing.

Endoscopy, with cytologic washings and/or biopsy of abnormal areas, is the test of choice. Endoscopic biopsy is the only test that consistently detects the columnar mucosal changes of Barrett esophagus. Patients with unremarkable endoscopy findings who have typical symptoms despite treatment with proton pump inhibitors should undergo advanced pH testing Ambulatory pH Monitoring Ambulatory 24-hour esophageal pH monitoring with or without intraluminal impedance testing is currently the most common test for quantifying gastroesophageal reflux ( 1). The principal indications... read more . Although barium swallow readily shows esophageal ulcers and peptic strictures, it is less useful for mild to moderate reflux; in addition, most patients with abnormalities require subsequent endoscopy. Endoscopic findings can be used to grade the severity of reflux esophagitis (1 Diagnosis references Incompetence of the lower esophageal sphincter allows reflux of gastric contents into the esophagus, causing burning pain. Prolonged reflux may lead to esophagitis, stricture, and rarely metaplasia... read more

). Esophageal manometry Esophageal manometry Manometry is measurement of pressure within various parts of the gastrointestinal tract. It is done by passing a catheter containing solid-state or liquid-filled pressure transducers through... read more is used to evaluate esophageal peristalsis before surgical treatment.

Weight loss is recommended for overweight patients and those who have gained weight recently.

Drug therapy is often with a proton pump inhibitor; some are more potent than others, but all have been shown to be effective. For example, adults can be given oral omeprazole 20 mg, lansoprazole 30 mg, pantoprazole 40 mg, or esomeprazole 40 mg 30 minutes before a meal (eg, before breakfast, or for twice daily dosing, before breakfast and dinner). In some cases (eg, only partial response to once-a-day dosing), proton pump inhibitors may be given twice daily before meals. Infants and children may be given these drugs at an appropriate lower single daily dose (ie, omeprazole 20 mg in children > 3 years, 10 mg in children < 3 years; lansoprazole 15 mg in children ≤ 30 kg, 30 mg in children > 30 kg). These drugs may be continued long-term, but the dose should be adjusted to the minimum required to prevent symptoms, including intermittent or as-needed dosing. H2 blockers are also an effective treatment option for mildly symptomatic GERD. Potassium-competitive acid blockers (eg, vonoprazan) are an emerging therapy available in certain countries but not in the US. Promotility agents (eg, metoclopramide 10 mg orally 30 minutes before meals and at bedtime) are less effective but may be added to a proton pump inhibitor regimen.