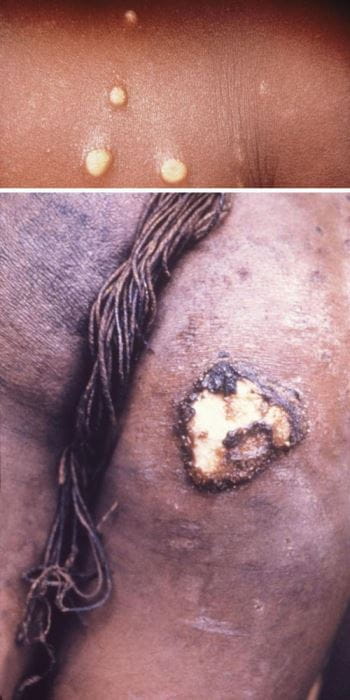 For bejel, pinta, and yaws, the causative agents are

Transmission is by close skin contact—sexual or not—primarily between children living in conditions of poor hygiene.

Yaws (frambesia) is the most prevalent of the endemic treponematoses and occurs in humid equatorial countries. Transmission requires direct skin contact and is favored by skin trauma.

Pinta, which is more limited in geographical distribution, occurs among the natives of Mexico, Central America, and South America and is not very contagious. Transmission probably requires contact with broken skin.

Unlike T. pallidum subspecies pallidum, other human treponemal subspecies are not transmitted via blood or transplacentally.

Symptoms and Signs of Bejel, Pinta, and Yaws

Bejel begins in childhood as a mucous patch (usually on the buccal mucosa), which may go unnoticed, or as stomatitis at the angles of the lips. These painless lesions may resolve spontaneously but are usually followed by papulosquamous and erosive papular lesions of the trunk and extremities that are similar to yaws. Periostitis of the leg bones is common. Later, gummatous lesions of the nose and soft palate develop.

Yaws, after an incubation period of several weeks, begins at the site of inoculation as a red papule that enlarges, erodes, and ulcerates (primary yaws). The surface resembles a strawberry, and the exudate is rich in spirochetes. Local lymph nodes may be enlarged and tender. The lesion heals but is followed after months to a year by successive generalized eruptions that resemble the primary lesion (secondary yaws). These lesions often develop in moist areas of the axillae, skinfolds, and mucosal surfaces; they heal slowly and may recur. Keratotic lesions may develop on the palms and soles, causing painful ulcerations (crab yaws). Five to 10 years later, destructive lesions (tertiary yaws) may develop; they include the following:

Pinta lesions are confined to the dermis. They begin at the inoculation site as a small papule that enlarges and becomes hyperkeratotic; they develop mainly on the extremities, face, and neck. After 3 to 9 months, further thickened and flat lesions (pintids) appear all over the body and over bony prominences. Still later, some lesions become slate blue or depigmented, resembling vitiligo. Pinta lesions typically persist if not treated.

Diagnosis of Bejel, Pinta, and Yaws

Diagnosis of endemic treponematoses is based on the typical appearance of lesions in people from endemic areas.

Treatment of Bejel, Pinta, and Yaws

Overview of Delirium and Dementia

Overview of Head and Neck Tumors

Overview of Rickettsial and Related Infections
Test your knowledge