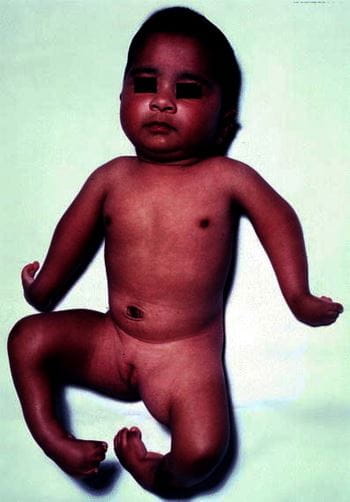 Arthrogryposis Multiplex Congenita
Arthrogryposis multiplex congenita refers to a variety of conditions that involve congenital limitation of joint movement. Intelligence is typically normal except when the arthrogryposis is caused by a disorder or syndrome that also affects intelligence. Diagnosis is clinical. Treatment includes joint manipulation and casting and sometimes surgery.

Arthrogryposis is not a specific diagnosis but rather a clinical finding of congenital contractures; these may be present in > 300 different disorders. Prevalence varies in different studies between about 1/3,000 to 1/12,000 live births. The perinatal mortality for some of the underlying conditions is as high as 32%, so establishing a specific diagnosis is important for prognosis and genetic counseling.

There are two major types of arthrogryposis multiplex congenita (AMC):

Any condition that impairs in utero movement for > 3 weeks can result in AMC. Causes may involve

) have been linked to AMC.

Deformities are prominent at birth. AMC is not progressive; however, the condition that causes it (eg, muscular dystrophy) may be. Affected joints are contracted in flexion or extension. In the classic manifestations of AMC, shoulders are sloped, adducted, and internally rotated, the elbows are extended, and the wrists and digits are flexed. Hips may be dislocated and are usually slightly flexed. Knees are extended; feet are often in the equinovarus position. Leg muscles are usually hypoplastic, and limbs tend to be tubular and featureless. Soft-tissue webbing sometimes occurs over ventral aspects of the flexed joints. The spine may be scoliotic. Except for slenderness of the long bones, the skeleton appears normal on x-rays. Physical disabilities may be severe. As noted, some children may have primary central nervous system dysfunction, but intelligence is usually unimpaired.

Endotracheal intubation during surgery may be difficult because children have small immobile jaws. Other abnormalities that rarely accompany arthrogryposis include microcephaly, cleft palate, cryptorchidism, and cardiac and urinary tract abnormalities; these findings raise suspicion for an underlying chromosomal defect or genetic syndrome.

If a newborn has multiple contractures, the initial evaluation should determine whether the condition is amyoplasia, distal arthrogryposis, or another syndrome where multiple contractures are associated with unrelated congenital anomalies and/or metabolic disorders. When available, a clinical geneticist should coordinate the assessment and management; typically, practitioners from many specialties are involved. A syndromic form of AMC is suspected when developmental delays and/or other congenital anomalies are present, and such patients should be evaluated for central nervous system disorders and monitored for progressive neurologic symptoms.

Evaluation should also include a thorough assessment for associated physical, chromosomal, and genetic abnormalities. Specific disorders to be sought include Freeman-Sheldon syndrome, Holt-Oram syndrome, Larsen syndrome, Miller syndrome, multiple pterygium syndrome, and DiGeorge syndrome (22q11 deletion syndrome). Testing typically starts with a chromosomal microarray analysis followed by specific gene tests that are done individually or as a standard panel by many genetic laboratories (1 Diagnosis references Arthrogryposis multiplex congenita refers to a variety of conditions that involve congenital limitation of joint movement. Intelligence is typically normal except when the arthrogryposis is... read more

Whole exome sequencing should be considered when other tests do not yield a definitive diagnosis, especially in familial cases (2 Diagnosis references Arthrogryposis multiplex congenita refers to a variety of conditions that involve congenital limitation of joint movement. Intelligence is typically normal except when the arthrogryposis is... read more

Early orthopedic and physical therapy evaluations are indicated. Joint manipulation and casting during the first few months of life may produce considerable improvement. Orthotics may help. Surgery may be needed later to align the angle of ankylosis, but mobility is rarely enhanced. Muscle transfers (eg, surgically moving the triceps so that it can flex the elbow) may improve function. Many children do remarkably well; two thirds are ambulatory after treatment.