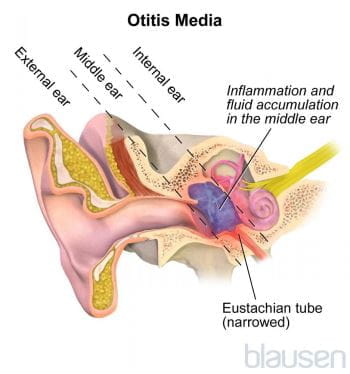 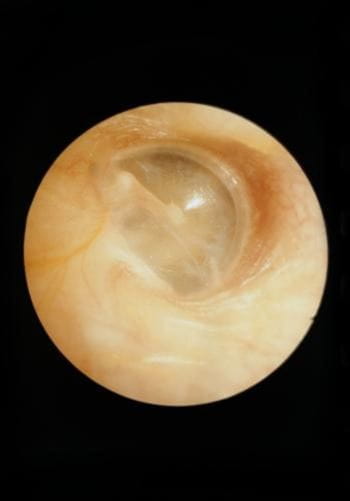 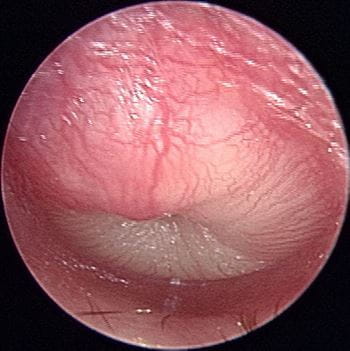 Ear Tubes
Acute otitis media is a bacterial or viral infection of the middle ear.

Acute otitis media (AOM) results from infection by viruses or bacteria, often as a complication of the common cold or of allergies. Although acute otitis media can occur at any age, it is most common between the ages of 3 months and 3 years. Acute otitis media often occurs during this age range because structures in the middle ear, such as the eustachian tube The Eustachian Tube: Keeping Air Pressure Equal Barotrauma is an injury caused by increased air pressure, such as during airplane flights or scuba diving. Barotrauma can cause ear pain or damage to the eardrum. The eardrum separates the ear... read more , are immature and not functioning properly. Symptoms and treatment are similar in adults and older children (for acute otitis media in younger children, see Acute Middle Ear Infection in Children Acute Middle Ear Infection in Children Acute middle ear infection is a bacterial or viral infection of the middle ear, usually accompanying a cold. Bacteria and viruses can infect the middle ear. Children with ear infections may... read more ).

Rarely, bacterial otitis media spreads to nearby structures such as the mastoid bone behind the ear (mastoiditis Mastoiditis Mastoiditis is a bacterial infection in the mastoid process, which is the prominent bone behind the ear. Mastoiditis usually occurs when untreated or inadequately treated acute otitis media... read more ) or the inner ear. Spread into the brain is extremely rare, but some people develop meningitis Acute Bacterial Meningitis Acute bacterial meningitis is rapidly developing inflammation of the layers of tissue that cover the brain and spinal cord (meninges) and of the fluid-filled space between the meninges (subarachnoid... read more or a collection of pus (abscess Abscess of the Brain A brain abscess is a pocket of pus in the brain. An abscess may form in the brain when bacteria from an infection elsewhere in the head or in the bloodstream or from a wound enter the brain... read more ) in or around the brain.

In people with acute otitis media, the infected ear is painful (see Earache Earache Earache usually occurs in only one ear. Some people also have ear discharge or, rarely, hearing loss. Ear pain may be due to a disorder within the ear itself or a disorder in a nearby body part... read more ), with a red, bulging eardrum. Many people have hearing loss. Infants may simply be cranky or have difficulty sleeping. Fever, nausea, vomiting, and diarrhea often occur in young children. The bulging eardrum sometimes ruptures, causing pus to drain from the ear.

If the infection spreads, people may have a severe headache, confusion, or impaired brain function.

Doctors use an otoscope to examine the ear canal and eardrum. This examination shows pus is present in the middle ear behind the eardrum.

The risk of acute otitis media can be reduced by routine childhood vaccinations Childhood Vaccination Schedule Most doctors follow the vaccination schedule recommended by the Centers for Disease Control and Prevention (CDC—see the schedule for infants and children and the schedule for older children... read more against pneumococci (with pneumococcal conjugate vaccine), Haemophilus influenzae type B (HiB), and influenza (flu). Infants should not sleep with a bottle because this makes it easy for liquid to run through the eustachian tube into the middle ear. Secondhand smoke may increase the risk, so people should not smoke, especially in the house or around children.

Recurrent acute otitis media may be prevented by the insertion of drainage tubes (tympanostomy tubes).

Most people with acute otitis media get better without treatment. However, because it is hard to predict whose symptoms will not lessen, some doctors treat all people with antibiotics, such as amoxicillin. Other doctors may give antibiotics only if the illness is severe or if symptoms do not lessen after 72 hours. Some experts say that older children or children aged 6 to 23 months who have acute otitis media in only one ear and that is not severe can start treatment with or without antibiotics. If antibiotics are withheld, they are given if the child is worse or does not feel better by the time 48 to 72 hours have passed since symptoms began. Pain relief is important. Acetaminophen or nonsteroidal anti-inflammatory drugs (NSAIDs), such as ibuprofen, can relieve pain. Adults may be given decongestant nasal sprays containing phenylephrine or decongestants taken by mouth such as pseudoephedrine. Antihistamines are useful for people who have allergies but not for those with colds. Decongestants and antihistamines are not helpful for children and may cause bothersome and possibly dangerous side effects, particularly in children younger than 2 years.

If a person has severe or persistent pain and fever, and the eardrum is bulging, a doctor may perform a myringotomy, in which an opening is made through the eardrum to allow fluid to drain from the middle ear. The opening, which does not affect hearing, usually heals without treatment. People who have repeated bouts of otitis media may need to have drainage tubes (tympanostomy tubes) placed in their eardrums (see figure Myringotomy Myringotomy: Treating Recurring Ear Infections Acute otitis media is a bacterial or viral infection of the middle ear. Acute otitis media often occurs in people with a cold or allergies. The infected ear is painful. Doctors examine the eardrum... read more 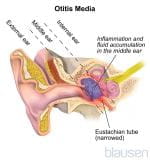