Drugs for Preventing and Treating Asthma

, DO, Wake Forest School of Medicine 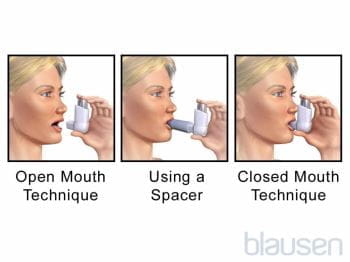 Nebulizer With a Mouthpiece

How to Use a Metered-Dose Inhaler

Drugs allow most people with asthma to lead relatively normal lives. Most of the drugs used to treat an asthma attack can be used (often in lower doses) to prevent attacks. (See also Asthma Asthma Asthma is a condition in which the airways narrow—usually reversibly—in response to certain stimuli. Coughing, wheezing, and shortness of breath that occur in response to specific triggers are... read more

Therapy is based on two classes of drugs:

Bronchodilators help to relax and widen (dilate) the airways. Bronchodilators include beta-adrenergic drugs (both those for quick relief of symptoms and those for long-term control), anticholinergics, and methylxanthines.

Quick medical attention should be sought when a person who has asthma feels the need to use more of a beta-adrenergic drug than is recommended. The need for extra use, particularly continuous use, indicates worsening bronchoconstriction, which can be dangerous, possibly risking even respiratory failure and death.

Ultra–long-acting beta-adrenergic drugs are effective for up to 24 hours, so people need only one dose per day.

Ultra–long-acting beta-adrenergic drugs are also not used alone because they may cause the same increase in the risk of death as long-acting drugs. Thus, doctors always give them together with inhaled corticosteroids.

Metered-dose inhalers (handheld cartridges containing gas under pressure) are the most commonly used method for giving inhaled beta-adrenergic drugs. The pressure turns the drug into a fine spray containing a measured dose of drug. Inhalation deposits the drug directly in the airways, so that it acts quickly, but the drug may not reach airways that are severely narrowed. For people who have difficulty using a metered-dose inhaler, spacers or holding chambers can be used. These devices increase the amount of drug delivered to the lungs. With any type of inhaler, proper technique is vital. If the device is not used properly, the drug will not reach the airways.

A dry powder drug formulation is also available for many bronchodilators. The powder formulation is easier for some people to use, in part because it requires less coordination with breathing than when using a metered-dose inhaler.

How to Use a Metered-Dose Inhaler

A nebulizer can be used to deliver beta-adrenergic drugs directly to the lungs. A nebulizer uses pressurized air or ultrasonic sound waves to create a continuous mist of drug that is inhaled without having to coordinate dosing with breathing. Nebulizers are often portable, and some units can even be plugged into a power outlet in a car. Nebulizers and metered-dose inhalers often deliver different amounts of drug with a single dose, but both are capable of delivering sufficient amounts of drug to the lungs. Nebulizer therapy is less likely to reach the more distant airways in people who are breathing comfortably and not taking deep breaths, making nebulized therapy less effective than a correctly used metered-dose inhaler or a dry powder formulation.

Other bronchodilators, including the anticholinergic drug ipratropium delivered through a nebulizer, may be combined with beta-adrenergic drugs for acute attacks. A combination of ipratropium plus albuterol given in a metered-dose inhaler is also available.

Other forms of beta-adrenergic drugs are also available. Beta-adrenergic drugs can be taken in liquid or tablet form or injected. However, the oral drugs tend to work more slowly than the inhaled or injected ones and are more likely to cause side effects so doctors use them less often. Side effects include abnormal heart rhythms Overview of Abnormal Heart Rhythms Abnormal heart rhythms (arrhythmias) are sequences of heartbeats that are irregular, too fast, too slow, or conducted via an abnormal electrical pathway through the heart. Heart disorders are... read more

, which may suggest excessive use.

Anticholinergic drugs, such as ipratropium and tiotropium, block acetylcholine from causing smooth muscle contraction and from producing excess mucus in the bronchi. These drugs are inhaled. These drugs further widen (dilate) the airways in people who have already been given beta-adrenergic drugs or an inhaled corticosteroid.

Leukotriene modifiers, such as montelukast, zafirlukast, and zileuton, also help control asthma. They are anti-inflammatory drugs that prevent the action or synthesis of leukotrienes. Leukotrienes are chemicals made by the body that cause bronchoconstriction. These drugs, which are taken by mouth, are used more to prevent asthma attacks than to treat them.

Mast cell stabilizers, which are inhaled, include cromolyn and nedocromil. These drugs are thought to inhibit the release of inflammatory chemicals from mast cells and make the airways less likely to narrow. Thus, they are also anti-inflammatory drugs. They are useful for preventing but not treating an attack. Mast cell stabilizers may be helpful for children who have asthma and for people who develop asthma due to exercise. These drugs are very safe and must be taken regularly even when a person is free of symptoms.

Corticosteroids block the body’s inflammatory response and are exceptionally effective at reducing asthma symptoms. They are the most potent form of anti-inflammatory drugs and have been an important part of asthma treatment for decades.

Corticosteroids can be taken in several different forms. Often, inhaled versions are best because they deliver the drug directly to the airways and minimize the amount sent throughout the body. The inhaled form is used to prevent attacks and improve lung function. Inhaled corticosteroids come in several strengths and are generally used twice a day. People should rinse their mouth after use to decrease the likelihood that a fungal infection of the mouth (thrush Symptoms Candidiasis is infection with the yeast Candida. Candidiasis tends to occur in moist areas of the skin. Candidiasis may cause rashes, scaling, itching, and swelling. Doctors examine the affected... read more

If taken for long periods, corticosteroids gradually reduce the likelihood of an asthma attack by making the airways less sensitive to a number of provocative stimuli. Long-term use of corticosteroids, especially larger doses taken by mouth, can cause side effects including obesity, osteoporosis, cataracts, easy bruising, skin thinning, insomnia, elevated blood glucose levels, and, very rarely, psychosis. Some studies have suggested that growth may be delayed when children use corticosteroids for an extended period. However, most children who use inhaled corticosteroids eventually reach their predicted adult height.

Omalizumab is a drug that is an antibody directed against a group of other antibodies called immunoglobulin E (IgE). Omalizumab is used in people with asthma who also have severe allergies and high levels of IgE in their blood. Omalizumab prevents IgE from binding to mast cells and thus prevents the release of inflammatory chemicals that can narrow the airways. It can decrease requirements for oral corticosteroids and help relieve symptoms. The drug is injected subcutaneously every 2 to 4 weeks.

Benralizumab, dupilumab, mepolizumab and reslizumab are antibodies that target molecules that cause airway inflammation (interleukins). They are used in the treatment of people with severe asthma triggered by allergens. Mepolizumab reduces the number of asthma attacks, decreases asthma symptoms, and reduces the need for corticosteroids. Mepolizumab is injected subcutaneously every 4 weeks. Reslizumab reduces the number of asthma attacks and decreases asthma symptoms. It is given intravenously every 4 weeks. Benralizumab and dupilumab may be given in addition to other asthma drugs for people who have a lot of eosinophils (a type of white blood cell White Blood Cells The main components of blood include Plasma Red blood cells White blood cells Platelets read more 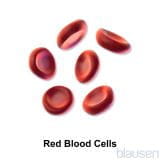 Theophylline, a methylxanthine, is another drug that causes bronchodilation. It is now used less frequently than in the past. Theophylline is usually taken by mouth. Oral theophylline comes in many forms, from short-acting tablets and syrups to longer-acting sustained release capsules and tablets. Theophylline is used mainly for prevention of asthma.

The amount of theophylline in the blood can be measured in a laboratory and must be closely monitored by a doctor. Too little drug in the blood may provide little benefit, and too much drug may cause life-threatening abnormal heart rhythms or seizures. When first taking theophylline, a person who has asthma may feel slightly jittery and may develop headaches. These side effects usually disappear as the body adjusts to the drug. Larger doses may cause a rapid heartbeat, nausea, or palpitations. A person may also experience insomnia, agitation, vomiting, and seizures. Occurrence of these side effects is one of the reasons that theophylline is used less often than other drugs.

Other Drugs Used to Prevent and Treat Asthma

Other drugs are occasionally used in asthma treatment. These drugs may be used in specific circumstances. Magnesium is often given by vein in the emergency department for acute attacks.

Other drugs that may be given for chronic asthma include lidocaine or heparin given with a nebulizer, colchicine, and intravenous immune globulin. Evidence supporting the use of any of these therapies is limited, so these drugs are used much less often.