Title: Sleep Bonus
Guest: Dr. Richard Schwab, Chief, Division of Sleep Medicine Professor of Medicine at the Hospital of the University of Pennsylvania

Joe McIntyre: Hello, and welcome back to the Merck Manuals Medical Myths podcast, where we set the record straight on today's most talked about medical topics and questions. I'm your host, Joe McIntyre. And on this bonus episode, we welcome back Dr. Richard Schwab. Again, Dr. Schwab is a professor of medicine at the University of Pennsylvania in Philadelphia, where he is the chief of the Division of Sleep Medicine. And on this episode, we're going to dive into the topic of dreaming: what they are, how they work, if they mean anything, and Dr. Schwab is going to tell us a little bit about that. Let’s start off with a bit of a basic question: what are dreams exactly, and why do we experience them?

Joe McIntyre: Does everybody dream? Or there's some people who either just don't dream or, on the other side, they just forget them? Do they dream but just forget that they actually had those dreams?

Joe McIntyre: So, it's not necessarily a good thing or a bad thing that someone can't remember their dreams? It really doesn't matter?

Dr. Richard Schwab: It doesn't. But if you are remembering your dreams and the change, then your sleep may be more fragmented. Why are you waking up to remember your dream? And sometimes that's related to sleep apnea. Sleep apnea is often worse in REM sleep, or dreaming sleep. So maybe your sleep is being fragmented in REM sleep because of sleep apnea. But if you wake up enough, you're going to remember your dreams. But if you don't wake up right out of REM, you're not going to remember it. So, it doesn't really matter. Although I do worry a little bit when someone changes and they think, “Well, I never remember my dreams and now I do.” So, that can be, again, a sign that their sleep is fragmented in REM sleep and sleep apnea is the one thing that often does that.

Joe McIntyre: Okay, so I'm going to ask the question, you just be honest with me here. Do dreams actually mean anything? Are they a sign of something? Is there any meaning we can gather from dreams in general?

Dr. Richard Schwab: I don't know really the answer to that. I think the answer is probably not that they don't mean anything. They definitely are related to activities you do during the daytime, and they get moved into a dream in unusual ways. But I don't think they really mean much, but I'm not a psychologist, so I could be wrong about that.

Joe McIntyre: Okay, now let's get into the other side, the negative side of dreams, those nightmares or night terrors. And speaking of, are nightmares and night terrors the same thing? Do they exist in that same kind of sphere?

Dr. Richard Schwab: They are in the same sphere, but night terrors, typically, you're seeing in kids, and these children are horrified. They'll start screaming and they're hard to calm down. And you have this giant episode where a child just starts to scream out of nowhere. Whereas nightmares, we're all used to those. And that's more of an adult thing where people have a nightmare and depending on how scary they are, they can be a problem. And if they're recurrent, that's even more of a problem. It's sort of the same thing over and over again, and that can really disturb your sleep. But all of us have nightmares at some time.

Joe McIntyre: What about sleep paralysis? How is that different? What exactly is that?

Dr. Richard Schwab: So that's very different. That's a sign of narcolepsy, which is a condition where people are really sleepy, but sleep paralysis is when you wake up from sleep, but you're still paralyzed. And it can be a normal phenomenon. For instance, it happened to me once for a couple seconds. It's like, “Oh my god, I'm awake, but I can't move.” People with narcolepsy, it can last 30 seconds, and it can be super scary because you’re kind of in this dreamlike state, and you wake up and now you can't move. And sometimes it requires you just rolling a hair, and you move, and then it's okay, or somebody touches you and then you can move again. But it's pretty scary. And like I said, it can be a normal phenomenon, but it also can be a sign of narcolepsy.

Joe McIntyre: Are there certain foods that trigger dreams? Whether some foods just trigger you to dream in general? Or do some foods trigger nightmares versus positive dreams? Is there any connection between food and the dreams that we have?

Dr. Richard Schwab: Not that I know of. There may be, and it may be individually, but I have not read any studies talking about specific associations. If you have some type of food that causes reflux or heartburn, that might knock you out of dreaming, because you're just going to wake up. But for the most part, no, I don't think foods outside of, again, alcohol being a problem, trigger dreams.

Joe McIntyre: Now, on the opposite end of the spectrum of sleep paralysis, we have sleepwalking, a pretty serious health issue and something that can be quite dangerous. So, can you explain to our listeners what exactly sleepwalking is, and how or if it relates to dreaming at all?

Dr. Richard Schwab: So, it doesn't relate to dreaming. Sleepwalking is typically out of non-REM sleep. So, in the period of time when you're not dreaming. And there's usually a family history. You can get out of bed and maneuver around items, you can even turn a key into a door, you could start a car. You could never do a combination lock, but you can do gross motor things. And so, you have to protect the room. If you're a sleepwalker, you have to make sure that you can't open the window because if you can open the window on a third story, you won't know, you'll walk out that window and then fall. Or you put on door alarms so that the person who leaves the bedroom, you can figure it out. So sleepwalking is really about protecting the environment. But it is not during dreaming sleep, it's a non-REM sleep. Typically, episodes are short, 10 or 15 minutes, but can be longer. Now, there is something called REM behavior disorder, and that does occur during dreaming and is typically in older men. These are dreams that are typically aggressive and hostile. Sometimes, we've had patients who will hit their bed partner, and they think they're in a dream. And so, they're acting out that dream and they'll jump out of bed and act out that dream or they’ll put their hand to the backboard of a bed or the bed frame. So that's more aggressive. That's pretty uncommon. Sleepwalking is much more common and typically seen in kids or adolescents. And for most people, sleepwalking resolves as you become an adult.

Joe McIntyre: Let’s say you have a more serious issue with sleepwalking, are there methods that you use as a doctor who specializes in sleep, beyond those more physical components of protecting your room? Are there ways to kind of get out of it or stop sleepwalking?

Dr. Richard Schwab: There are, but they're usually benzodiazepines, which you're not going to want to give to an adolescent. So, I've hardly ever given anybody medication for sleepwalking unless they really were going to injure themselves. It's much easier to protect the environment and it's not too hard to do that. For REM behavior disorder, that's a different story there. You do want to treat them because that's not the environment, you might still hurt somebody, because you're going to hit something. It's an aggressive dream, independent of protecting the environment.

Dr. Richard Schwab: Maybe. There's something called image therapy and we use it for people who have recurrent nightmares, or the same nightmare over and over again. So, you're falling off a cliff, you're falling into an ocean, it's this concept of falling. And so, what we tell people to do is, during the daytime, change the dream. So instead of you falling off a cliff, you're falling down on, you know, a rubber mat, or you're only falling three feet, or you just change it to a happy ending. If you do that enough, your brain seems to get the message, and then this image therapy can work. So, I do think there's some ways of correcting scary dreams or recurrent nightmares. To answer your question, though, specifically: could you dream about a specific topic? I think that happens mostly just during your daytime, these things will happen. But I don't know of any way of getting you to dream about a specific car or specific baseball team or football team. I think that's harder.

Joe McIntyre: Yeah, so when people tell me that the Phillies will only win the World Series again in my dreams, so that might not even be the case, unfortunately.

Joe McIntyre: All right. Well, Dr. Schwab, I want to thank you again for joining us on this episode. It's been a super fantastic conversation. And for those listeners who are listening here, if you haven't caught our previous conversation with Dr. Schwab about sleep health, please listen to that. He shared a number of interesting topics. And we dove into a ton of wild myths when it comes to sleep. So, I'll leave our listeners with something we always say at the end of every episode here at the Merck Manuals.

Dr. Richard Schwab: Medical knowledge is power. Pass it on.

Joe McIntyre: Thanks so much. 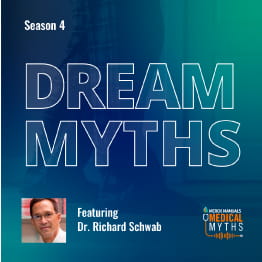