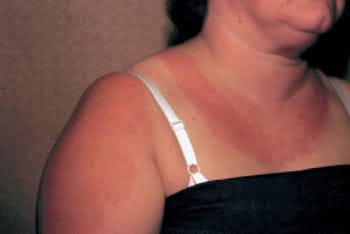 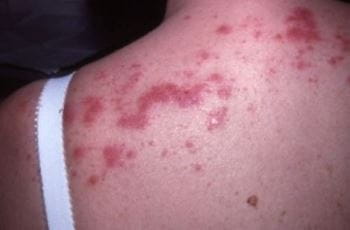 Some Drugs and Substances That Sensitize the Skin to Sunlight
Photosensitivity, sometimes referred to as a sun allergy, is an immune system reaction that is triggered by sunlight.

and some porphyrias Overview of Porphyrias Porphyrias are a group of disorders caused by deficiencies of enzymes involved in the production of heme. Heme is a chemical compound that contains iron and gives blood its red color. Heme is... read more , also may cause more serious skin reactions to sunlight.

Hives Hives Hives are red, itchy, slightly elevated swellings. The swelling is caused by the release of chemicals (such as histamine) from mast cells in the skin, which cause fluid to leak out of small... read more

(large, itchy red bumps or welts) that develop after only a few minutes of exposure to sunlight are called solar urticaria. The hives typically last for minutes or hours. A person can be prone to developing solar urticaria for a very long time, sometimes indefinitely. People with large affected areas sometimes have headaches and wheezing and feel dizzy, weak, and nauseated.

). There are two types of chemical photosensitivity: phototoxicity and photoallergy.

In phototoxicity, people have pain and develop redness, inflammation, and sometimes brown or blue-gray discoloration in areas of skin that have been exposed to sunlight for a brief period. These symptoms resemble those of sunburn, but the reaction differs from sunburn in that it occurs only after the person has swallowed certain drugs (such as tetracyclines or diuretics) or chemical compounds or has applied them to the skin (such as perfume and coal tar). Some plants (including limes, celery, and parsley) contain compounds called furocoumarins that make some people's skin more sensitive to the effects of UV light. This reaction is called phytophotodermatitis. All phototoxic reactions appear only on areas of skin that have been exposed to the sun. They usually develop within hours after sun exposure.

In photoallergy, an allergic reaction causes redness, scaling, itching, and sometimes blisters and spots that resemble hives. This type of reaction can be caused by aftershave lotions, sunscreens, and sulfonamides. Substances that cause photoallergy are capable of doing so only after the person has been exposed to both the substance and sunlight (because sunlight is what makes the substance capable of triggering photoallergy). Photoallergic reactions can also affect areas of skin that have not been exposed to the sun. They usually develop 24 to 72 hours after sun exposure.

Some Drugs and Substances That Sensitize the Skin to Sunlight

This eruption is a reaction to sunlight (primarily UVA light) that is not fully understood. It is one of the most common sun-related skin problems and is most common among women and among people from northern climates who are not regularly exposed to the sun.

The eruption appears as multiple red bumps and irregular, red, raised areas (called plaques) and, rarely, as blisters on sun-exposed skin. These plaques, which are itchy, typically appear 30 minutes to several hours after sun exposure. However, new patches may develop many hours or several days later.

The eruption usually goes away within several days to weeks. Typically, people with this condition who continue to go out in the sun gradually become less sensitive to the effects of sunlight (a process known as hardening).

There are no specific tests for photosensitivity reactions. A doctor suspects a photosensitivity reaction when a rash appears only in areas exposed to sunlight. A close review of the person's medical history, skin symptoms, any diseases, drugs taken by mouth, or substances applied to the skin (such as drugs or cosmetics) may help a doctor pinpoint the type and cause of the photosensitivity reaction. Doctors may do tests to rule out diseases that are known to make some people susceptible to such reactions (such as systemic lupus erythematosus Systemic Lupus Erythematosus (SLE) Systemic lupus erythematosus is a chronic autoimmune inflammatory connective tissue disorder that can involve joints, kidneys, skin, mucous membranes, and blood vessel walls. Problems in the... read more

When a rash occurs on an area of skin that has been exposed to the sun and the diagnosis is not clear, doctors may do skin patch tests and reaction reproduction tests that involve exposure to UV light (phototesting) when the person is not using any drugs that cause photosensitivity reactions. These tests may help clarify which type of photosensitivity reaction may be the cause.

All people should avoid excessive sun exposure, but people who are sensitive to sunlight due to any cause should be especially careful and wear protective clothes, avoid sunlight as much as possible, and use sunscreens regularly (see prevention of sunburn Prevention Sunburn results from a brief (acute) overexposure to ultraviolet (UV) light. Overexposure to ultraviolet light causes sunburn. Sunburn causes painful reddened skin and sometimes blisters, fever... read more

If possible, any drugs or chemicals that could cause photosensitivity should be discontinued after consulting with a doctor. To treat chemical photosensitivity reactions, corticosteroids are applied to the skin and the substance that is causing the reaction is avoided.

Solar urticaria can be difficult to treat, but doctors may try histamine (H1) blockers (antihistamines), corticosteroids applied to the skin, or sunscreens. If these treatments do not work, ultraviolet (UV) light therapy may be tried. Some people may be helped by omalizumab, which is a drug that may help decrease allergic responses in the body.

(lupus) may benefit from corticosteroids applied to the skin or hydroxychloroquine or corticosteroids taken by mouth. Occasionally, people with polymorphous light eruption can be desensitized to the effects of sunlight by gradually increasing their exposure to UV light (see Phototherapy Phototherapy Psoriasis is a chronic, recurring disease that causes one or more raised, red patches that have silvery scales and a distinct border between the patch and normal skin. A problem with the immune... read more

Taking Polypodium leucotomos (a dietary supplement made from certain tropical ferns) or nicotinamide (a form of vitamin B3) by mouth may be helpful in preventing symptoms in people susceptible to photosensitivity caused by sun exposure.