Cross section of a canine tooth 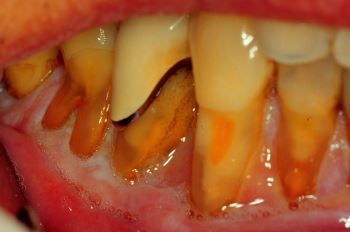 Each tooth has a crown and a root. The canines have the largest and strongest roots. An inner pulp contains blood vessels, lymphatics, and nerves, surrounded by the hard but porous dentin, which is sensitive to touch and to temperature changes. A very hard enamel coating covers the crown. The bonelike cementum is over the root, which, when healthy, is covered by gingiva (see figure Cross section of a canine tooth Cross section of a canine tooth The teeth are categorized as incisors, canines, premolars, and molars and conventionally are numbered beginning with the maxillary right 3rd molar (see figure Identifying the teeth). Each tooth... read more

Twenty deciduous teeth normally begin appearing at close to age 6 months and should all be in place by age 30 months (see table Tooth Eruption Times Tooth Eruption Times Physical growth includes attainment of full height and appropriate weight and an increase in size of all organs (except lymphatic tissue, which decreases in size). Growth from birth to adolescence... read more ). These teeth are followed by 32 permanent teeth that begin to appear by about age 6 years. The period from age 6 to 11 is called the mixed dentition stage, in which both deciduous and permanent teeth are present. Timing of tooth eruption is one indicator of skeletal age and may identify growth retardation or establish age for forensic purposes.

Cross section of a canine tooth

The gingiva surrounds the teeth at the base of their crown. The alveolar ridges are trabecular bone containing sockets for the teeth. The periodontium consists of the tissues that support the teeth—the gingiva, epithelial attachment, connective tissue attachment, periodontal ligament, and alveolar bone. The mandible and maxilla support the alveolar ridges and house the teeth. Saliva from the salivary glands bathes and protects the teeth. The tongue directs food between the grinding surfaces and helps clean the teeth. The maxilla receives innervation from the maxillary nerve, the 2nd division of the trigeminal nerve (the 5th cranial nerve). The mandibular nerve, which is the 3rd and most inferior division of the trigeminal nerve, innervates the mandible.

In the older patient, or in some periodontal diseases, gingival recession exposes the dental root adjacent to the crown, making root caries Caries Caries is tooth decay, commonly called cavities. The symptoms—tender, painful teeth—appear late. Diagnosis is based on inspection, probing of the enamel surface with a fine metal instrument... read more

common. If tooth destruction results and the tooth must be removed, the mechanical stimulation necessary for maintaining bone integrity ceases. Consequently, atrophy of the alveolar ridge begins when teeth are absent.

Normally, keratinized epithelium occurs on the facial aspect of the lips, dorsum of the tongue, hard palate, and gingiva around the teeth. When healthy, the keratinized gingiva extends 5 to 7 mm from the crown of the tooth. Nonkeratinized mucosa occurs over alveolar bone farther from the teeth, inside the lips and cheeks, on the sides and undersurface of the tongue, on the soft palate, and covering the floor of the mouth. The skin and mucosa of the lips are demarcated by the vermilion border.

The buccal mucosa, including the vestibule and nonkeratinized alveolar mucosa, is usually smooth and moist. Innocuous entities in this region include linea alba (a thin white line, typically bilateral, on the level of the occlusal plane, where the cheek is bitten), Fordyce granules (aberrant sebaceous glands appearing as < 1 mm light yellow spots that also may occur on the lips), and white sponge nevus (bilateral thick white folds over most of the buccal mucosa). Occasionally, pigmentation of the mucosa may arise from foreign material that is incorporated into the tissue. Most commonly, this occurs as a blue or black area adjacent to a dental amalgam filling. This is known as an amalgam tattoo. The orifices of the parotid (Stensen) ducts are opposite the maxillary 1st molar on the inside of each cheek and should not be mistaken for an abnormality. Recognizing these avoids needless biopsy and apprehension.

The dorsal surface of the tongue is covered with numerous whitish elevations called the filiform papillae. Interspersed among them are isolated reddish prominences called the fungiform papillae, occurring mostly on the anterior part of the tongue. The circumvallate papillae, numbering 8 to 12, are considerably larger and lie posteriorly in a V pattern. The circumvallate papillae do not project from the tongue but instead are surrounded by a trench. The foliate papillae appear as a series of parallel, slit-like folds on the lateral borders of the tongue, near the anterior pillars of the fauces. They vary in length and can easily be confused with malignant lesions, as may the foramen cecum, median rhomboid glossitis, and, rarely, a lingual thyroid nodule. Lingual tonsils are components of the Waldeyer ring, are at the back of the tongue, and should not be mistaken for lesions. If an apparent abnormality is bilateral, it is almost always a normal variant.

The major salivary glands are the paired parotid, submandibular, and sublingual glands. Most oral mucosal surfaces contain many minor mucus-secreting salivary glands. Anteriorly and near the midline on each side of the floor of the mouth are the openings of the Wharton ducts, which drain the ipsilateral submandibular and sublingual glands. The parotid glands drain into the cheeks via the Stensen ducts.

Evaluation of the Dental Patient

Evaluation of the Dental Patient

Overview of Delirium and Dementia