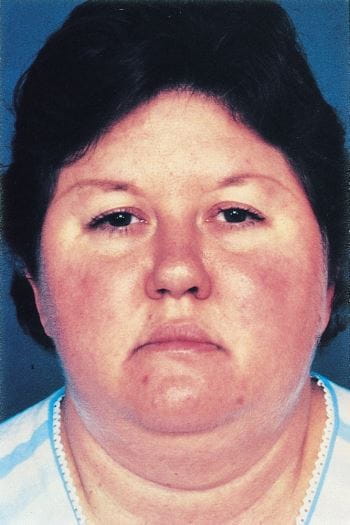 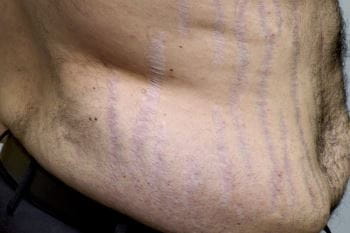 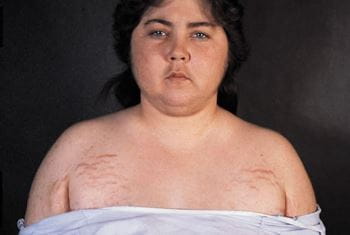 Diagnostic Tests in Cushing Syndrome
Cushing syndrome is a constellation of clinical abnormalities caused by chronic high blood levels of cortisol or related corticosteroids. Cushing disease is Cushing syndrome that results from excess pituitary production of adrenocorticotropic hormone (ACTH), generally secondary to a pituitary adenoma. Typical symptoms and signs include moon face and truncal obesity, easy bruising, and thin arms and legs. Diagnosis is by history of receiving corticosteroids or by finding elevated and/or relatively autonomous serum cortisol. Treatment depends on the cause.

Hyperfunction of the adrenal cortex can be adrenocorticotropic hormone (ACTH)-dependent or ACTH-independent.

ACTH-dependent hyperfunction may result from

Whereas the term Cushing syndrome denotes the clinical picture resulting from cortisol excess from any cause, Cushing disease refers to hyperfunction of the adrenal cortex from pituitary ACTH excess. Patients with Cushing disease usually have a small adenoma of the pituitary gland Pituitary Lesions Patients with hypothalamic-pituitary lesions generally present with some combination of Symptoms and signs of a mass lesion: headaches, altered appetite, thirst, visual field defects—particularly... read more .

Symptoms and Signs of Cushing Syndrome

Clinical manifestations of Cushing syndrome include

Muscle wasting and weakness are present. The skin is thin and atrophic, with poor wound healing and easy bruising. Purple striae may appear on the abdomen. Hypertension, renal calculi, osteoporosis, glucose intolerance, reduced resistance to infection, and mental disturbances are common. Cessation of linear growth is characteristic in children.

Females usually have menstrual irregularities. In females with adrenal tumors, increased production of androgens may lead to hirsutism, temporal balding, and other signs of virilism.

Diagnosis is usually suspected based on the characteristic symptoms and signs. Confirmation (and identification of the cause) generally requires hormonal and imaging tests.

In some centers, testing begins with a 24-hour measurement of urinary free cortisol, which is elevated > 120 mcg/24 hours (>331 nmol/24 hours) in almost all patients with Cushing syndrome. However, many patients with elevations of urinary free cortisol between 100 and 150 mcg/24 hours (276 and 414 nmol/24 hours) have obesity, depression, or polycystic ovaries but not Cushing syndrome. Normal ranges may vary according to assay.

A baseline morning (eg, 9 AM) serum cortisol measurement should also be done.

An alternative approach to investigation uses the dexamethasone suppression test, in which 1, 1.5, or 2 mg of dexamethasone is given orally at 11 to 12 PM and serum cortisol is measured at 8 to 9 AM the next morning. In most normal patients, this drug suppresses morning serum cortisol to < 1.8 mcg/dL (< 50 nmol/L), whereas patients with Cushing syndrome virtually always have a higher level. A more specific but equally sensitive test is to give dexamethasone 0.5 mg orally every 6 hours for 2 days (low dose). In general, a clear failure to suppress cortisol levels in response to low-dose dexamethasone establishes the diagnosis, unless there is reason to suspect abnormal dexamethasone absorption or metabolism.

If results of urinary free cortisol measurements and the dexamethasone suppression test are indeterminate, the patient is hospitalized for measurement of serum cortisol at midnight, which is more likely to be conclusive. Alternatively, salivary cortisol samples may be collected and stored in the refrigerator at home. Serum cortisol normally ranges from 5 to 25 mcg/dL (138 to 690 nmol/L) in the early morning (6 to 8 AM) and declines gradually to < 1.8 mcg/dL (< 50 nmol/L) at midnight. Patients with Cushing syndrome occasionally have a normal morning serum cortisol level but lack normal diurnal decline in cortisol production, such that the midnight serum cortisol levels are above normal and the total 24-hour cortisol production may be elevated.

Serum cortisol may be spuriously elevated in patients with congenital increases of corticosteroid-binding globulin or in those receiving estrogen therapy, but diurnal variation is normal in these patients.

ACTH levels are measured to determine the cause of Cushing syndrome. Undetectable levels, both basally and particularly in response to corticotropin-releasing hormone (CRH), suggest a primary adrenal cause. High levels suggest a pituitary cause or an ectopic source. If ACTH is detectable, provocative tests help differentiate Cushing disease from ectopic ACTH syndrome, which is rarer. In response to high-dose dexamethasone (2 mg orally every 6 hours for 48 hours), the 9 AM serum cortisol falls by > 50% in most patients with Cushing disease but infrequently in those with ectopic ACTH syndrome. Conversely, ACTH rises by > 50% and cortisol rises by 20% in response to human or ovine-sequence CRH (100 mcg IV or 1 mcg/kg IV) in most patients with Cushing disease but very rarely in those with ectopic ACTH syndrome (see table Diagnostic Tests in Cushing Syndrome Diagnostic Tests in Cushing Syndrome Cushing syndrome is a constellation of clinical abnormalities caused by chronic high blood levels of cortisol or related corticosteroids. Cushing disease is Cushing syndrome that results from... read more

An alternative approach to localization, which is more accurate but more invasive, is to catheterize both petrosal veins (which drain the pituitary) and measure ACTH from these veins 5 minutes after giving a 100 mcg or 1 mcg/kg bolus of CRH (human or ovine). A central-to-peripheral ACTH ratio > 3 virtually excludes ectopic ACTH syndrome, whereas a ratio < 3 suggests a need to seek such a source.

Pituitary imaging is done if ACTH levels and provocative tests suggest a pituitary cause; gadolinium-enhanced MRI is most accurate, but some microadenomas are visible on CT. If testing suggests a nonpituitary cause, imaging includes high-resolution CT of the chest, pancreas, and adrenals; scintiscanning or PET scanning with radiolabeled octreotide or, preferably, Gallium-68 dotatate and occasionally fluorodeoxyglucose (FDG)-PET scanning. Petrosal sinus sampling may be needed to differentiate pituitary from ectopic sources.

In children with Cushing disease, pituitary tumors are very small and usually cannot be detected with MRI. Petrosal sinus sampling is particularly useful in this situation. MRI is preferred to CT in pregnant women to avoid fetal exposure to radiation.

Initially, the patient’s general condition should be supported by high protein intake and appropriate administration of potassium. If clinical manifestations are severe, it may be reasonable to block corticosteroid secretion with metyrapone 250 mg to 1 g orally 3 times a day or ketoconazole 400 mg orally once a day, increasing to a maximum of 400 mg 3 times a day. Ketoconazole is probably slower in onset and sometimes hepatotoxic. Parenteral etomidate (an intravenous anesthetic that also blocks cortisol production) may be life-saving for patients with fulminant symptoms; it is given as an intravenous infusion: the starting dose is usually 1 to 2 mg/hour, increasing as necessary, with frequent assessments of cortisol levels and the dose titrated accordingly.

Pituitary tumors that produce excessive ACTH are removed surgically or extirpated with radiation therapy. If no tumor is shown on imaging but a pituitary source is likely, total hypophysectomy may be attempted, particularly in older patients. Younger patients may receive supervoltage irradiation of the pituitary, delivering 45 Gy (Gray). However, in children, irradiation may reduce secretion of growth hormone and occasionally cause precocious puberty. In special centers, heavy particle beam irradiation, providing about 100 Gy, is often successful, as is a single focused beam of radiation therapy given as a single dose (radiosurgery). Alternatively, proton beam therapy can be used if available. Response to irradiation occasionally requires several years, but response is more rapid in children.

Studies suggest that mild cases of persistent or recurrent disease may benefit from the somatostatin analog pasireotide. However, hyperglycemia is a significant adverse effect. The dopamine agonist cabergoline may also occasionally be useful. Alternatively, the corticosteroid receptors can be blocked with mifepristone. The glucose receptor antagonist mifepristone increases serum cortisol but blocks the effects of the corticosteroid and may cause hypokalemia.

Bilateral adrenalectomy is reserved for patients with pituitary hyperadrenocorticism who do not respond to both pituitary exploration (with possible adenomectomy) and irradiation, or in patients in whom surgery was unsuccessful and radiotherapy is contraindicated. Adrenalectomy requires life-long corticosteroid replacement.

Adrenocortical tumors are removed surgically. Patients must receive cortisol during the surgical and postoperative periods because their nontumorous adrenal cortex will be atrophic and suppressed. Benign adenomas can be removed laparoscopically. With multinodular adrenal hyperplasia, bilateral adrenalectomy may be necessary. Even after a presumed total adrenalectomy, functional regrowth occurs in a few patients.

Ectopic ACTH syndrome is treated by removing the nonpituitary tumor that is producing the ACTH. However, in some cases, the tumor is disseminated and cannot be excised. Adrenal enzyme inhibitors, such as metyrapone 500 mg orally 3 times a day (and up to a total of 6 g a day) or mitotane 0.5 g orally once a day, increasing to a maximum of 3 to 4 g a day, usually control severe metabolic disturbances (eg, hypokalemia Hypokalemia Hypokalemia is serum potassium concentration 3.5 mEq/L ( 3.5 mmol/L) caused by a deficit in total body potassium stores or abnormal movement of potassium into cells. The most common cause is... read more ). When mitotane is used, large doses of hydrocortisone or dexamethasone may be needed, sometimes making measurement of cortisol production unreliable. Severe hypercholesterolemia may also develop. Ketoconazole 400 to 1200 mg orally once a day also blocks corticosteroid synthesis, although it may cause liver toxicity and can cause addisonian symptoms. Mifepristone also may be useful for treating ectopic ACTH syndrome; however, because it blocks the action of cortisol but does not lower serum levels, monitoring its use can be problematic. In an emergency situation, parenteral etomidate can produce a rapid fall in serum cortisol, but its use requires careful monitoring.

Nelson syndrome occurs when the pituitary gland continues to expand after bilateral adrenalectomy, causing a marked increase in the secretion of ACTH and its precursors and resulting in severe hyperpigmentation. It occurs in ≤ 50% of patients who undergo adrenalectomy. The risk is probably reduced if the patient undergoes pituitary radiation therapy.

Although irradiation may arrest continued pituitary growth, many patients also require hypophysectomy. The indications for hypophysectomy are the same as for any pituitary tumor: an increase in size such that the tumor encroaches on surrounding structures, causing visual field defects, pressure on the hypothalamus, or other complications.

Routine irradiation is often done after hypophysectomy if it was not done previously, especially when a tumor is clearly present. Radiation therapy may be delayed if there is no obvious lesion. Radiosurgery, or focused radiation therapy, can be given in a single fraction when standard external beam radiation therapy has already been done, as long as the lesion is at a reasonable distance from the optic nerve and chiasm.