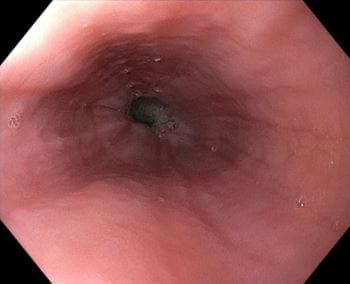 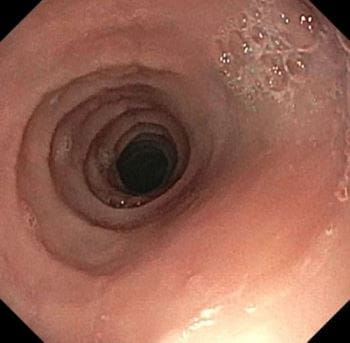 Rings and Strictures in Eosinophilic Esophagitis 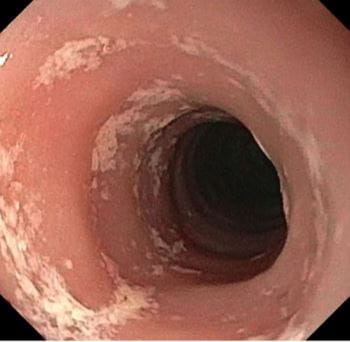 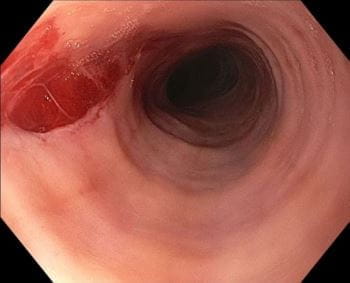 Postdilation Tear
Eosinophilic esophagitis is a chronic immune-mediated disease of the esophagus resulting in eosinophil-predominant inflammation of the esophagus; it can cause reflux-like symptoms, dysphagia, and food impaction. Diagnosis is by endoscopy with biopsy. Treatment includes proton pump inhibitors, topical corticosteroids, dietary changes, and sometimes esophageal dilation.

Eosinophilic esophagitis is an increasingly recognized disease that can begin at any time between infancy and young adulthood; it occasionally manifests in older adults. It is more common among males.

The cause of eosinophilic esophagitis is likely an immune response to dietary antigens in patients with genetic susceptibility; environmental allergens may also play a role. Untreated chronic esophageal inflammation ultimately can lead to esophageal narrowing and strictures Obstructive Disorders of the Esophagus Most esophageal obstruction develops slowly and is incomplete when patients first seek care, typically for difficulty swallowing solids. However, sometimes complete esophageal obstruction develops... read more .

In adults, esophageal food impaction is sometimes the first manifestation, and most patients have dysphagia Dysphagia Dysphagia is difficulty swallowing. The condition results from impeded transport of liquids, solids, or both from the pharynx to the stomach. Dysphagia should not be confused with globus sensation... read more . Symptoms of gastroesophageal reflux disease Gastroesophageal Reflux Disease (GERD) Incompetence of the lower esophageal sphincter allows reflux of gastric contents into the esophagus, causing burning pain. Prolonged reflux may lead to esophagitis, stricture, and rarely metaplasia... read more

(GERD), such as heartburn, may occur.

(See also the American College of Gastroenterology’s 2013 Evidenced Based Approach to the Diagnosis and Management of Esophageal Eosinophilia and Eosinophilic Esophagitis (EoE).)

The typical patient with eosinophilic esophagitis has dysphagia for solids and a history of atopy. The diagnosis of eosinophilic esophagitis is also considered when reflux symptoms fail to respond to acid-suppression therapy. It should also be considered in adults who present with esophageal food impaction or in adults who have noncardiac chest pain.

Diagnosis requires endoscopy with biopsy showing eosinophilic infiltration (≥ 15 eosinophils/high-powered field). Although visible abnormalities (eg, linear furrows, strictures, stacked circular rings, loss of vascular markings, white exudates) may be apparent on endoscopy, the appearance can be normal, so biopsies are essential. Because GERD can also cause eosinophilic infiltrates, patients who have mainly reflux symptoms should have biopsies; samples from the proximal and middle esophagus should be processed separately from samples from the distal esophagus.

is occasionally used in patients with symptoms, despite histologic remission, to ensure there are no subtle strictures.

Testing for food allergies Diagnosis Food allergy is an exaggerated immune response to dietary components, usually proteins. Manifestations vary widely and can include atopic dermatitis, gastrointestinal or respiratory symptoms... read more is often done to identify possible triggers but is of minimal benefit because eosinophilic esophagitis is not thought to be IgE-mediated.

In adults, first-line medical therapy is a proton pump inhibitor (PPI). In children, PPIs are typically used if dietary changes are ineffective. PPIs are thought to work via the eotaxin-3 pathway.

If PPI therapy fails, topical corticosteroids are often given to treat eosinophilic esophagitis. Patients may use a multi-dose inhaler of fluticasone (880 mcg twice a day); they puff the drug into their mouth without inhaling and then swallow it. Alternatively, budesonide 1 to 2 mg oral viscus slurry can be taken 30 minutes after breakfast and 30 minutes after dinner. Budesonide can also be mixed with a thickener (most often a sugar substitute) into a slurry and swallowed. Fluticasone or budesonide is given for at least 8 weeks to determine efficacy. If the patient achieves remission with either of these therapies, they are often continued indefinitely. Maintenance doses of these drugs are not well established.

Recent studies show that monoclonal antibodies against interleukin-13 (IL-13) and IL-5 may be beneficial; further studies are ongoing.

The six-food elimination diet is the most often recommended diet for eosinophilic esophagitis. This diet eliminates the foods most likely to causes IgE-mediated food reactions (milk, egg, soy, wheat, peanuts/tree nuts, fish/shellfish). It has been shown to be superior to an elimination diet that is based on skin and blood testing. Other variations of this elimination diet include the 2-4-6 step-up diet as well as partial elimination diets (eg, two foods, four foods). Studies show the elemental diet is successful in both adults and children but is often not practical in adults.

Injection and infusion therapies that target the eosinophil pathway in the body are being studied for eosinophilic esophagitis.

Merck & Co., Inc., Rahway, NJ, USA is a global healthcare leader working to help the world be well. From developing new therapies that treat and prevent disease to helping people in need, we are committed to improving health and well-being around the world.  The Merck Manual was first published in 1899 as a service to the community.  The legacy of this great resource continues as the MSD Manual outside of North America. Learn more about our commitment to Global Medical Knowledge.