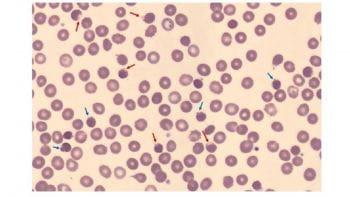 Hereditary Erythrocyte G6PD Deficiency
Glucose-6-phosphate dehydrogenase (G6PD) deficiency is an X-linked enzymatic defect common in blacks, which can result in hemolysis after acute illnesses or intake of oxidant drugs (including salicylates and sulfonamides). Diagnosis is based on assay for G6PD, although test results are often falsely negative during acute hemolysis due to the presence of reticulocytes, which are richer in G6PD than older cells. Treatment is supportive.

G6PD deficiency, a defect in the hexose monophosphate shunt pathway, is the most common disorder of red blood cell (RBC) metabolism. The G6PD gene is located on the X chromosome and exhibits a high amount of variation (polymorphism), resulting in a range of G6PD activity from normal to severely deficient. Variants are classified I through V by the amount of activity of the G6PD enzyme. Because the gene is X-linked, males are more likely to present with clinically significant hemolysis, although females who are homozygous, or who are heterozygous with skewed X inactivation that results in a high proportion of affected X chromosomes (see Mosaicism Mosaicism Certain situations represent aberrant inheritance, often because genes or chromosomes are altered. However, some of these alterations, such as mosaicism, are very common; others, such as polymorphisms... read more ) may also be affected.

Less commonly, hemolysis occurs after exposure to drugs or to other substances that produce peroxide and cause oxidation of hemoglobin and RBC membranes. These drugs and substances include primaquine, salicylates, sulfonamides, nitrofurans, phenacetin, naphthalene, some vitamin K derivatives, dapsone, phenazopyridine, nalidixic acid, methylene blue, and, in some cases, fava beans. The amount of hemolysis depends on the degree of G6PD deficiency and the oxidant potential of the drug.

Symptoms and Signs of G6PD Deficiency

In most cases, hemolysis affects < 25% of RBC mass and causes transient jaundice Jaundice Jaundice is a yellowish discoloration of the skin and mucous membranes caused by hyperbilirubinemia. Jaundice becomes visible when the bilirubin level is about 2 to 3 mg/dL (34 to 51 micromol/L)... read more

and dark urine. Some patients have back and/or abdominal pain. However, when the deficiency is more severe, profound hemolysis may lead to hemoglobinuria and acute kidney injury Acute Kidney Injury (AKI) Acute kidney injury is a rapid decrease in renal function over days to weeks, causing an accumulation of nitrogenous products in the blood (azotemia) with or without reduction in amount of urine... read more .

The diagnosis is considered in patients with evidence of acute hemolysis, particularly males with a direct antiglobulin–negative hemolytic anemia (see Diagnosis of Hemolytic Anemia Diagnosis At the end of their normal life span (about 120 days), red blood cells (RBCs) are removed from the circulation. Hemolysis is defined as premature destruction and hence a shortened RBC life span ( read more

The peripheral smear may reveal RBCs that appear to have had one or more bites (1-micron wide) taken from the cell periphery (bite or blister cells) and RBCs with inclusions termed Heinz bodies, which are particles of denatured hemoglobin, which can be recognized only by special stains. These cells may be visible early during the hemolytic episode but do not persist in patients with an intact spleen, which removes them.

Testing for G6PD activity is available. However, during and immediately after a hemolytic episode, tests may yield false-negative results because of destruction of the older, more deficient RBCs and the production of reticulocytes, which are rich in G6PD. Thus, testing may need to be repeated several weeks after the acute event. Several screening tests are available, including point-of-care tests; positive results should be confirmed with a quantitative test.

During acute hemolysis, treatment is supportive; transfusions are rarely needed. Patients are advised to avoid drugs or substances that initiate hemolysis.