Last full review/revision Aug 2021| Content last modified Aug 2021
Click here for Patient Education
Topic Resources
Intussusception is telescoping of one portion of the intestine (intussusceptum) into an adjacent segment (intussuscipiens), causing intestinal obstruction and sometimes intestinal ischemia. Diagnosis is by ultrasonography. Treatment is with an air enema and sometimes surgery.

Most cases are idiopathic. However, there is a slight male predominance as well as a seasonal variation; peak incidence coincides with the viral enteritis season. An older rotavirus vaccine was associated with a marked increase in risk of intussusception and was taken off the market in the US. The newer rotavirus vaccines, when given in the recommended sequence and timing, are not associated with any clinically significant increased risk.

In about 25% of children who have intussusception, typically very young and older children, a lead point (ie, a mass or other intestinal abnormality) triggers the telescoping. Examples include polyps Polyps of the Colon and Rectum An intestinal polyp is any mass of tissue that arises from the bowel wall and protrudes into the lumen. Most are asymptomatic except for minor bleeding, which is usually occult. The main concern... read more 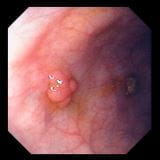 is also a risk factor.

Symptoms and Signs of Intussusception

The initial symptoms of intussusception are sudden onset of significant, colicky abdominal pain that recurs every 15 to 20 minutes, often with vomiting. The child appears relatively well between episodes. Later, as intestinal ischemia develops, pain becomes steady, the child becomes lethargic, and mucosal hemorrhage causes heme-positive stool on rectal examination and sometimes spontaneous passage of a currant-jelly stool. The latter, however, is a late occurrence, and physicians should not wait for this symptom to occur to suspect intussusception. A palpable abdominal mass, described as sausage-shaped, is sometimes present. Perforation results in signs of peritonitis, with significant tenderness, guarding, and rigidity. Pallor, tachycardia, and diaphoresis indicate shock.

About 5 to 10% of children present without the colicky pain phase. Instead, they appear lethargic, as if drugged (atypical or apathetic presentation). In such cases, the diagnosis of intussusception is often missed until the currant-jelly stool appears or an abdominal mass is palpated.

Suspicion of the diagnosis must be high, particularly in children with atypical presentation, and studies and intervention must be done urgently, because survival and likelihood of nonoperative reduction decrease significantly with time. Approach depends on clinical findings. Ill children with signs of peritonitis require fluid resuscitation Resuscitation Dehydration is significant depletion of body water and, to varying degrees, electrolytes. Symptoms and signs include thirst, lethargy, dry mucosa, decreased urine output, and, as the degree... read more , broad-spectrum antibiotics (eg, ampicillin, plus gentamicin and clindamycin; metronidazole plus either cefotaxime or piperacillin-tazobactam), nasogastric suction, and surgery. Clinically stable children require imaging studies to confirm the diagnosis and treat the disorder.

Barium enema was once the preferred initial study because it revealed the classic coiled-spring appearance around the intussusceptum. In addition to being diagnostic, barium enema was also usually therapeutic; the pressure of the barium often reduced the telescoped segments. However, barium occasionally enters the peritoneum through a clinically unsuspected perforation and causes significant peritonitis. Currently, ultrasonography is the preferred means of diagnosis; it is easily done, relatively inexpensive, and safe; the characteristic finding is termed the target sign.

At times, an intussusception is seen incidentally on an imaging study, such as a CT scan. If children have no symptoms of intussusception, they can be followed and no intervention is required.

If intussusception is confirmed, an air enema is used for reduction, which lessens the likelihood and consequences of perforation. The intussusceptum can be successfully reduced in 75 to 95% of children. If the air enema is successful, children are observed overnight to rule out occult perforation. If reduction is unsuccessful or if the intestine has perforated, immediate surgery is required.

When reduction is achieved without surgery, the recurrence rate is 5 to 10%.