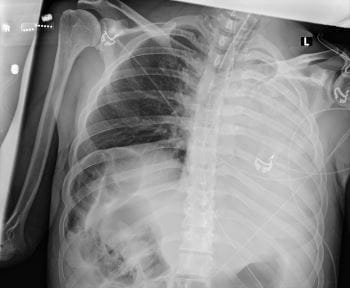 Atelectasis and Left Lung Collapse (X-Ray)
Atelectasis is collapse of lung tissue with loss of volume. Patients may have dyspnea or respiratory failure if atelectasis is extensive. They may also develop pneumonia. Atelectasis is usually asymptomatic, but hypoxemia and pleuritic chest pain may be present in certain cases. Diagnosis is by chest x-ray. Treatment includes maintaining coughing and deep breathing and treating the cause.

The natural tendency for open air spaces such as the alveoli to collapse is countered by the following:

Major consequences of atelectasis include underventilation (with hypoxia and ventilation/perfusion [V/Q] mismatch) and pneumonia.

The most common factors that can cause atelectasis include the following:

Thoracic and abdominal surgeries are very common causes because they involve general anesthesia, opioid use (with possible secondary respiratory depression), and often painful respiration. A malpositioned endotracheal tube can cause atelectasis by occluding a mainstem bronchus.

Symptoms and Signs of Atelectasis

Pneumonia may cause cough, dyspnea, and pleuritic pain. Pleuritic pain may also be due to the disorder that caused atelectasis (eg, chest trauma, surgery).

Signs are often absent. Decreased breath sounds in the region of atelectasis and possibly dullness to percussion and decreased chest excursion are detectable if the area of atelectasis is large.

Atelectasis should be suspected in patients who have any unexplained respiratory symptoms and who have risk factors, particularly recent major surgery. Atelectasis that is clinically significant (eg, that causes symptoms, increases risk of complications, or meaningfully affects pulmonary function) is generally visible on chest x-ray; findings can include lung opacification and/or loss of lung volume.

If the cause of atelectasis is not clinically apparent (eg, if it is not recent surgery or pneumonia seen on chest x-ray) or another disorder is suspected (eg, pulmonary embolism, tumor), other tests, such as bronchoscopy or chest computed tomography (CT), may be necessary.

Evidence for the efficacy of most treatments for atelectasis is weak or absent. Nonetheless, commonly recommended measures include chest physiotherapy Chest Physiotherapy Chest physiotherapy consists of external mechanical maneuvers, such as chest percussion, postural drainage, and vibration, to augment mobilization and clearance of airway secretions. It is indicated... read more to help maintain ventilation and clearance of secretions, and encouragement of lung expansion techniques such as directed cough, deep breathing exercises, and use of an incentive spirometer.

For patients who are not intubated and do not have excessive secretions, continuous positive airway pressure may help. For patients who are intubated and mechanically ventilated Overview of Mechanical Ventilation Mechanical ventilation can be Noninvasive, involving various types of face masks Invasive, involving endotracheal intubation Selection and use of appropriate techniques require an understanding... read more , positive end-expiratory pressure and/or higher tidal volume ventilation may help.

Avoiding oversedation helps ensure ventilation and sufficient deep breathing and coughing. However, severe pleuritic pain may impair deep breathing and coughing and may be relieved only with opioids. Thus, many clinicians prescribe opioid analgesics in doses sufficient to relieve pain and advise patients to consciously cough and take deep breaths periodically. In certain postoperative patients, epidural analgesia or an intercostal nerve block may be used to relieve pain without causing respiratory depression. Antitussive therapy should be avoided.

Most importantly, the cause of atelectasis (eg, mucous plug, foreign body, tumor, mass, pulmonary effusion) should be treated. For persistent mucous plugging, nebulized dornase alfa and sometimes bronchodilators are tried. N-Acetylcysteine is usually avoided because it can cause bronchoconstriction. If other measures are ineffective or if a cause of obstruction other than mucous plugging is suspected, bronchoscopy should be done.

) should be optimized before surgery. Preoperative inspiratory muscle training (including incentive spirometry) should be considered for patients scheduled for thoracic or upper abdominal surgery.

Other Types of Respiratory Failure