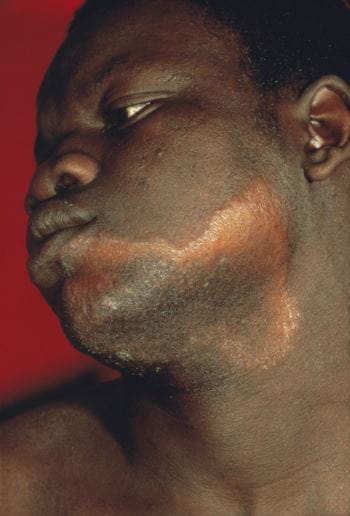 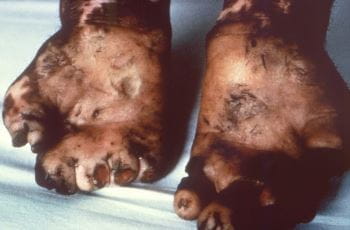 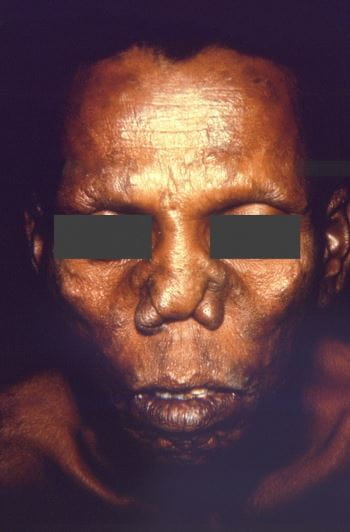 Severe Effects of Leprosy Affecting the Nose
Leprosy is a chronic infection caused by the bacteria Mycobacterium leprae or Mycobacterium lepromatosis. It results in damage primarily to the peripheral nerves (the nerves outside the brain and spinal cord), skin, testes, eyes, and mucous membranes of the nose and throat.

Because without treatment, people with leprosy are visibly disfigured and often have significant disability, they have long been feared and shunned by others. Although leprosy is not highly contagious, rarely causes death, and can be effectively treated with antibiotics, it still has considerable social stigma attached to it. As a result, people with leprosy and their family members often have psychologic and social problems.

In the United States, most leprosy cases occur in people who worked in or emigrated from developing countries where leprosy is common. Over 70% of cases occurred in seven states: Arkansas, California, Florida, Hawaii, New York, Texas, and Louisiana. Some cases are thought to be related to contact with armadillos, which carry leprosy bacteria.

Leprosy can develop at any age but appears to develop most often in people aged 5 to 15 years or over 30.

Leprosy may be passed from person to person through droplets expelled from the nose and mouth of an infected person and breathed in or touched by an uninfected person. But even after contact with the bacteria, most people do not contract leprosy. About half of the people with leprosy probably contracted it through close, long-term contact with an infected person. Casual and short-term contact does not seem to spread the disease. Leprosy cannot be contracted by simply touching someone with the disease, as is commonly believed. Health care workers often work for many years with people who have leprosy without contracting the disease.

Armadillos are the only confirmed source other than people, although other animal and environmental sources may exist.

Leprosy can be categorized by the type and number of skin areas affected as follows:

People with paucibacillary leprosy have 5 or fewer affected skin areas. No bacteria can be detected on samples from these areas.

People have multibacillary leprosy if they have 6 or more affected areas and/or if bacteria are detected in a sample from an affected skin area.

Leprosy can also be classified based on the symptoms people have and other findings as follows:

People with lepromatous leprosy typically have more skin areas affected (multibacillary), and the disease is more severe, common, and contagious.

People with borderline leprosy have features of tuberculoid and lepromatous leprosy.

In both classifications, the type of leprosy determines the following:

Because the bacteria that cause leprosy multiply very slowly, symptoms usually do not begin until at least 1 year after people have been infected. On average, symptoms appear 5 to 7 years after infection but may take 20 to 30 years. Once symptoms begin, they progress slowly.

Leprosy affects mainly the skin and peripheral nerves. Characteristic rashes and bumps develop. They are not itchy. Infection of the nerves makes the skin numb or the muscles weak in areas controlled by the infected nerves.

Specific symptoms vary depending on the type of leprosy.

The most severe symptoms result from infection of the peripheral nerves, which causes deterioration of the sense of touch and a corresponding inability to feel pain and temperature. People with peripheral nerve damage may unknowingly burn, cut, or otherwise harm themselves. Repeated damage may eventually lead to loss of fingers and toes. Also, damage to peripheral nerves may cause muscle weakness that can result in deformities. For example, the fingers may be weakened, causing them to curve inward (like a claw). Muscles may become too weak to flex the foot—a condition called footdrop. Infected nerves may enlarge so that during a physical examination, doctors can feel them.

Skin infection can lead to areas of swelling and lumps, which can be particularly disfiguring on the face.

Other areas of the body may be affected:

During the course of untreated or even treated leprosy, the immune system may produce inflammatory reactions. These reactions can cause fever and inflammation of the skin, peripheral nerves, and, less commonly, the lymph nodes, joints, testes, kidneys, liver, and eyes. The reactions can also contribute to nerve damage. The skin around bumps may swell and become red and painful, and the bumps may form open sores. People may have a fever, swollen lymph glands, and painful joints.

Doctors may suspect leprosy based on symptoms, such as distinctive rashes that do not disappear, enlarged nerves, loss of the sense of touch, and deformities that result from muscle weakness. But in the United States, doctors may not think of leprosy because it is rare and they are unfamiliar with its symptoms.

Examination of a sample of infected skin tissue under a microscope (biopsy) confirms the diagnosis. Because leprosy bacteria do not grow in the laboratory, culture of tissue samples is not useful.

Blood tests to measure antibodies to the bacteria have limited usefulness because antibodies are not always present. (Antibodies are produced by the immune system to help defend the body against a particular attacker, including leprosy bacteria.)

Because leprosy is not very contagious, risk of spread is low. Only the untreated lepromatous form is contagious, although even then the infection is not easily spread. Once treatment has begun, leprosy cannot be spread.

The best way to prevent leprosy is to

Antibiotics can stop the progression of leprosy but do not reverse any nerve damage or deformity. Thus, early detection and treatment are vitally important.

Because leprosy bacteria become resistant to an antibiotic if it is used alone, doctors prescribe more than one drug.

Because the bacteria are difficult to eradicate, antibiotics must be continued for a long time. Depending on the severity of the infection, antibiotics are taken for 6 months to many years.

The drugs chosen depend on the type of leprosy:

Dapsone is relatively inexpensive and generally safe to use. It occasionally causes allergic rashes and anemia.

Rifampin, which is more expensive, is even more effective than dapsone. Its most serious side effects are damage to the liver, flu-like symptoms and, rarely, kidney failure.

Clofazimine is extremely safe. The main side effect is temporary skin pigmentation, which may take months to disappear.

Inflammatory reactions to leprosy are treated with corticosteroids. Mild skin inflammation does not require any treatment.