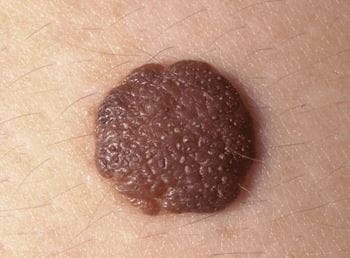 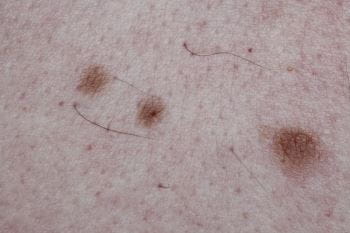 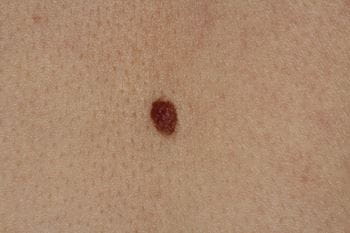 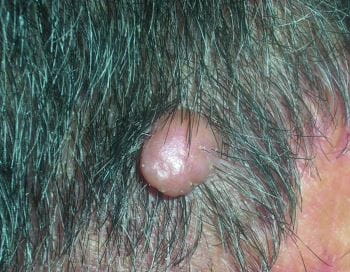 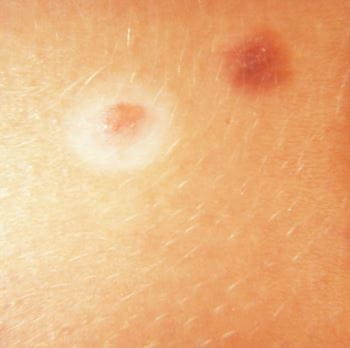 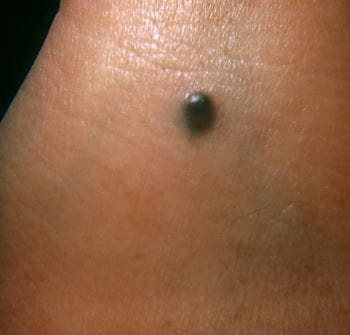 Classification of Moles
Moles are flesh- to brown-colored macules, papules, or nodules composed of nests of melanocytes or nevus cells. Their main significance (other than cosmetic) is their resemblance to melanoma. Pigmented lesions are assessed for characteristics of concern (new or changing appearance, irregular borders, multiple colors within one lesion, bleeding, ulceration, or itching) that could suggest atypical nevi or melanoma Melanoma Malignant melanoma arises from melanocytes in a pigmented area (eg, skin, mucous membranes, eyes, or central nervous system). Metastasis is correlated with depth of dermal invasion. With spread... read more 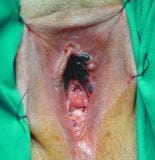 Almost everyone has a few moles, which usually appear in childhood or adolescence. There are different types of moles (see table Classification of Moles Classification of Moles Moles are flesh- to brown-colored macules, papules, or nodules composed of nests of melanocytes or nevus cells. Their main significance (other than cosmetic) is their resemblance to melanoma... read more

). During adolescence, more moles often appear, and existing ones may enlarge or darken. Nevus cells may be eventually replaced with fat or fibrous tissue. Moles typically change consistency, becoming softer and boggy, or firmer, and less pigmented over the decades.

An individual mole is unlikely to become malignant (lifetime risk is about 1 in 3,000 to 10,000); however, patients with large numbers of benign moles (> about 50) have an increased risk of developing melanoma. These patients should be taught to self-monitor for warning signs and have skin surveillance as part of their primary care (see diagnosis of moles Diagnosis Moles are flesh- to brown-colored macules, papules, or nodules composed of nests of melanocytes or nevus cells. Their main significance (other than cosmetic) is their resemblance to melanoma... read more

Blue nevi are benign moles that appear as bluish gray macules or thin papules. The depth and density of pigment in the skin account for the apparent blue color.

Because moles are extremely common and melanomas are uncommon, prophylactic removal is not justifiable. However, biopsy and histologic evaluation should be considered if moles have certain characteristics of concern (known as the ABCDEs of melanoma):

If a mole becomes painful or itchy or bleeds or ulcerates, biopsy can also be considered.

The biopsy specimen must be deep enough for accurate microscopic diagnosis and should contain the entire lesion if possible, especially if the concern for cancer is strong. However, wide primary excision should not be the initial procedure, even for highly abnormal-appearing lesions. Many such lesions are not melanomas and, even with melanoma, the proper treatment margin and recommendation for lymph node sampling is determined based on histopathologic features. Excisional biopsy does not increase the likelihood of metastasis if the lesion is malignant, and it avoids extensive surgery for a benign lesion.

Moles can be removed by shaving or excision for cosmetic purposes, and all moles removed should be examined histologically. If hair growth is a concern for the patient, a hairy mole should be adequately excised rather than removed by shaving. Otherwise, hair will regrow.