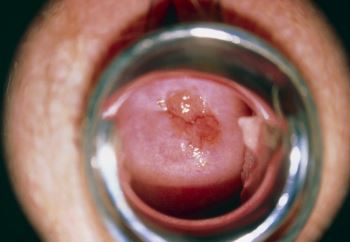 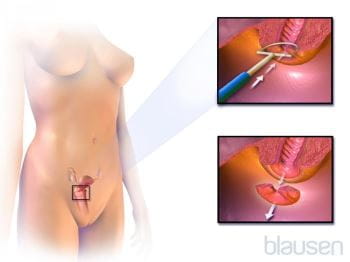 Risk factors for cervical cancer include

Regardless of sexual history, clinicians should assume that women have been exposed to someone with HPV because it is ubiquitous.

CIN is graded as

CIN 3 is unlikely to regress spontaneously; if untreated, it may, over months or years, penetrate the basement membrane, becoming invasive carcinoma.

About 80 to 85% of all cervical cancers are squamous cell carcinoma; most of the rest are adenocarcinomas. Sarcomas and small cell neuroendocrine tumors are rare.

Invasive cervical cancer usually spreads by direct extension into surrounding tissues or via the lymphatics to the pelvic and para-aortic lymph nodes. Hematogenous spread is possible but rare.

If cervical cancer spreads to the pelvic or para-aortic lymph nodes, the prognosis is worse, and the location and size of the radiation therapy field is affected.

Symptoms and Signs of Cervical Cancer

Early cervical cancer can be asymptomatic.

When symptoms occur, they usually include irregular vaginal bleeding, which is most often postcoital but may occur spontaneously between menses. Larger cancers are more likely to bleed spontaneously and may cause a foul-smelling vaginal discharge or pelvic pain. More widespread cancer may cause obstructive uropathy, back pain, and leg swelling due to venous or lymphatic obstruction.

Pelvic examination may detect an exophytic necrotic tumor in the cervix.

Cervical cancer may be suspected during a routine gynecologic examination. It is considered in women with

]). Further evaluation is indicated if atypical or cancerous cells are found, particularly in women at risk. If cytology does not show any obvious cancer, colposcopy (examination of the vagina and cervix with a magnifying lens) can be used to identify areas that require biopsy. Colposcopy-directed biopsy with endocervical curettage is usually diagnostic. If not, cone biopsy (conization) is required; a cone of tissue is removed using a loop electrical excision procedure (LEEP), laser, or cold knife.

Cervical cancer staging was revised in 2018. The previous FIGO 2009 staging system allowed only clinical examination and a few additional tests to assign the stage. The FIGO 2018 staging system allows, when available, cross-sectional imaging (eg, ultrasonography, CT, MRI, positron emission tomography [PET], PET-CT, MRI-PET) and pathology results to supplement clinical findings in all stages. Imaging and pathology results are optional because they may be not available in low- and lower middle-income countries, where cervical cancer is more common (2 Diagnosis references Cervical cancer is usually a squamous cell carcinoma caused by human papillomavirus infection; less often, it is an adenocarcinoma. Cervical neoplasia is asymptomatic; the first symptom of early... read more

Other changes in the 2018 staging system include

If the stage is > IA2, CT or MRI of the abdomen and pelvis is typically done to better determine tumor size, parametrial involvement, vaginal compromise, and nodal metastases. PET with CT (PET/CT) is being used more commonly to check for spread beyond the cervix. If PET/CT, MRI, or CT is not available, cystoscopy, sigmoidoscopy, and IV urography, when clinically indicated, may be used for staging.

When imaging tests suggest that pelvic or para-aortic lymph nodes are grossly enlarged (> 2 cm), surgical exploration, typically with a retroperitoneal approach, may be indicated. Its sole purpose is to remove enlarged lymph nodes so that radiation therapy can be more precisely targeted and more effective.

In squamous cell carcinoma, distant metastases usually occur only when the cancer is advanced or recurrent. The 5-year survival rates are as follows:

Nearly 80% of recurrences manifest within 2 years.

Treatment of cervical cancer may include surgery, radiation therapy, and chemotherapy. If hysterectomy is indicated but patients are not ideal candidates for it, chemoradiation is used and has similar oncologic outcomes.

Microinvasive cervical cancer, defined as FIGO stage IA1 with no lymphovascular space invasion (LVSI), has a < 1% risk of lymph node metastases and may be managed conservatively with conization using LEEP, laser, or cold knife. Conization is indicated for patients who are interested in preserving fertility (to obtain, if possible, a nonfragmented specimen with a 3-mm margin).

For stage IA1 with LVSI or stage IA2, recommended treatments include

For stages IB1, IB2, and IIA1, the standard recommendation is

Radical hysterectomy includes resection of the uterus (including the cervix), parts of the cardinal and uterosacral ligaments, the upper 1 to 2 cm of the vagina, and the pelvic lymph nodes. Results from a phase III prospective randomized trial (1 Treatment references Cervical cancer is usually a squamous cell carcinoma caused by human papillomavirus infection; less often, it is an adenocarcinoma. Cervical neoplasia is asymptomatic; the first symptom of early... read more

When patients are not considered ideal candidates for surgery because of comorbidities, another valid option is external pelvic radiation therapy and brachytherapy with or without concurrent platinum-based chemotherapy.

If extracervical spread is noted during radical hysterectomy, the procedure should be aborted, and postoperative radiation therapy with concurrent chemotherapy is recommended to prevent local recurrence.

The standard therapy is

Surgical staging may be considered to determine whether para-aortic lymph nodes are involved and thus whether extended-field radiation therapy is indicated, particularly in patients with positive pelvic lymph nodes identified during pretreatment imaging. A laparoscopic retroperitoneal approach is recommended.

When cancer is limited to the cervix and/or pelvic lymph nodes, the standard recommendation is

Chemotherapy (cisplatin or carboplatin) is usually given with radiation therapy, often to sensitize the tumor to radiation.

Although stage IVA cancers are usually treated with radiation therapy initially, pelvic exenteration (excision of all pelvic organs) may be considered. If after radiation therapy, cancer remains but is confined to the central pelvis, exenteration is indicated and cures up to 40% of patients. The procedure may include continent or incontinent urostomy, low anterior rectal anastomosis without colostomy or with an end-descending colostomy, omental carpet to close the pelvic floor (J-flap), and vaginal reconstruction with gracilis or rectus abdominis myocutaneous flaps.

Chemotherapy is the primary treatment. Response rates are about 48%.

Adding bevacizumab to combination chemotherapy (cisplatin plus paclitaxel or topotecan plus paclitaxel) resulted in an improvement of 3.7 months in median overall survival in patients with recurrent, persistent, or metastatic cervical cancer (4 Treatment references Cervical cancer is usually a squamous cell carcinoma caused by human papillomavirus infection; less often, it is an adenocarcinoma. Cervical neoplasia is asymptomatic; the first symptom of early... read more

Metastases outside the radiation field appear to respond better to chemotherapy than does previously irradiated cancer or metastases in the pelvis.

because only 15 to 20% of these patients have positive nodes. SLN mapping therefore decreases the number of full pelvic lymphadenectomies, which can have adverse effects (eg, lymphedema, nerve damage).

For SLN mapping, blue dye, technetium-99 (99Tc), or indocyanine green (ICG) is directly injected into the cervix, usually at 3 and 9 o’clock. During surgery, SLNs are identified by direct visualization of blue dye, by a camera to detect the fluorescence of ICG, or by a gamma probe to detect 99Tc. SLNs are commonly located medial to the external iliac vessels, ventral to the hypogastric vessels, or in the superior part of the obturator space.

Ultrastaging of all SLNs is done to detect micrometastasis and isolated tumor cells (low-volume disease). Any grossly suspicious node must be removed regardless of mapping. If there is no mapping on a hemipelvis, a side-specific lymphadenectomy is done. In the 2018 FIGO staging system, only macrometastases and micrometastases are considered when classifying cases as IIIC; isolated tumor cells do not change the stage, they are considered pN0.

In some patients who have early-stage cervical cancer (IA1 with LVSI, IA2, IB1, some cases of IB2) and who wish to preserve fertility, a radical trachelectomy may be done. An abdominal, vaginal, laparoscopic, or robotic-assisted approach can be used. In this procedure, the cervix, parametria immediately adjacent to the cervix, upper 2 cm of the vagina, and pelvic lymph nodes are removed. The remaining uterus is reattached to the upper vagina, preserving the potential for fertility. Ideal candidates for this procedure are patients with the following:

Invasion of the upper cervix and lower uterine segment should be excluded by MRI before surgery. Rates of recurrence and death are similar to those after radical hysterectomy. If patients who have this procedure plan to have children, delivery must be cesarean. After a radical trachelectomy, fertility rates range from 50 to 70%, and the recurrence rate is about 5 to 10%.

Two types of screening tests for cervical abnormalities are used:

If women have had a hysterectomy for a disorder other than cancer and have not had abnormal Pap test results, screening is not indicated. (See also Cervical Cancer Screening Guidelines, which does not yet reflect the 2020 update of ACS guidelines.)

HPV testing is the preferred method of follow-up evaluation for all women with ASCUS (atypical squamous cells of undetermined significance), an inconclusive finding detected by Pap tests. If HPV testing shows that the woman does not have HPV, screening should continue at the routinely scheduled intervals. If HPV is present, colposcopy should be done.

Preventive HPV vaccines Human Papillomavirus (HPV) Vaccine Human papillomavirus (HPV) infection is the most common sexually transmitted disease. HPV can cause skin warts, genital warts, or certain cancers, depending on the type of HPV. Vaccines are... read more include

The vaccines aim to prevent cervical cancer but do not treat it.

The HPV vaccine is recommended for boys and girls, ideally before they become sexually active. The standard recommendation is to vaccinate boys and girls beginning at age 11 to 12 years, but vaccination can begin at age 9.