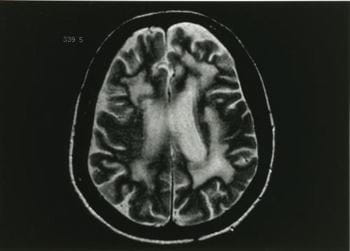 Progressive Multifocal Leukoencephalopathy
Progressive multifocal leukoencephalopathy (PML) is caused by reactivation of the JC virus. The disease usually occurs in patients with impaired cell-mediated immunity, particularly patients with HIV infection. PML results in subacute and progressive demyelination in the central nervous system, multifocal neurologic deficits, and death, usually within 9 months. Diagnosis is with MRI plus cerebrospinal fluid analysis using polymerase chain reaction testing. In AIDS patients, highly active antiretroviral therapy may slow down the progression, and patients taking immunosuppressants may improve when those drugs are withdrawn. Treatment is otherwise supportive.

Progressive multifocal leukoencephalopathy is caused by reactivation of the JC virus, a ubiquitous human papovavirus that is typically acquired during childhood and remains latent in the kidneys and possibly other sites (eg, mononuclear cells, central nervous system [CNS]). The reactivated virus has a tropism for oligodendrocytes.

The risk in AIDS increases with increasing HIV viral load; prevalence of PML has decreased because of widespread use of more effective antiretrovirals.

Increasingly, PML is occurring as a complication of immunomodulatory therapy. The drugs most frequently implicated include

Symptoms and Signs of PML

Clumsiness may be the first symptom of progressive multifocal leukoencephalopathy. Hemiparesis is the most common finding. Aphasia, dysarthria, and hemianopia are also common. Multifocal cortical damage produces cognitive impairment in two thirds of patients. Sensory, cerebellar, and brain stem deficits may be present.

Headaches and convulsive seizures are rare and occur most often in patients with AIDS.

Progressive multifocal leukoencephalopathy is suspected in patients with unexplained progressive brain dysfunction, particularly in those with depressed cell-mediated immunity.

Provisional diagnosis of PML is made by contrast-enhanced MRI, which shows single or multiple white matter lesions on T2-weighted images. A contrast agent enhances, usually faintly and peripherally, 5 to 15% of lesions. CT may show low-density, nonenhancing lesions but is significantly less sensitive than MRI.

Serologic tests are not helpful. Stereotactic biopsy can provide a definitive diagnosis but is rarely warranted.

(IRIS). In IRIS, the recovering immune system produces an intense inflammatory response against the JC virus, thus worsening symptoms. Imaging done after IRIS develops shows greater contrast enhancement of the lesions and may show significant cerebral edema. Corticosteroids may be helpful. Depending on the severity of IRIS and of AIDS, clinicians may decide to withdraw ART.

Withdrawal of immunosuppressants may result in clinical improvement. However, patients who stop taking these drugs are also at risk of developing IRIS.

If PML develops in patients taking natalizumab, another immunomodulatory drug, or an immunosuppressant, the drug should be stopped, and plasma exchange should be done to remove residual circulating drug.