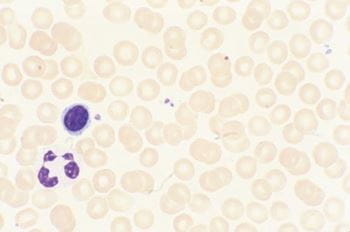 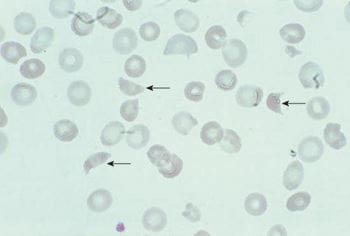 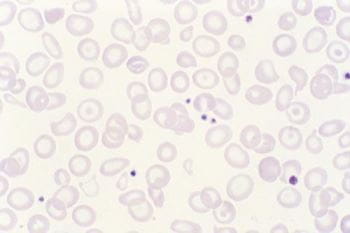 Anemia is not a diagnosis; it is a manifestation of an underlying disorder (see Etiology of Anemia Etiology of Anemia Anemia is a decrease in the number of red blood cells (RBCs), which leads to a decrease in hematocrit and hemoglobin content. (See also Red Blood Cell Production.) The RBC mass represents the... read more ). Thus, even mild, asymptomatic anemia should be investigated so that the primary problem can be diagnosed and treated.

Anemia is usually suspected based on the history and physical examination. Common symptoms and signs of anemia include

History and physical examination are followed by laboratory testing with a complete blood count and peripheral smear. The differential diagnosis (and cause of anemia) can then be further refined based on the results of testing.

The history should address

Anemia has many risk factors. For example, a vegan diet predisposes to vitamin B12 deficiency anemia Megaloblastic Macrocytic Anemias Megaloblastic anemias result most often from deficiencies of vitamin B12 and folate. Ineffective hematopoiesis affects all cell lines but particularly red blood cells. Diagnosis is usually based... read more

The symptoms of anemia are neither sensitive nor specific and do not help differentiate between types of anemias. Symptoms reflect compensatory responses to tissue hypoxia and usually develop when the hemoglobin level falls well below the patient's individual baseline. Symptoms are generally more pronounced in patients with limited cardiopulmonary reserve or in whom the anemia developed very rapidly.

Symptoms that suggest cause of anemia

A complete physical examination is necessary. Signs of anemia itself are neither sensitive nor specific; however, pallor is common with severe anemia.

Signs of underlying disorders are more diagnostically accurate than are signs of anemia. Heme-positive stool identifies gastrointestinal bleeding Overview of Gastrointestinal Bleeding Gastrointestinal (GI) bleeding can originate anywhere from the mouth to the anus and can be overt or occult. The manifestations depend on the location and rate of bleeding. (See also Varices... read more . Hemorrhagic shock Shock Shock is a state of organ hypoperfusion with resultant cellular dysfunction and death. Mechanisms may involve decreased circulating volume, decreased cardiac output, and vasodilation, sometimes... read more (eg, hypotension, tachycardia, pallor, tachypnea, diaphoresis, confusion) may result from acute bleeding. Jaundice Jaundice Jaundice is a yellowish discoloration of the skin and mucous membranes caused by hyperbilirubinemia. Jaundice becomes visible when the bilirubin level is about 2 to 3 mg/dL (34 to 51 micromol/L)... read more

may suggest hemolysis. Splenomegaly Splenomegaly Splenomegaly is abnormal enlargement of the spleen. (See also Overview of the Spleen.) Splenomegaly is almost always secondary to other disorders. Causes of splenomegaly are myriad, as are the... read more may occur with hemolysis, a hemoglobinopathy, connective tissue disease, myeloproliferative disorder, infection, or cancer. Peripheral neuropathy Peripheral Neuropathy Peripheral neuropathy is dysfunction of one or more peripheral nerves (the part of a nerve distal to the root and plexus). It includes numerous syndromes characterized by varying degrees of... read more suggests vitamin B12 deficiency Vitamin B12 Deficiency Dietary vitamin B12 deficiency usually results from inadequate absorption, but deficiency can develop in vegans who do not take vitamin supplements. Deficiency causes megaloblastic anemia, damage... read more . Abdominal distention in a patient with blunt trauma suggests acute hemorrhage or splenic rupture. Petechiae develop in thrombocytopenia or platelet dysfunction Overview of Platelet Disorders Platelets are cell fragments that function in the clotting system. Thrombopoietin helps control the number of circulating platelets by stimulating the bone marrow to produce megakaryocytes,... read more

develops as a compensatory response to anemia-induced tissue hypoxia.

Laboratory evaluation begins with a complete blood count (CBC), including white blood cell (WBC) and platelet counts, RBC indices and morphology (mean corpuscular volume [MCV], mean corpuscular hemoglobin [MCH], mean corpuscular hemoglobin concentration [MCHC], red blood cell distribution width [RDW]), and examination of the peripheral smear. The reticulocyte count demonstrates how well the bone marrow is compensating for the anemia. Subsequent tests are selected on the basis of these results and on the clinical presentation. Recognition of general diagnostic patterns can expedite the diagnosis (see table Characteristics of Common Anemias Characteristics of Common Anemias Anemia is a decrease in the number of red blood cells (RBCs—as measured by the red cell count, the hematocrit, or the red cell hemoglobin content). In men, anemia is defined as hemoglobin read more

The diagnostic criterion for anemia is

For infants, normal values vary with age, necessitating use of age-related tables (see table Age-Specific Values for Hemoglobin and Hematocrit Age-Specific Values for Hemoglobin and Hematocrit Anemia is a reduction in red cell mass or hemoglobin and is usually defined as hemoglobin or hematocrit > 2 standard deviations below the mean for age. Some authorities also consider a relative... read more ). RBC populations are termed microcytic (small cells) if MCV is < 80 fL, and macrocytic (large cells) if MCV is > 100 fL. However, because reticulocytes are also larger than mature red cells, large numbers of reticulocytes can elevate the MCV and not represent an alteration of RBC production.

Automated techniques can also determine the degree of variation in RBC size, expressed as the RBC volume distribution width (RDW). A high RDW may be the only indication of simultaneous microcytic and macrocytic disorders; such a pattern may result in a normal MCV, which measures only the mean value. The term hypochromia refers to RBC populations in which MCH is < 27 pg/RBC or MCHC is < 30%. RBC populations with normal MCH and MCHC values are normochromic.

The RBC indices can help indicate the mechanism of anemia and narrow the number of possible causes. Microcytic indices occur with altered heme or globin synthesis. The most common causes are iron deficiency, thalassemia, and related hemoglobin-synthesis defects. In some patients with anemia of chronic disease Anemia of Chronic Disease The anemia of chronic disease is a multifactorial anemia. Diagnosis generally requires the presence of a chronic inflammatory condition, such as infection, autoimmune disease, kidney disease... read more , the MCV is microcytic or borderline microcytic. Macrocytic indices occur with impaired DNA synthesis (eg, due to vitamin B12 or folate deficiencies or chemotherapeutic drugs such as hydroxyurea and antifolate agents) and in alcoholism because of abnormalities of the cell membrane. Acute bleeding may briefly produce macrocytic indices because of the release of large young reticulocytes. Normocytic indices occur in anemias resulting from deficient erythropoietin (EPO) production or inadequate response to it (hypoproliferative anemias). Hemorrhage, before iron deficiency develops, usually results in normocytic and normochromic anemia unless the number of large reticulocytes is excessive.

The peripheral smear is highly sensitive for excessive RBC production and hemolysis. It is more accurate than automated technologies for recognition of altered RBC structure, thrombocytopenia, nucleated RBCs, or immature granulocytes and can detect other abnormalities (eg, malaria and other parasites, intracellular RBC or granulocyte inclusions) that can occur despite normal automated blood cell counts. RBC injury may be identified by finding RBC fragments, portions of disrupted cells (schistocytes), or evidence of significant membrane alterations from oval-shaped cells (ovalocytes) or spherocytic cells. Target cells (thin RBCs with a central dot of hemoglobin) are RBCs with insufficient hemoglobin or excess cell membrane (eg, due to hemoglobinopathies or liver disorders). The peripheral smear can also reveal variation in RBC shape (poikilocytosis) and size (anisocytosis).

Reticulocytes are best visualized when blood is stained with a supravital stain, but because red cell reticulin is composed of RNA, which is present only in young red cells, they will have a bluish appearance in a Wright-stained blood smear (polychromatophilia or polychromasia), which can provide a rough estimate of reticulocyte production on a routine blood smear.

Cytogenetic and molecular analyses can be done on aspirate material in hematopoietic or other tumors or in suspected congenital lesions of RBC precursors (eg, Fanconi anemia). Flow cytometry can be done in suspected lymphoproliferative or myeloproliferative states to define the immunophenotype. Bone marrow aspiration and biopsy are not technically difficult and do not pose significant risk of morbidity. These procedures are safe and helpful when hematologic disease is suspected. Both usually can be done as a single procedure. Because biopsy requires adequate bone depth, the sample is usually taken from the posterior (or, less commonly, anterior) iliac crest.

Other tests for evaluation of anemia

Serum bilirubin and lactate dehydrogenase (LDH) can sometimes help differentiate between hemolysis and blood loss; both are elevated in hemolysis and normal in blood loss. Other tests, such as vitamin B12 and folate levels, iron and iron binding capacity, are done depending on the suspected cause of anemia. Other tests are discussed under specific anemias and bleeding disorders.