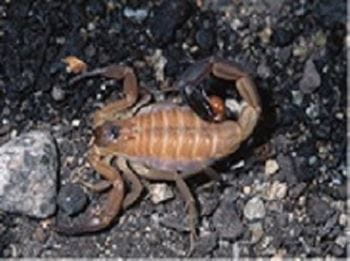 Although all scorpions in North America sting, most are relatively harmless. The stings usually cause only localized pain with minimal swelling, some lymphangitis with regional lymphadenopathy, increased skin temperature, and tenderness around the wound.

A significant exception in North America is the bark scorpion (Centruroides sculpturatus, also known as C. exilicauda), present in Arizona, in New Mexico, and on the California side of the Colorado River. This species is venomous and can cause more serious injury and illness.

Initial symptoms are immediate pain and sometimes numbness or tingling over the involved part. Swelling is usually absent, and there are few skin changes. Serious symptoms, most common among children, include

C. sculpturatus stings have resulted in death in children < 6 years and in hypersensitive people.

Diagnosis of a scorpion sting is obvious from the history. Determining the scorpion species is usually not. Several species of scorpions kept as exotic pets in the US (known by names that falsely suggest toxicity, such as yellow death stalker and black death scorpion) are similar in appearance to foreign species with dangerously toxic venom. However, the actual species of pet scorpion is seldom known by the patient or, if provided, may be unreliable. Stings should be treated as potentially dangerous until signs or lack of signs indicates otherwise.

Treatment of nonvenomous scorpion stings is based on symptoms. An ice pack over the wound and oral nonsteroidal anti-inflammatory drugs (NSAIDs) reduce pain. Treatment of venomous Centruroides stings consists of bed rest, benzodiazepines for muscle spasms, and IV drugs as needed to control hypertension, agitation, and pain. Patients should take nothing by mouth for 8 to 12 hours after the bite. For serious stings by scorpions not native to North America, prazosin may help prevent pulmonary edema due to extreme hypertension, and opioids may be indicated for pain control.

An antivenom that is specific for Centruroides is available in the US and should be given to all patients with severe symptoms and to patients who are unresponsive to supportive care, particularly children. Information about availability and dosing may be obtained by contacting a regional poison center (1-800-222-1222).