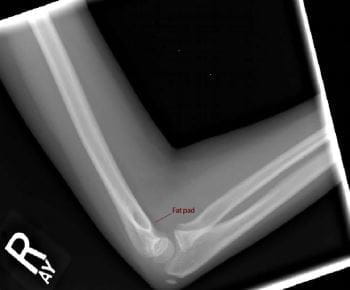 Lateral X-Ray of the Elbow 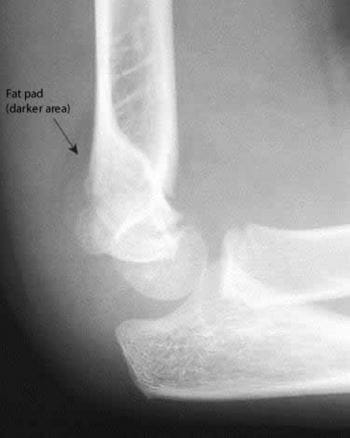 Posterior Fat Pad
Distal humeral fractures usually result from a fall on an outstretched arm or direct force; they may be associated with neurovascular injury.

Distal humeral fractures are common among children aged 3 to 11 years. The usual injury mechanism is a fall on an outstretched arm with the elbow extended or direct force, often causing posterior displacement or angulation.

The brachial artery or median or radial nerve may be damaged, particularly when the fracture is posteriorly displaced or angulated. Neurovascular injury sometimes leads to compartment syndrome of the forearm, which can cause Volkmann ischemic contracture (a flexion contracture at the wrist resulting in a clawlike hand deformity). Fractures are usually intra-articular, causing hemarthrosis.

The elbow area is painful and swollen, and the elbow's range of motion is limited.

A fracture line may not be visible, but other x-ray findings may suggest fracture. They include

A posterior fat pad on a true lateral x-ray of the elbow is always abnormal; this finding is specific for joint effusion but not highly sensitive.

A displaced anterior fat pad may indicate joint effusion but is not specific.

The radiocapitellar line is a line drawn through the midshaft of the radius on a true lateral x-ray of the elbow; normally, it bisects the capitellum. If it does not, an occult fracture should be suspected.

If findings in children are compatible with a distal humeral fracture, x-rays should be reviewed closely for evidence of occult fracture (eg, a posterior fat pad, abnormalities in the anterior humeral or radiocapitellar line).

A complete neurovascular examination is done if a fracture is suspected. Particular attention should be paid to the median, radial, and ulnar nerves. Distal pulses should be compared with those of the opposite limb, particularly if ecchymoses or enlarging swelling (which suggest brachial artery injury) are present on the anterior medial forearm.

Displaced supracondylar fractures should be splinted in the position that they are in; they should not be reduced.

Most fractures are managed by an orthopedic surgeon because long-term complications are a risk. Most patients are admitted for neurovascular observation, although some clinicians splint and discharge patients who have nondisplaced fractures if patients can be trusted to return for follow-up the next day.

Posteriorly displaced or angulated distal humeral fractures, in particular, should be reduced by an orthopedic surgeon because nerves and/or the radial artery can be injured during reduction. Casting with closed reduction may be tried but is typically not recommended because ORIF is usually necessary.

If a fracture is suspected clinically (eg, children cannot move their elbow in a normal range of motion) and x-rays appear normal, the joint should be splinted and close follow-up should be arranged.