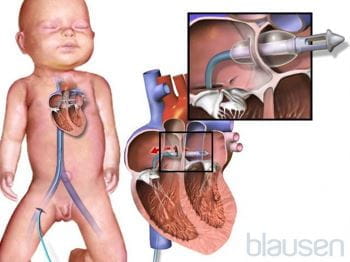 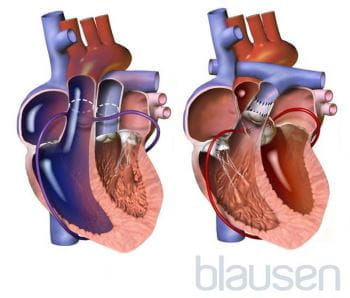 Overview of Transposition of the Great Arteries
Transposition of the great arteries (in this case, dextro-transposition) occurs when the aorta arises directly from the right ventricle and the pulmonary artery arises from the left ventricle, resulting in independent, parallel pulmonary and systemic circulations; oxygenated blood cannot reach the body except through openings connecting the right and left sides (eg, patent foramen ovale, ventricular septal defect [VSD]). Symptoms are primarily severe neonatal cyanosis and occasionally heart failure, if there is an associated VSD. Heart sounds and murmurs vary depending on the presence of associated congenital anomalies. Diagnosis is by echocardiography. Definitive treatment is surgical repair.

(VSD); up to 25% have left ventricular outflow tract obstruction (either pulmonic valve or subpulmonary stenosis).

Systemic and pulmonary circulations are completely separated in transposition of the great arteries. After returning to the right heart, desaturated systemic venous blood is pumped into the systemic circulation without being oxygenated in the lungs; oxygenated blood entering the left heart goes back to the lungs rather than to the rest of the body. This anomaly is not compatible with life unless desaturated and oxygenated blood can mix through openings at one or more levels (eg, atrial, ventricular, or great artery level).

Symptoms and Signs of TGA

Severe cyanosis occurs within hours of birth, followed rapidly by metabolic acidosis secondary to poor tissue oxygenation. Patients with a moderate or large atrial septal defect Atrial Septal Defect (ASD) An atrial septal defect (ASD) is an opening in the interatrial septum, causing a left-to-right shunt and volume overload of the right atrium and right ventricle. Children are rarely symptomatic... read more , a large ventricular septal defect, a patent ductus arteriosus Patent Ductus Arteriosus (PDA) Patent ductus arteriosus (PDA) is a persistence of the fetal connection (ductus arteriosus) between the aorta and pulmonary artery after birth. In the absence of other structural heart abnormalities... read more

, or a combination of these tend to have less severe cyanosis, but symptoms and signs of heart failure (eg, tachypnea, dyspnea, tachycardia, diaphoresis, inability to gain weight) may develop during the first weeks of life.

Except for generalized cyanosis, physical examination is rather unremarkable. Heart murmurs may be absent unless associated anomalies are present. The 2nd heart sound (S2) is single and loud.

Diagnosis of transposition of the great arteries is suspected clinically, supported by chest x-ray and ECG, and established by 2-dimensional echocardiography with color flow and Doppler studies.

On chest x-ray, the cardiac shadow may have the classic egg-on-a-string appearance with a narrow upper mediastinum. ECG shows right ventricular hypertrophy but may be normal for a neonate.

Cardiac catheterization is not usually necessary for diagnosis but may be done to enlarge the atrial communication (balloon atrial septostomy) or to further elucidate complex coronary artery anatomy.

Unless arterial oxygen saturation is only mildly decreased and the atrial communication is adequate, a PGE1 infusion may help by opening and maintaining patency of the ductus arteriosus; this infusion increases pulmonary blood flow, which may promote left-to-right atrial shunting, leading to improved systemic oxygenation. However, if the patent foramen ovale has a small opening, PGE1 may have the opposite effect because the increased blood return to the left atrium may close the flap of the foramen ovale, leading to decreased mixing, along with elevation of left atrial pressure and pulmonary edema. Also, opening the ductus may decrease systemic blood flow. Thus, PGE1 must be used with caution and patients must be monitored closely.

For severely hypoxemic neonates who do not immediately respond to PGE1 or who have a very restrictive foramen ovale, cardiac catheterization and balloon atrial septostomy (Rashkind procedure) can immediately improve systemic arterial oxygen saturation. A balloon-tipped catheter is advanced into the left atrium through the patent foramen ovale. The balloon is inflated and abruptly withdrawn to the right atrium to enlarge the opening in the atrial septum. As an alternative to taking the neonate to the catheterization laboratory, the septostomy procedure can be done at the bedside under echocardiographic guidance.

Definitive repair of D-TGA is the arterial switch (Jatene) operation, typically done during the first week of life. The proximal portions of the great arteries are transected, the coronary arteries are transplanted to the native pulmonary root, which will become the neoaortic root, the aorta is connected to the left ventricle, and the pulmonary artery is connected to the right ventricle. Survival rate after surgery is > 95%. An associated VSD should be closed at the time of primary repair unless it is small and hemodynamically insignificant. Native pulmonic stenosis is problematic unless it is mild because pulmonic stenosis will effectively become aortic stenosis after the arterial switch procedure. If pulmonic stenosis is moderate or severe, other surgical options may need to be considered.

is recommended preoperatively but is required only for the first 6 months after repair unless there is a residual defect adjacent to a surgical patch or prosthetic material.

Overview of the Spleen

Overview of Vascular Disorders of the Liver
Test your knowledge