Milestones in Sexual Development
Precocious puberty is sexual maturation that begins before age 9 in boys or before age 8 in girls.

The start of puberty takes place when the hypothalamus (the region of the brain that controls the pituitary gland) begins to secrete a chemical signal called gonadotropin-releasing hormone. The pituitary gland responds to this signal by releasing hormones called gonadotropins (luteinizing hormone and follicle-stimulating hormone), which stimulate the growth of the sex glands (the testes [testicles] in boys and the ovaries in girls). These sex glands secrete sex hormones, such as testosterone or estrogen, that cause puberty.

In boys, the first signs of puberty are enlargement of the testes and scrotum, followed by lengthening of the penis. Pubic and underarm hair (axillary hair) appear next. In boys, puberty usually begins between the ages of 10 years and 14 years (see Puberty in Boys Puberty in Boys Puberty is the stage during which people reach full reproductive ability and develop the adult features of their sex. In boys, puberty usually occurs between the ages of 10 and 14 years. However... read more ).

In girls, the first change of puberty is usually the start of breast development (breast budding). Shortly afterward, pubic and underarm hair begin to grow. In girls, puberty usually begins between the ages of 8 years and 13 years (see Puberty in Girls Puberty in Girls Puberty is a sequence of events in which physical changes occur, resulting in adult physical characteristics and capacity to reproduce. These physical changes are regulated by changes in the... read more ).

Milestones in Sexual Development for Girls and Boys

In both sexes, around the time of puberty, the adrenal gland also begins to secrete hormones that lead to the appearance of pubic and underarm hair. These adrenal hormones are controlled by different chemical signals than the other puberty hormones.

There are three types of precocious puberty:

The causes and symptoms differ between the three types.

This type of precocious puberty is more common overall and is 5 to 10 times more frequent in girls.

Puberty in this type is triggered by the early release of certain sex hormones (gonadotropins) from the pituitary gland. These hormones cause the ovaries or testes (the sex glands) to mature and enlarge. Once mature, the sex glands begin secreting other sex hormones, such as estrogen or testosterone, which triggers puberty. Physical changes are typically those of normal puberty for a child of that sex, except they begin at an earlier age.

Boys show enlargement of the testes, lengthening of the penis, and development of facial, underarm, and pubic hair and they take on a masculine appearance.

Girls develop breasts and pubic hair and underarm hair and may begin to menstruate. 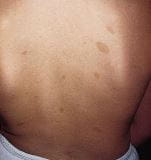 This type of precocious puberty is much less common. In peripheral precocious puberty, the release of estrogen or testosterone (and testosterone-like hormones called androgens) is not stimulated by gonadotropins from the pituitary gland. Instead, high levels of androgens or estrogen are produced by a tumor or other abnormality in the adrenal gland or in an immature testis or ovary. These hormones do not cause the testes or ovaries themselves to mature but do trigger the development of secondary sex characteristics. Because boys and girls may each produce estrogen or androgen, the physical changes of puberty depend on the hormone produced rather than the child's sex. Thus, tumors and abnormalities that produce estrogen result in growth of breast tissue in boys and girls, whereas those that produce androgens result in growth of pubic and underarm hair, adult body odor, and acne in boys and girls and, in boys, enlargement of the penis (but not the testes).

Some children prematurely develop only a few signs of puberty. Typically they have premature breast development (thelarche) or premature pubic hair development (adrenarche) without any of the other changes of puberty such as growth of the testes or ovaries, menstruation, or a growth spurt. Some girls have breast development during the first 2 years of life, but they do not have elevated hormone levels. Children with early pubic hair development (typically between 6 years and 8 years of age) often have adult-like body odor and acne. Changes progress slowly.

Whenever a child has signs of premature, rapidly progressing, or disordered puberty, doctors take an x-ray of the hand and wrist to estimate bone maturity (called a bone age x-ray).

If x-rays show that a child’s bones have a more mature appearance than they should for a typical child of that age, a more complete evaluation usually is indicated. Blood tests are done to determine hormone levels.

(MRI) of the brain to check for tumors of the hypothalamus or pituitary gland. Doctors may do genetic testing in children who have family members who have central precocious puberty.

of the pelvis and adrenal glands to check for ovarian or adrenal tumors.

Treating an identifiable cause of precocious puberty, such as removing a tumor or cyst, may stop the progression of puberty.

When no treatable cause is identified in central precocious puberty, drugs may slow the progression of puberty. The decision to give drugs depends on many factors, including the child's age, how fast puberty is progressing, how fast the child is growing, and how tall doctors think the child will be. The goals of drug treatment are to allow a child to grow to normal adult height and to relieve any anxiety the child feels due to developing sooner than peers. Treatment options include synthetic hormone injections that stop the production of sex hormones. The injections are given monthly or every three months. The hormones can also be given by an implant that is inserted under the skin every 12 months.

Peripheral precocious puberty can be stopped by drugs that block the action of the sex hormones.