Hepatitis lasting > 6 months is generally defined as chronic hepatitis, although this duration is arbitrary.

There are 6 major genotypes of hepatitis C virus (HCV), which vary in their response to treatment. Genotype 1 is more common than genotypes 2, 3, 4, 5, and 6; it accounts for 70 to 80% of cases of chronic hepatitis C in the US.

Chronic hepatitis C progresses to cirrhosis Cirrhosis Cirrhosis is a late stage of hepatic fibrosis that has resulted in widespread distortion of normal hepatic architecture. Cirrhosis is characterized by regenerative nodules surrounded by dense... read more in 20 to 30% of patients; cirrhosis often takes decades to appear. Hepatocellular carcinoma Hepatocellular Carcinoma Hepatocellular carcinoma usually occurs in patients with cirrhosis and is common in areas where infection with hepatitis B and C viruses is prevalent. Symptoms and signs are usually nonspecific... read more can result from HCV-induced cirrhosis but results only rarely from chronic infection without cirrhosis (unlike in chronic HBV infection Hepatitis B, Chronic Hepatitis B is a common cause of chronic hepatitis. Patients may be asymptomatic or have nonspecific manifestations such as fatigue and malaise. Diagnosis is by serologic testing. Without treatment... read more ).

Up to 20% of patients with alcohol-related liver disease Alcohol-Related Liver Disease Alcohol consumption is high in most Western countries. According to the Diagnostic and Statistical Manual of Mental Disorders, Fifth Edition (DSM-5), 8.5% of US adults are estimated to... read more

harbor HCV. The reasons for this high association are unclear because concomitant alcohol and drug use accounts for only a portion of cases. In these patients, HCV and alcohol act synergistically to worsen liver inflammation and fibrosis.

Many patients are asymptomatic and do not have jaundice, although some have malaise, anorexia, fatigue, and nonspecific upper abdominal discomfort. Often, the first findings are signs of cirrhosis Cirrhosis Cirrhosis is a late stage of hepatic fibrosis that has resulted in widespread distortion of normal hepatic architecture. Cirrhosis is characterized by regenerative nodules surrounded by dense... read more (eg, splenomegaly, spider nevi, palmar erythema) or complications of cirrhosis (eg, portal hypertension Portal Hypertension Portal hypertension is elevated pressure in the portal vein. It is caused most often by cirrhosis (in North America), schistosomiasis (in endemic areas), or hepatic vascular abnormalities. Consequences... read more , ascites Ascites Ascites is free fluid in the peritoneal cavity. The most common cause is portal hypertension. Symptoms usually result from abdominal distention. Diagnosis is based on physical examination and... read more , encephalopathy Portosystemic Encephalopathy Portosystemic encephalopathy is a neuropsychiatric syndrome that can develop in patients with liver disease. It most often results from high gut protein or acute metabolic stress (eg, gastrointestinal... read more ). 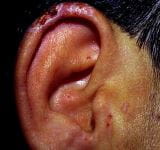 , mixed cryoglobulinemia Cryoglobulinemia Conditions that cause an abnormal protein content in the blood, typically in the form of immunoglobulins, can affect vascular fragility and lead to purpura. (See also Overview of Vascular Bleeding... read more

One-time, routine screening is recommended for all people ≥ 18 years old, regardless of risk factors.

One-time screening is recommended for people < 18 years old with the following characteristics (1, 2 Screening references Hepatitis C is a common cause of chronic hepatitis. It is often asymptomatic until manifestations of chronic liver disease occur. Diagnosis is confirmed by finding positive anti-HCV and positive... read more ):

Such testing is important because symptoms may not develop until the hepatitis C has extensively damaged the liver, years after the initial infection.

The diagnosis Diagnosis Chronic hepatitis is hepatitis that lasts > 6 months. Common causes include hepatitis B and C viruses, nonalcoholic steatohepatitis (NASH), alcohol-related liver disease, and autoimmune liver... read more of chronic hepatitis C is suspected in patients with any of the following:

Liver biopsy is rarely used in hepatitis C and has been supplanted by noninvasive imaging (eg, ultrasound elastography, magnetic resonance elastography) and serum markers of fibrosis, as well as scoring systems for fibrosis based on serologic markers.

HCV genotype is determined before treatment because genotype influences the course, duration, and success of treatment.

HCV RNA detection and quantification is used to help diagnose hepatitis C and to evaluate treatment response during and after treatment. For most currently available quantitative HCV RNA assays, the lower limit of detection is about < 12 to 15 IU/mL, depending on the assay. If a quantitative assay does not have that level of sensitivity, a qualitative assay can be used. Qualitative assays can detect very low levels of HCV RNA, often as low as < 10 IU/mL, and provide results as positive or negative. Qualitative tests can be used to confirm a diagnosis of hepatitis C or a sustained virologic response (SVR), defined as no detectable HCV RNA at 12 weeks after completion of treatment.

Other tests should be done to evaluate liver function; they include serum albumin, bilirubin, platelet count, and prothrombin time/international normalized ratio (PT/INR).

and hepatitis B infection Diagnosis Hepatitis B is caused by a DNA virus that is often parenterally transmitted. It causes typical symptoms of viral hepatitis, including anorexia, malaise, and jaundice. Fulminant hepatitis and... read more because transmission of these infections is similar.

Patients with chronic HCV infection and advanced fibrosis or cirrhosis should be screened every 6 months for hepatocellular cancer Diagnosis Hepatocellular carcinoma usually occurs in patients with cirrhosis and is common in areas where infection with hepatitis B and C viruses is prevalent. Symptoms and signs are usually nonspecific... read more with ultrasonography and serum alpha-fetoprotein measurement, although the cost-effectiveness of this practice, particularly serum alpha-fetoprotein measurement, is debated.

Prognosis depends on whether patients have a sustained virologic response (SVR), ie, no detectable HCV-RNA at 12 weeks after completion of treatment.

Patients who have an SVR have a > 99% chance of remaining HCV RNA–negative and are typically considered cured. Nearly 95% of patients with an SVR have improved histologic findings, including fibrosis and histologic activity index; in addition, risk of progression to cirrhosis, hepatic failure, and liver-related death is reduced. In patients who have cirrhosis and portal hypertension and who were treated with interferon-based regimens, an SVR has been shown to reduce portal pressures and significantly reduce risk of hepatic decompensation, liver-related death, all-cause mortality, and hepatocellular carcinoma (1 Prognosis reference Hepatitis C is a common cause of chronic hepatitis. It is often asymptomatic until manifestations of chronic liver disease occur. Diagnosis is confirmed by finding positive anti-HCV and positive... read more ).

Likelihood of achieving an SVR with direct-acting antiviral regimens seems to depend mostly on the following:

(See also the American Association for the Study of Liver Disease [AASLD]–Infectious Disease Society of America [IDSA] practice guidelines Recommendations for Testing, Managing, and Treating Hepatitis C and When and in Whom To Initiate HCV Therapy.)

For chronic hepatitis C, treatment is recommended for all patients, except those with a short life expectancy due to comorbid conditions that cannot be remediated by HCV therapy, liver transplantation, or another directed therapy.

The goal of treatment is permanent elimination of HCV RNA (ie, SVR), which is associated with permanent normalization of aminotransferase levels and cessation of histologic progression. Treatment results are more favorable in patients with less fibrosis than in patients with cirrhosis.

DAAs are not used as single drugs but are used in specific combinations to maximize efficacy.

Regimens of sofosbuvir/velpatasvir, elbasvir/grazoprevir, or glecaprevir/pibrentasvir are now considered to have a good safety profile and are effective in patients with end-stage kidney disease, including dialysis patients.

Hepatitis B reactivation resulting in liver failure and death has been reported during or after HCV treatment with DAAs. Therefore, all patients with hepatitis C being treated with DAAs should be checked for evidence of chronic or prior hepatitis B; tests should include all of the following:

Genotype 1 is more resistant to traditional treatment with dual therapy with pegylated interferon-alpha plus ribavirin than other genotypes. However, now with the use of interferon-free regimens of direct-acting antivirals (DAAs), the rate of SVR has increased from < 50% to ≥ 95%.

First-line regimens for HCV genotype 1 include

Fixed-dose combination of ledipasvir 90 mg/sofosbuvir 400 mg is given orally once a day for 8 to 12 weeks depending on history of prior treatment, pretreatment viral load, and degree of liver fibrosis.

Fixed-dose combination of elbasvir 50 mg/grazoprevir 100 mg is given orally once a day, with or without ribavirin 500 to 600 mg orally twice a day, for 12 to 16 weeks depending on history of prior treatment, degree of liver fibrosis, and, in patients with genotype 1a, the presence or absence of baseline NS5A resistance–associated variants to elbasvir.

Fixed-dose combination of velpatasvir 100 mg/sofosbuvir 400 mg is given orally once a day for 12 weeks.

Fixed-dose combination of glecaprevir 300 mg/pibrentasvir 120 mg is given orally once a day for 8 to 16 weeks, depending on history of prior treatment and degree of liver fibrosis.

Ribavirin is usually well-tolerated but commonly causes anemia due to hemolysis; dosage should be decreased if hemoglobin decreases to < 10 g/dL (100 g/L). Ribavirin is teratogenic in both men and women, requiring contraception during treatment and for 6 months after treatment is completed.

For genotype 2, one of the following combinations is recommended:

For genotype 3, first-line treatments include

For genotype 4, first-line treatments include

For genotypes 5 and 6, first-line treatments include

Jointly issued guidance from the American Association for the Study of Liver Disease (AASLD) and the Infectious Disease Society of America (IDSA):