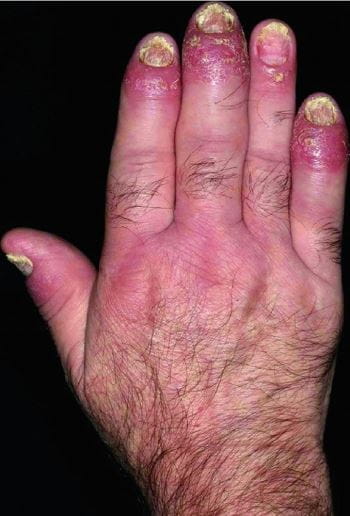 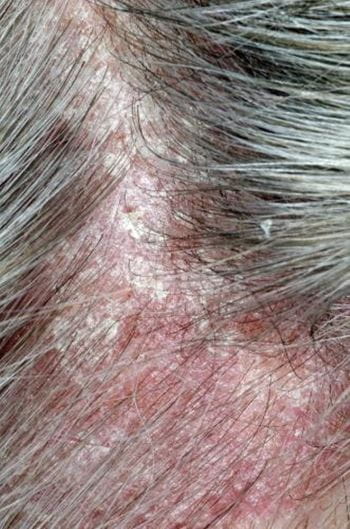 Psoriasis of the Scalp 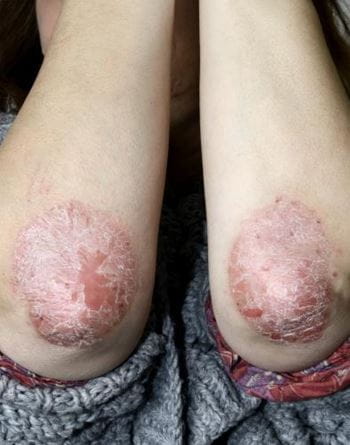 but does not produce the antibodies characteristic of rheumatoid arthritis. Psoriatic arthritis occurs in about 30% of people with psoriasis Psoriasis Psoriasis is a chronic, recurring disease that causes one or more raised, red patches that have silvery scales and a distinct border between the patch and normal skin. A problem with the immune... read more

In psoriatic arthritis, inflammation often affects joints closest to the tips of the fingers and toes, although other joints, including the hips, knees, and spine, are often affected as well. Often, the joints of the upper extremities are affected more. Back pain may be present.

The joints may become swollen and deformed when inflammation is chronic. Psoriatic arthritis affects joints asymmetrically (more on one side of the body than the other), more so than rheumatoid arthritis, and involves fewer joints. Tendons or ligaments can become inflamed where they attach to bone around the joints (called enthesitis). Some people who have psoriatic arthritis also have fibromyalgia Fibromyalgia Fibromyalgia is characterized by poor sleep, fatigue, mental cloudiness, and widespread aching and stiffness in soft tissues, including muscles, tendons, and ligaments. Poor sleep, stress, strains... read more , which causes muscle pain, joint stiffness, and fatigue.

The diagnosis of psoriatic arthritis is made by identifying the characteristic joint inflammation in a person who has arthritis and psoriasis. Doctors also ask people whether they have a family history of psoriasis.

, and x-rays Plain X-Rays X-rays are high-energy radiation waves that can penetrate most substances (to varying degrees). In very low doses, x-rays are used to produce images that help doctors diagnose disease. In high... read more are done to show the extent of joint damage.

The prognosis for psoriatic arthritis is usually better than that for rheumatoid arthritis because fewer joints are affected. Nonetheless, the joints can be severely damaged.

) are also used to treat psoriatic arthritis, particularly nonsteroidal anti-inflammatory drugs Nonsteroidal Anti-Inflammatory Drugs In some cases, treating the underlying disorder eliminates or minimizes the pain. For example, setting a broken bone in a cast or giving antibiotics for an infected joint helps reduce pain.... read more (NSAIDs), disease-modifying antirheumatic drugs Disease-modifying antirheumatic drugs (DMARDs) Rheumatoid arthritis is an inflammatory arthritis in which joints, usually including those of the hands and feet, are inflamed, resulting in swelling, pain, and often destruction of joints.... read more

(DMARDs—especially methotrexate), the immunosuppressant cyclosporine, and biologic agents Biologic agents Rheumatoid arthritis is an inflammatory arthritis in which joints, usually including those of the hands and feet, are inflamed, resulting in swelling, pain, and often destruction of joints.... read more

Biologic agents are made from living organisms and inhibit certain chemicals involved in the immune system Overview of the Immune System The immune system is designed to defend the body against foreign or dangerous invaders. Such invaders include Microorganisms (commonly called germs, such as bacteria, viruses, and fungi) Parasites... read more . They include tumor necrosis factor (TNF) inhibitors Immunosuppressive drugs Rheumatoid arthritis is an inflammatory arthritis in which joints, usually including those of the hands and feet, are inflamed, resulting in swelling, pain, and often destruction of joints.... read more