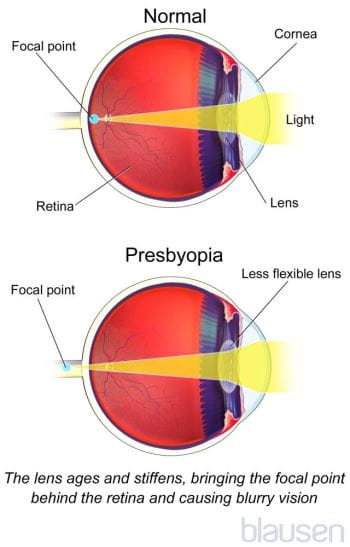 Nearsightedness and Farsightedness
In refractive disorders, light rays entering the eye are not focused on the retina, causing blurred vision.

The eye normally creates a clear image because the cornea and lens bend (refract) incoming light rays to focus them on the retina. The shape of the cornea is fixed, but the lens changes shape to focus on objects at various distances from the eye. By becoming more rounded, the lens allows near objects to be focused. By becoming flatter, the lens allows objects farther away to be focused. When the cornea and lens cannot focus the image of an object sharply on the retina, it is called a refractive error.

The lens and cornea may not bend light rays to focus them on the retina correctly for several reasons.

Nearsightedness (myopia) occurs when the eyeball is too long for the refractive power of the cornea and lens. Because of the corneal curvature and relatively long size, light is focused in front of (rather than directly on) the retina, and the person has trouble clearly seeing distant objects. In children, nearsightedness frequently increases until children stop growing.

Farsightedness (hyperopia) occurs in some people when the eyeball is too short for the refractive power of the cornea and lens. Because of the relatively short size, light is focused behind the retina. Children and young adults who are mildly farsighted may be able to see clearly if their lens is flexible enough to properly refocus light on the retina. However, with aging, the lens stiffens. Thus, as farsighted adults age, seeing near objects clearly becomes more difficult and seeing distant objects also becomes more difficult. Blurring of nearby objects is worse in dim light.

Astigmatism What Is Astigmatism? Blurred vision is the most common vision symptom. When doctors talk about blurred vision, they typically mean a decrease in sharpness or clarity that has developed gradually. Sudden, complete... read more

is an imperfectly shaped cornea or lens (not perfectly round or spherical), which may cause objects to appear blurred at any distance.

In anisometropia, people have a significant difference between the refractive errors of the eyes.

Aphakia is the absence of a lens resulting from a birth defect, eye injury, or eye surgery for removal of a cataract. If a person has had a lens removed to treat cataracts Cataract A cataract is a clouding (opacity) of the lens of the eye that causes a progressive, painless loss of vision. Vision may be blurred, contrast may be lost, and halos may be visible around lights... read more

but has not had a lens implant, objects look blurred at any distance.

A person who has a refractive error may notice that vision is blurred Vision, Blurred Blurred vision is the most common vision symptom. When doctors talk about blurred vision, they typically mean a decrease in sharpness or clarity that has developed gradually. Sudden, complete... read more

for distant objects, near objects, or both. For example, a child who becomes nearsighted may have difficulty seeing the chalkboard in school. People may sometimes have headaches caused by squinting or frowning. In children, frowning and squinting when reading and excessive blinking or rubbing of the eyes may indicate the child has a refractive error. Occasionally, when a person stares for a long time trying to read something, the eyes can dry out and become itchy, red, or irritated, and vision seems temporarily blurred.

Everyone should have regular eye examinations The Eye Examination A person who has eye symptoms should be checked by a doctor. However, some eye disorders cause few or no symptoms in their early stages, so the eyes should be checked regularly (every 1 to 2... read more by an ophthalmologist (a medical doctor who specializes in the evaluation and treatment [surgical and nonsurgical] of eye disorders) or an optometrist (a health care practitioner who specializes in the diagnosis and treatment of refractive errors). This eye examination should be repeated every 1 or 2 years. Screening children helps detect refractive errors before they interfere with learning.

During the examination, an eye chart is used to determine sharpness of vision (visual acuity). Visual acuity is measured in relation to what a person with normal (unimpaired) vision sees. For example, a person with 20/60 vision sees at 20 feet (about 6 meters) what a person with normal vision sees at 60 feet (about 18 meters). In other words, the person must be 20 feet away to read letters that a person with normal vision can read from 60 feet away. Although refractive errors usually occur in otherwise healthy eyes, testing generally also includes assessments unrelated to refractive error, such as a test of the visual fields Visual Field Testing A person who has eye symptoms should be checked by a doctor. However, some eye disorders cause few or no symptoms in their early stages, so the eyes should be checked regularly (every 1 to 2... read more , eye pressures, and eye movements.