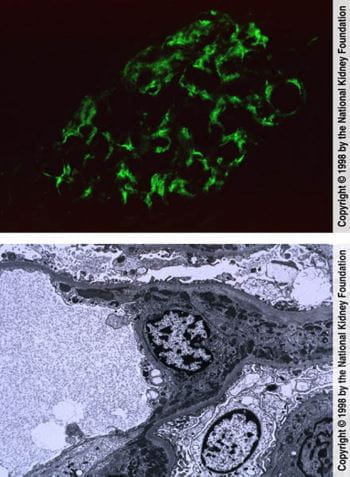 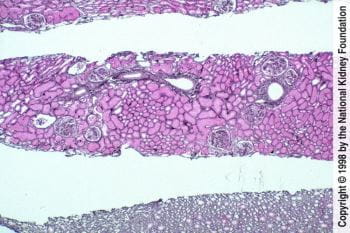 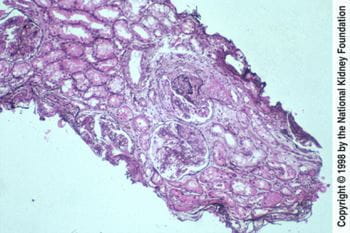 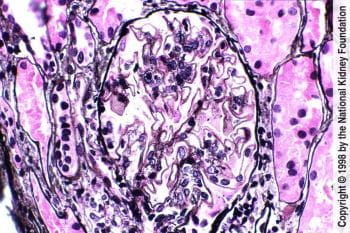 Classification of Lupus Nephritis
Lupus nephritis is glomerulonephritis caused by systemic lupus erythematosus (SLE). Clinical findings include hematuria, nephrotic-range proteinuria, and, in advanced stages, azotemia. Diagnosis is based on renal biopsy. Treatment is of the underlying disorder and usually involves corticosteroids and cytotoxic or other immunosuppressant drugs.

Lupus nephritis is diagnosed in about 50% of patients with SLE Systemic Lupus Erythematosus (SLE) Systemic lupus erythematosus is a chronic, multisystem, inflammatory disorder of autoimmune etiology, occurring predominantly in young women. Common manifestations may include arthralgias and... read more

and typically develops within 1 year of diagnosis. However, the total incidence is probably > 90%, because renal biopsy Renal biopsy Biopsy of the urinary tract requires a trained specialist (nephrologist, urologist, or interventional radiologist). Indications for diagnostic biopsy include unexplained nephritic or nephrotic... read more in patients with suspected SLE without clinical evidence of renal disease shows changes of glomerulonephritis (GN).

Subendothelial, intramembranous, subepithelial, or mesangial deposits are characteristic. Wherever immune complexes are deposited, immunofluorescence staining is positive for complement and for IgG, IgA, and IgM in varying proportions. Epithelial cells may proliferate, forming crescents.

This syndrome may occur with or without lupus nephritis in up to one third of patients with SLE. The syndrome occurs in the absence of any other autoimmune process in 30 to 50% of affected patients. In antiphospholipid antibody syndrome Antiphospholipid Antibody Syndrome (APS) Antiphospholipid antibody syndrome is an autoimmune disorder in which patients have autoantibodies to phospholipid-bound proteins. Venous or arterial thrombi may occur. The pathophysiology is... read more , circulating lupus anticoagulant causes microthrombi, endothelial damage, and cortical ischemic atrophy. Antiphospholipid syndrome nephropathy increases a patient’s risk of hypertension and renal insufficiency or failure compared with lupus nephritis alone.

The most prominent symptoms and signs are those of SLE; patients who present with renal disease may have edema, foaming urine, hypertension, or a combination.

. Diagnosis is also suspected in patients with unexplained hypertension, elevated serum creatinine levels, or abnormalities on urinalysis who have clinical features suggesting SLE.

Urinalysis is done and serum creatinine is measured.

If either is abnormal, renal biopsy is usually done to confirm the diagnosis and classify the disorder histologically. Histologic classification helps determine prognosis and direct treatment.

. Overlap between these categories is substantial, and patients may progress from one class to another.

), as do other renal histologic features. Renal biopsies are scored with a chronicity index and with a semiquantitative activity score.

Black patients with lupus nephritis are also at higher risk of progression to end-stage renal disease.

) is also high, because of frequent vasculitis Overview of Vasculitis Vasculitis is inflammation of blood vessels, often with ischemia, necrosis, and organ inflammation. Vasculitis can affect any blood vessel—arteries, arterioles, veins, venules, or capillaries... read more

, and use of corticosteroids.

should be treated aggressively.

Treatment is toxic and thus is reserved for nephritis that has the following characteristics:

Activity is estimated by the activity score as well as clinical criteria (eg, urine sediment, increasing urine protein, increasing serum creatinine). Many experts believe that a mild to moderate chronicity score, because it suggests reversibility, should provoke more aggressive therapy than a more severe chronicity score. Nephritis with the potential for deterioration and for reversibility is usually class III or IV; it is unclear whether class V nephritis warrants aggressive treatment.

One induction regimen consists of cyclophosphamide, which is usually given in IV boluses (monthly for up to 6 months) beginning with 0.75 g/m2 in a saline solution over 30 to 60 minutes and, assuming a white blood cell (WBC) count > 3000/microL, increasing to a maximum of 1 g/m2. Oral or IV fluid administration to create rapid urine flow minimizes the bladder toxicity of cyclophosphamide, as does mesna (see table IV Cyclophosphamide Protocols for Systemic Lupus Erythematosus IV Cyclophosphamide Protocols for Systemic Lupus Erythematosus Systemic lupus erythematosus is a chronic, multisystem, inflammatory disorder of autoimmune etiology, occurring predominantly in young women. Common manifestations may include arthralgias and... read more

Another induction regimen uses mycophenolate mofetil with a target dose of 3 g/day. Prednisone is also begun at 60 to 80 mg orally once a day and tapered according to response to 20 to 25 mg every other day over 6 to 12 months. The amount of prednisone is determined by the extrarenal manifestations and number of relapses. Relapses are usually treated with increasing doses of prednisone. Both induction regimens are equally efficacious, although systemic toxicity may be less with mycophenolate mofetil than with cyclophosphamide.

Many experts are replacing the more toxic cyclophosphamide maintenance regimens (after induction with 6 or 7 monthly IV cyclophosphamide doses) with protocols using mycophenolate mofetil 500 mg to 1 g orally twice a day or, as a second choice, azathioprine 2 mg/kg orally once a day (maximum 150 to 200 mg/day). Chlorambucil, cyclosporine, and tacrolimus have also been used, but relative efficacies are not clear. Low-dose prednisone 0.05 to 0.2 mg/kg orally once a day is continued and titrated based on disease activity. Duration of maintenance therapy is at least 1 year.

Anticoagulation is of theoretical benefit for patients with antiphospholipid syndrome nephropathy, but the value of such treatment has not been established.