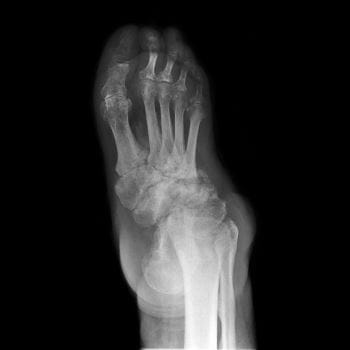 Neurogenic Arthropathy of the Foot

Conditions Underlying Neurogenic Arthropathy
Neurogenic arthropathy is a rapidly destructive arthropathy due to impaired pain perception and position sense, which can result from various underlying disorders, most commonly diabetes and stroke. Common manifestations include joint swelling, effusion, deformity, and instability. Pain may be disproportionately mild due to the underlying neuropathy. Diagnosis requires x-ray confirmation. Treatment consists of joint stabilization, which slows disease progression, and sometimes surgery if the disease is advanced. 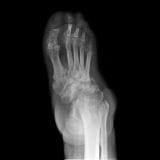 Symptoms and Signs of Neurogenic Arthropathy

Arthropathy does not usually develop until years after onset of the neurologic condition but can then progress rapidly and lead to complete joint disorganization in a few months. Pain is a common early symptom. However, because the ability to sense pain is commonly impaired, the degree of pain is often unexpectedly mild for the degree of joint damage. A prominent, often hemorrhagic, effusion and subluxation and instability of the joint are usually present during early stages. Acute joint dislocation sometimes occurs also.

During later stages, pain may be more severe if the disease has caused rapid joint destruction (eg, periarticular fractures or tense hematomas). During advanced stages, the joint is swollen from bony overgrowth and massive synovial effusion. Deformity results from dislocations and displaced fractures. Fractures and bony healing may produce many loose pieces of cartilage or bone that can slough into the joint, causing a coarse, grating, often audible crepitus usually more unpleasant for the observer than for the patient. The joint may feel like a “bag of bones.”

Although many joints can be involved, the knee and the ankle are most often affected. Distribution depends largely on the underlying disease. Thus, tabes dorsalis affects the knee and hip, and diabetes mellitus affects the foot and ankle. Syringomyelia commonly affects the spine and upper limb joints, especially the elbow and shoulder. Frequently, only one joint is affected and usually no more than two or three (except for the small joints of the feet), in an asymmetric distribution.

Infectious arthritis may develop with or without systemic symptoms (eg, fever, malaise), particularly with diabetes, and requires a high index of suspicion. Structures such as blood vessels, nerves, and the spinal cord can become compressed due to the tissue overgrowth.

The diagnosis of neurogenic arthropathy should be considered in a patient with a predisposing neurologic disorder who develops a destructive but unexpectedly painless arthropathy, usually several years after the onset of the underlying neurologic condition. If neurogenic arthropathy is suspected, x-rays should be taken. Diagnosis is established by characteristic x-ray abnormalities in a patient with a predisposing condition and typical symptoms and signs.

X-ray abnormalities in neurogenic arthropathy are often similar to those in osteoarthritis (OA—see diagnosis of OA Diagnosis Osteoarthritis is a chronic arthropathy characterized by disruption and potential loss of joint cartilage along with other joint changes, including bone hypertrophy (osteophyte formation). Symptoms... read more

). The cardinal signs are

There may also be synovial effusion and joint subluxation. Later, the bones are deformed, and new bone forms adjacent to the cortex, starting within the joint capsule and often extending up the shaft, particularly in long bones. Rarely, calcification and ossification occur in the soft tissues. Large, bizarrely shaped osteophytes may be present at the joint margins or within joints. Large curved (parrot’s beak) osteophytes frequently develop in the spine in the absence of clinical spinal disease.

Early diagnosis of asymptomatic or minimally symptomatic fractures facilitates early treatment; stabilization (with splints, special boots, or calipers) protects the joint from further injury, possibly stopping disease evolution. Prevention of neurogenic arthropathy may even be possible in a patient at risk.

Treatment of the underlying neurologic condition may slow progression of the arthropathy and, if joint destruction is still in the early stages, partially reverse the process. For a grossly disorganized joint, arthrodesis using internal fixation, compression, and an adequate bone graft may be successful. For grossly disorganized hip and knee joints, if neurogenic arthropathy is not expected to be progressive, good results can be obtained with total hip and knee replacements. However, loosening and dislocation of the prosthesis are major hazards.