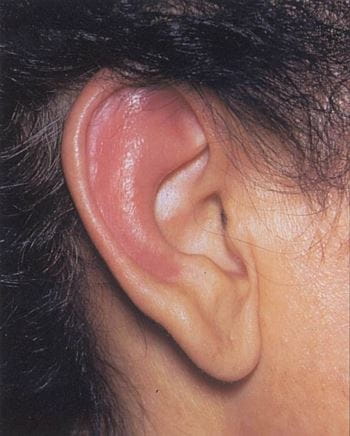 This disorder affects men and women equally, usually in middle age. The cause of relapsing polychondritis is unknown, but autoimmune reactions to cartilage are suspected.

Typically, one ear or both ears (but not the ear lobes) become red, swollen, and very painful. At the same time or later, a person can develop joint inflammation (arthritis), which may be mild or severe. Cartilage in any joint may be affected, and the cartilage that connects the ribs to the breastbone may become inflamed. Cartilage in the nose is also a common site of inflammation. The nose may become tender, and cartilage can collapse.

Other affected sites include the eyes, resulting in inflammation. Rarely, the cornea may develop a hole (perforation), resulting in blindness. The voice box (larynx), windpipe (trachea), or airways of the lungs can be affected, resulting in hoarseness, a nonproductive cough, shortness of breath, and tenderness over the Adam’s apple. Less often, the heart is involved, leading to heart murmurs and occasionally to heart failure. Rarely, the kidneys are affected.

Flare-ups of inflammation and pain last a few weeks, subside, then recur over a period of several years. Eventually, the supporting cartilage can be damaged, resulting in floppy ears, a sloping saddle nose, and a hollow at the lower part of the chest (pectus excavatum). The nerve in the inner ear can be affected, causing eventual problems with balance and hearing, and eventually vision problems can occur.

People who have this disorder may die if the cartilage in their airways collapses, blocking the flow of air, or if their heart and blood vessels are severely damaged.

Relapsing polychondritis is diagnosed when a doctor observes at least three of the following symptoms developing over time:

A biopsy of the affected cartilage (most often from the ear) may show characteristic abnormalities but is not required for diagnosis.

Blood tests, such as the erythrocyte sedimentation rate, can detect evidence of inflammation. Blood tests also reveal whether the person has a low number of red blood cells or a high number of white blood cells and whether certain antibodies are present. Although blood test results can help doctors diagnose relapsing polychondritis, they alone cannot confirm a definite diagnosis of relapsing polychondritis because sometimes the abnormalities they detect are present in healthy people or in people who have other disorders. The diagnosis of relapsing polychondritis is based on all of the information doctors gather, including symptoms, physical examination results, and all test results.

Newer therapies have decreased the rate of death, and the survival rate is now 94% after 8 years. People with relapsing polychondritis tend to die earlier than they otherwise would, most often because of damage to the heart, lungs, or blood vessels.

Mild relapsing polychondritis of the ear can be treated with nonsteroidal anti-inflammatory drugs Nonsteroidal Anti-Inflammatory Drugs In some cases, treating the underlying disorder eliminates or minimizes the pain. For example, setting a broken bone in a cast or giving antibiotics for an infected joint helps reduce pain.... read more (NSAIDs) or dapsone. However, most people are given a dose of the corticosteroid prednisone that is gradually decreased as the symptoms begin to lessen. In some people, symptoms do not lessen, so the dose of corticosteroids cannot easily be decreased. These people may also be given methotrexate to reduce the need for corticosteroids.

Sometimes very severe cases are treated with immunosuppressive drugs such as cyclosporine, cyclophosphamide, or azathioprine or drugs that inhibit a chemical called tumor necrosis factor (for example, infliximab or etanercept). These drugs treat the symptoms but have not been shown to alter the ultimate course of the disorder.

Surgery may be needed to correct collapse or narrowing of the trachea.

. To prevent osteoporosis, these people are given the drugs used to treat osteoporosis, such as bisphosphonates Drugs Osteoporosis is a condition in which a decrease in the density of bones weakens the bones, making breaks (fractures) likely. Aging, estrogen deficiency, low vitamin D or calcium intake, and... read more

and supplemental vitamin D and calcium Calcium and vitamin D Osteoporosis is a condition in which a decrease in the density of bones weakens the bones, making breaks (fractures) likely. Aging, estrogen deficiency, low vitamin D or calcium intake, and... read more

. People who are receiving immunosuppressants are also given drugs to prevent infections such as by the fungus Pneumocystis jirovecii (see prevention of pneumonia in immunocompromised people Prevention Pneumonia is infection of the lungs. Pneumonia in people whose immune system is weakened or impaired (for example, by acquired immunodeficiency syndrome [AIDS], cancer, organ transplantation... read more ).