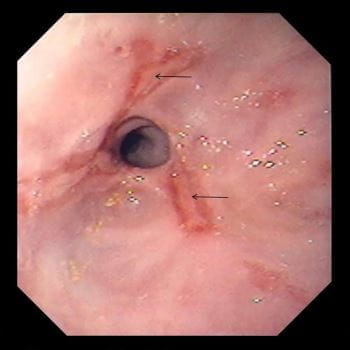 Narrowing (Stricture) of the Esophagus

The stomach lining protects the stomach from the effects of its own acid. Because the esophagus lacks a similar protective lining, stomach acid and bile that flow backward (reflux) into the esophagus may cause symptoms and in some cases damage.

Acid and bile reflux into the esophagus when the lower esophageal sphincter is not functioning properly. When a person is standing or sitting, gravity helps prevent the reflux of stomach contents into the esophagus, which explains why reflux can worsen when a person is lying down. Reflux is also more likely to occur soon after meals, when the volume and acidity of contents in the stomach are higher and the sphincter is less likely to work properly. Factors contributing to reflux include

Types of drugs that interfere with lower esophageal sphincter function include those that have anticholinergic effects Anticholinergic: What Does It Mean? Drugs, the most common medical intervention, are an important part of medical care for older people. Without drugs, many older people would function less well or die at an earlier age. Older... read more

(such as many antihistamines and some antidepressants), calcium channel blockers, progesterone, and nitrates. Delayed emptying of the stomach (for example, due to diabetes or use of opioids) can also worsen reflux.

Heartburn (a burning pain behind the breastbone) is the most obvious symptom of gastroesophageal reflux. Heartburn may be accompanied by regurgitation Regurgitation and Rumination Regurgitation is the spitting up of food from the esophagus or stomach without nausea or forceful contractions of the abdominal muscles. Rumination is regurgitation with no apparent physical... read more , in which the stomach contents reach the mouth. If stomach contents reach the mouth, they sometimes cause sore throat, hoarseness, cough, or a sensation of a lump in the throat Lump in Throat Some people feel as if they have a lump or mass in their throat when no mass is actually there. If this sensation is unrelated to swallowing, it is termed globus sensation, or globus hystericus... read more (globus sensation). Sometimes, stomach contents trickle into the lungs, causing cough and/or wheezing. People who have longstanding heartburn sometimes develop difficulty swallowing (dysphagia Difficulty Swallowing Some people have difficulty swallowing (dysphagia). In dysphagia, foods and/or liquids do not move normally from the throat (pharynx) to the stomach. People feel as though food or liquids become... read more ).

Inflammation of the esophagus (esophagitis or erosive esophagitis) causes symptoms typical of gastroesophageal reflux disease but perhaps more severe. It also may cause pain with swallowing (odynophagia). Some people have bleeding that is usually slight but can be massive. The blood may be vomited up or may pass through the digestive tract, resulting in the passage of dark, tarry stools (melena) or bright red blood, if the bleeding is heavy enough. Mild bleeding over a long period of time can cause iron deficiency anemia Iron Deficiency Anemia Iron deficiency anemia results from low or depleted stores of iron, which is needed to produce red blood cells. Excessive bleeding is the most common cause. People may be weak, short of breath... read more .

Esophageal ulcers are open sores on the lining of the esophagus. They can cause chest pain upon swallowing that is usually located behind the breastbone or just below it, similar to the location of heartburn.

Prolonged irritation causes the cells lining the esophagus to change, which results in a condition called Barrett esophagus. Changes may occur without symptoms. These abnormal cells are precancerous and can sometimes progress to cancer.

When symptoms point to the diagnosis of GERD, treatment can be started without testing. Testing is usually reserved for situations in which the diagnosis is not clear, treatment has not controlled symptoms, or symptoms have been present for a long time.

When testing is needed, the first test is usually to examine the esophagus using a flexible viewing tube (endoscopy Endoscopy Endoscopy is an examination of internal structures using a flexible viewing tube (endoscope). Endoscopy can also be used to treat many disorders because doctors are able to pass instruments... read more ). Endoscopy is the best test for diagnosing esophagitis, erosive esophagitis, esophageal ulcer, esophageal strictures, esophageal cancer, and Barrett esophagus. During endoscopy, doctors may remove tissue for examination under a microscope (biopsy).

Pressure measurements at the lower esophageal sphincter using a test called manometry Manometry Manometry is measurement of pressure within various parts of the digestive tract. People must not eat or drink anything after midnight before the test. In this test, a flexible tube with pressure... read more indicate how well the sphincter is functioning and also provide information on the strength with which the esophageal muscles push. The information gained from this test helps the doctor decide whether surgery is an appropriate treatment.

Several measures may be taken to relieve gastroesophageal reflux:

Raising the head of the bed about 6 inches (about 15 centimeters) can help prevent acid from flowing into the esophagus as a person sleeps. Drugs that cause symptoms should be avoided, as should smoking. Coffee, alcohol, fatty foods, acid-containing beverages such as orange juice, cola drinks, vinegar-based salad dressings, and other substances that strongly stimulate the stomach to produce acid or that delay stomach emptying should be avoided as well. People should avoid eating 3 hours before bedtime. People who are overweight and those who have gained weight recently should lose weight.

Proton pump inhibitors, the most powerful drugs for reducing stomach acid production, are usually the most effective treatment for gastroesophageal reflux and for esophagitis and erosive esophagitis due to gastroesophageal reflux. Healing typically requires taking the drugs for a 4- to 12-week period. These drugs may be continued long-term, but if this is necessary, doctors try to use a lower dose. Histamine-2 (H2) blockers are other acid-reducing drugs that are effective in people who have mild symptoms of GERD. Drugs that stimulate the movement of contents through the esophagus, stomach, and intestines (called promotility drugs) are not as effective as proton pump inhibitors but may be added to a proton pump inhibitor regimen.

Esophageal narrowing is treated by repeatedly dilating the narrowed area using balloons or tubes. If dilation is successful, narrowing does not seriously limit what a person can eat.

Surgery is an option for treatment of gastroesophageal reflux for people who cannot tolerate drugs, who have large amounts of reflux that is not acidic but that does cause symptoms, or who have ulcers, bleeding, large hernias, or severe esophagitis. In addition, surgery may be the preferred treatment for people who do not like the prospect of having to take drugs for many years. A minimally invasive procedure done through a laparoscope (called fundoplication) is available. However, some people who undergo this procedure have side effects, most commonly difficulty swallowing and a feeling of bloating or abdominal discomfort after eating.

Barrett esophagus rarely disappears after use of a proton pump inhibitor and typically remains unchanged. If the cells become precancerous, treatment options that can be done during endoscopy include methods that destroy the abnormal tissue using radio waves (radiofrequency ablation), extreme cold (cryotherapy), or a laser beam (laser ablation). Alternatively, the tissue may also be surgically removed. However, abnormal cells may still remain even after treatment relieves symptoms. Therefore, people with Barrett esophagus are asked to undergo an endoscopic examination periodically to ensure that the condition is not progressing to cancer.