Full review/revision Aug 2022 | Modified Sep 2022
VIEW PROFESSIONAL VERSION
GET THE QUICK FACTS
Topic Resources
Ovarian cancer is cancer of the ovaries. It is related to fallopian tube cancer, which develops in the tubes that lead from the ovaries to the uterus, and peritoneal cancer, which is cancer of the tissues that line the abdomen. These cancers are usually diagnosed at an advanced stage.

Because cancer of the ovaries and fallopian tubes share many features (symptoms, diagnosis, and treatment), they are usually considered together. Cancer that starts in the fallopian tubes is rare.

There are many types of ovarian cancer. They develop from the many different types of cells in the ovaries. Cancers that start on the surface of the ovaries (epithelial carcinomas) account for more that 90%. Most other ovarian cancers start from the cells that produce eggs (called germ cell tumors) or in connective tissue (called stromal cell tumors). Germ cell tumors usually occur in women younger than 30.

Sometimes cancers from other parts of the body spread to the ovaries.

Ovarian cancer can spread as follows:

Factors that increase the risk of ovarian cancer include the following:

About 14 to 18% of cases are related to mutations in the BRCA1 and BRCA2 genes, which are also involved in some breast cancers Breast cancer gene mutation Breast cancer occurs when cells in the breast become abnormal and divide uncontrollably. Breast cancer usually starts in the glands that produce milk (lobules) or the tubes (ducts) that carry... read more

. When mutations in these genes or other rare gene mutations are involved, ovarian and breast cancers tend to run in families. Such cancers are sometimes called hereditary breast and ovarian cancer syndromes. For women who have a BRCA1 mutation, the lifetime risk of developing ovarian cancer is 20 to 40%. Risk is increased less for women with a BRCA2 mutation. The BRCA1 and BRCA2 genes are more common among Ashkenazi Jewish women than the general population.

Ovarian cancer causes the affected ovary to enlarge. In young women, enlargement of an ovary is likely to be caused by a noncancerous fluid-filled sac (ovarian cyst Functional cysts Noncancerous (benign) ovarian growths include cysts (mainly functional cysts) and tumors. Most noncancerous cysts and tumors do not cause any symptoms, but some cause pain or a feeling of heaviness... read more

). However, after menopause, an enlarged ovary can be a sign of ovarian cancer.

Many women have no symptoms until the cancer is advanced. When symptoms are present, they are general. They include abdominal discomfort, bloating, loss of appetite, an early sense of fullness, a change in bowel habits, and frequent urination.

Eventually, the abdomen may swell because the ovary enlarges or fluid accumulates in the abdomen (called ascites Ascites Ascites is the accumulation of protein-containing (ascitic) fluid within the abdomen. Many disorders can cause ascites, but the most common is high blood pressure in the veins that bring blood... read more ). At this stage, pain in the pelvic area, anemia, and weight loss are common.

Diagnosing ovarian cancer in its early stages is difficult because symptoms usually do not appear until the cancer is quite large or has spread beyond the ovaries and because many less serious disorders cause similar symptoms.

If doctors detect an enlarged ovary during a physical examination or suspect early ovarian cancer based on symptoms, ultrasonography is done first. Sometimes computed tomography (CT) or magnetic resonance imaging (MRI) is used to help distinguish an ovarian cyst from a solid cancerous mass. If advanced cancer is suspected, CT or positive emission tomography Positron Emission Tomography (PET) Positron emission tomography (PET) is a type of radionuclide scanning. A radionuclide is a radioactive form of an element, which means it is an unstable atom that becomes more stable by releasing... read more 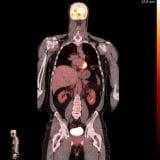 (PET) is usually done before surgery to determine extent of the cancer.

If doctors suspect cancer or test results are unclear, blood tests are usually done to measure levels of substances that may indicate the presence of cancer (tumor markers), such as cancer antigen 125 (CA 125). Abnormal tumor marker levels alone do not confirm the diagnosis of cancer, but when combined with other information, they can support the diagnosis.

A biopsy is done to confirm the diagnosis of ovarian cancer and, if the diagnosis is confirmed, to determine the type of cancer. Doctors examine the ovaries and other organs in the abdomen and pelvis (to check for spread). This procedure is done in one of two ways:

Doctors consider recommending genetic testing for any woman who is diagnosed with ovarian (or fallopian tube) cancer. Doctors also ask about any cancers family members have had. This information can help doctors identify women who are more likely to have a hereditary form of cancer, such as that caused by mutations in BRCA genes.

The prognosis for women with ovarian cancer is based on the stage.

The prognosis is worse when the cancer is more aggressive or when surgery cannot remove all visibly abnormal tissue. Cancer recurs in about 70% of women who have had stage III or IV cancer.

There is no screening test for ovarian or fallopian tube cancer. However, some experts believe that if ovarian or breast cancer runs in the family, women should be tested for genetic abnormalities. If first- or second-degree relatives have such cancers, particularly among Ashkenazi Jewish families, women should discuss genetic testing for BRCA abnormalities with their doctors.

Women with certain BRCA gene mutations may be offered the option of having both ovaries and fallopian tubes removed after they no longer wish to bear children, even when no cancer is present. This approach eliminates the risk of ovarian cancer and reduces the risk of breast cancer. More information is available from the National Cancer Institute Cancer Information Service (1-800-4-CANCER) and the Foundation for Women's Cancer.

The extent of surgery depends on the type of ovarian and fallopian tube cancer and the stage.

Because when ovarian and fallopian tube cancers are first diagnosed, they have usually spread throughout the abdomen, treatment typically involves one of the following:

For most ovarian and fallopian tube cancers, treatment involves removing the ovaries and fallopian tubes (salpingo-oophorectomy) and the uterus (hysterectomy). Laparoscopic surgery or robotic-assisted laparoscopic surgery Treatment Cancers can occur in any part of the female reproductive system—the vulva, vagina, cervix, uterus, fallopian tubes, or ovaries. These cancers are called gynecologic cancers. The most common... read more may be done first to determine whether more extensive surgery is a useful option. If it is not, chemotherapy is started.

When cancer has spread beyond the ovary, nearby lymph nodes and surrounding structures that the cancer typically spreads to are also removed. This approach aims to remove all visible cancer.

If a woman has stage I cancer that affects only one ovary and she wishes to become pregnant, doctors may remove only the affected ovary and fallopian tube.

For more advanced cancers that have spread to other parts of the body, doctors usually remove as much of the cancer as possible to prolong survival. This type of surgery is called cytoreductive surgery. However, depending on where the cancer has spread and how much cancer is present, women may be treated with chemotherapy instead of or before and after surgery.

After surgery, most women with less aggressive stage I epithelial carcinomas require no further treatment. For other stage I cancers or for more advanced cancers, chemotherapy may be used to destroy any small areas of cancer that may remain. Typically, chemotherapy consists of paclitaxel combined with carboplatin.

Most women with germ cell tumors can be cured with removal of the one affected ovary and fallopian tube plus combination chemotherapy, usually with bleomycin, cisplatin, and etoposide. Radiation therapy is rarely used.

Advanced ovarian cancer usually recurs. So after chemotherapy, doctors typically measure levels of cancer markers (such as CA 125). Cancer marker levels that remain high usually mean that some of the tumor remains.

If the cancer recurs after chemotherapy appeared to be effective, chemotherapy is repeated. Many different chemotherapy drugs (such as olaparib, niraparib, or rucaparib) or combinations of drugs may be used.