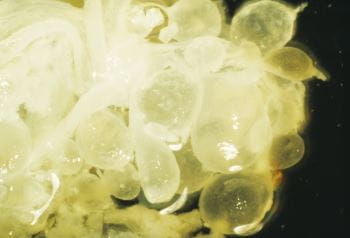 Gestational trophoblastic disease is a tumor originating from the trophoblast, which surrounds the blastocyst and develops into the chorion and amnion (see page Placenta and embryo at about 11 4/7 weeks gestation Amniotic sac and placenta For conception (fertilization), a live sperm must unite with an ovum in a fallopian tube with normally functioning epithelium. Conception occurs just after ovulation, about 14 days after a menstrual... read more ).

Gestational trophoblastic disease can occur during or after an intrauterine or ectopic pregnancy. If the disease occurs during a pregnancy, spontaneous abortion, eclampsia, or fetal death typically occurs; the fetus rarely survives.

Gestational trophoblastic disease may be

Hydatidiform moles are most common among women < 17 or > 35 and those who have previously had gestational trophoblastic disease. They occur in about 1/2000 gestations in the US. For unknown reasons, incidence in Asian countries approaches 1/200.

There are two types of molar pregnancy:

Initial manifestations of a hydatidiform mole suggest early pregnancy, but the uterus often becomes larger than expected within 10 to 16 weeks gestation. Commonly, women test positive for pregnancy and have vaginal bleeding and severe vomiting, and fetal movement and fetal heart sounds are absent. Passage of grapelike tissue strongly suggests the diagnosis.

Complications, such as the following, may occur during early pregnancy:

Choriocarcinoma usually manifests with symptoms due to metastases.

Hyperthyroidism is more common among women with gestational trophoblastic disease than in those without. Symptoms can include a tachycardia, warm skin, sweating, heat intolerance, and mild tremors.

Gestational trophoblastic disease is suspected in women with a positive pregnancy test and any of the following:

Invasive mole and choriocarcinoma are suspected if biopsy findings suggest invasive disease or if beta-hCG levels remain higher than expected after treatment for hydatidiform mole (see below).

A stage and risk score are assigned before gestational trophoblastic disease is treated.

After tumor removal, gestational trophoblastic disease is classified clinically to determine whether additional treatment is needed. The clinical classification system does not correspond to the morphologic classification system. Invasive mole and choriocarcinoma are classified clinically as persistent disease. The clinical classification is used because invasive mole and choriocarcinoma are treated similarly and because exact histologic diagnosis may require hysterectomy.

Persistent disease is usually treated with chemotherapy. Treatment is considered successful if at least 3 consecutive serum beta-hCG measurements at 1-week intervals are normal. Pregnancy should be prevented for 6 months after treatment because pregnancy would increase beta-hCG levels, making it difficult to determine whether treatment has been successful. Typically, oral contraceptives (any is acceptable) are given for 6 months; alternatively, any effective contraceptive method can be used.

Low-risk metastatic disease is treated with single-drug (eg, methotrexate, dactinomycin) chemotherapy preferably or with multidrug chemotherapy. High-risk metastatic disease requires aggressive multidrug chemotherapy because patients are likely to develop resistance if a single drug is used. EMA-CO is the most widely used regimen. It consists of etoposide, methotrexate, plus dactinomycin (EMA), alternating with cyclophosphamide plus vincristine (CO).

Risk of disease progression and resistance to single-drug chemotherapy is determined by the FIGO staging system and the WHO risk scoring system.

Gestational trophoblastic disease is considered low risk if it is one of the following:

Gestational trophoblastic disease is considered high risk if it is one of the following: