Although the pathogenesis remains unclear, these symptoms may be secondary to substances secreted by the tumor or may be a result of antibodies directed against tumors that cross-react with other tissue. Symptoms may occur in any organ or physiologic system. Up to 20% of cancer patients experience paraneoplastic syndromes, but often these syndromes are unrecognized.

The most common cancers associated with paraneoplastic syndromes include

Successful treatment is best achieved by controlling the underlying cancer, but some symptoms can be controlled with specific drugs (eg, cyproheptadine or somatostatin analogs for carcinoid syndrome Carcinoid Syndrome Carcinoid syndrome develops in some people with carcinoid tumors and is characterized by cutaneous flushing, abdominal cramps, and diarrhea. Right-sided valvular heart disease may develop after... read more

Patients with cancer often experience fever, night sweats, anorexia, and cachexia. These symptoms may arise from release of cytokines involved in the inflammatory or immune response or from mediators involved in tumor cell death, such as tumor necrosis factor-alpha. Alterations in liver function and steroidogenesis may also contribute.

Patients may experience many skin symptoms.

Itching is the most common cutaneous symptom experienced by patients with cancer (eg, leukemia, Hodgkin disease, myeloproliferative neoplasms, and lymphomas) and may also result from hypereosinophilia Hypereosinophilic Syndrome Hypereosinophilic syndrome is a condition characterized by peripheral blood eosinophilia with manifestations of organ system involvement or dysfunction directly related to eosinophilia in the... read more or mastocytosis Mastocytosis Mastocytosis is mast cell infiltration of skin or other tissues and organs. Symptoms result mainly from mediator release and include pruritus, flushing, and dyspepsia due to gastric hypersecretion... read more

Herpes zoster may result from reactivation of latent virus in patients with immune system depression or dysfunction.

The endocrine system is often affected by paraneoplastic syndromes.

Abnormalities in water and electrolyte balance, including hyponatremia Hyponatremia Hyponatremia is decrease in serum sodium concentration 136 mEq/L ( 136 mmol/L) caused by an excess of water relative to solute. Common causes include diuretic use, diarrhea, heart failure, liver... read more , may result from production of vasopressin and parathyroid hormone–like hormones from small cell and non–small cell lung cancer.

Refractory hyperglycemia may be due to glucagon-producing pancreatic tumors.

may result from abnormal epinephrine and norepinephrine secretion (pheochromocytomas) or from cortisol excess (ACTH-secreting tumors). 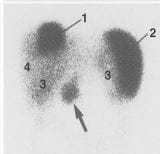 Demonstrated mechanisms of hematologic abnormalities include tumor-generated substances that mimic or block normal endocrine signals for hematologic cell line development and generation of antibodies that cross-react with receptors or cell lines.

Subacute sensory neuropathy is a more specific but rare peripheral neuropathy. Dorsal root ganglia degeneration and progressive sensory loss with ataxia but little motor weakness develop; the disorder may be disabling. Anti-Hu, an autoantibody, is found in the serum of some patients with lung cancer. There is no treatment.

Eaton-Lambert syndrome Eaton-Lambert syndrome Disorders of neuromuscular transmission affect the neuromuscular junction; they commonly cause fluctuating muscle weakness with no sensory deficits. (See also Overview of Peripheral Nervous... read more is an immune-mediated, myasthenia-like syndrome with weakness usually affecting the limbs and sparing ocular and bulbar muscles. It is presynaptic, resulting from impaired release of acetylcholine from nerve terminals. An IgG antibody is involved. The syndrome can precede, occur with, or develop after the diagnosis of cancer. It occurs most commonly in men with intrathoracic tumors (70% have small or oat cell lung carcinoma). Symptoms and signs include fatigability, weakness, pain in proximal limb muscles, peripheral paresthesias, dry mouth, erectile dysfunction, and ptosis. Deep tendon reflexes are reduced or lost. The diagnosis is confirmed by finding an incremental response to repetitive nerve stimulation: Amplitude of the compound muscle action potential increases > 200% at rates > 10 Hz. Treatment is first directed at the underlying cancer and sometimes induces remission. Amifampridine is a potassium channel blocker that prolongs presynaptic nerve terminal depolarization and can improve acetylcholine release. The recommended starting dosage of amifampridine is 15 mg to 30 mg daily, taken orally in divided doses (3 to 4 times/day). Amifampridine can cause seizures and is contraindicated in people with seizure disorders. If amifampridine is not tolerated or not available, the alternative is guanidine (initially 125 mg orally 4 times a day, gradually increased to a maximum of 35 mg/kg), which facilitates acetylcholine release, often lessens symptoms, but may depress bone marrow and liver function. Corticosteroids and plasma exchange benefit some patients.

Subacute cerebellar degeneration causes progressive bilateral leg and arm ataxia, dysarthria, and sometimes vertigo and diplopia. Neurologic signs may include dementia with or without brain stem signs, ophthalmoplegia, nystagmus, and extensor plantar signs, with prominent dysarthria and arm involvement. Cerebellar degeneration usually progresses over weeks to months, often causing profound disability. Cerebellar degeneration may precede the discovery of the cancer by weeks to years. Anti-Yo, a circulating autoantibody, is found in the serum or cerebrospinal fluid (CSF) of some patients, especially women with breast or ovarian cancer. MRI or CT may show cerebellar atrophy, especially late in the disease. Characteristic pathologic changes include widespread loss of Purkinje cells and lymphocytic cuffing of deep blood vessels. CSF occasionally has mild lymphocytic pleocytosis. Treatment is nonspecific, but some improvement may follow successful cancer therapy.

Opsoclonus (spontaneous chaotic eye movements) is a rare cerebellar syndrome that may accompany childhood neuroblastoma. It is associated with cerebellar ataxia and myoclonus of the trunk and extremities. Anti-Ri, a circulating autoantibody, may be present. The syndrome often responds to corticosteroids and treatment of the cancer.

Subacute necrotizing myelopathy is a rare syndrome in which rapid ascending sensory and motor loss occurs in gray and white matter of the spinal cord, leading to paraplegia. MRI helps rule out epidural compression from metastatic tumor—a much more common cause of rapidly progressive spinal cord dysfunction in patients with cancer. MRI may show necrosis in the spinal cord.

Encephalitis may occur as a paraneoplastic syndrome, taking several different forms, depending on the area of the brain involved. Global encephalitis has been proposed to explain the encephalopathy that occurs most commonly in small cell lung cancer. Limbic encephalitis is characterized by anxiety and depression, leading to memory loss, agitation, confusion, hallucinations, and behavioral abnormalities. Anti-Hu antibodies, directed against RNA binding proteins, may be present in the serum and spinal fluid. MRI may disclose areas of increased contrast uptake and edema.

Membranous glomerulonephritis may occur in patients with colon cancer, ovarian cancer, and lymphoma as a result of circulating immune complexes.

Rheumatologic disorders mediated by autoimmune reactions can also be a manifestation of paraneoplastic syndromes.

Arthropathies (rheumatic polyarthritis, polymyalgia), polychondritis, or systemic sclerosis may develop in patients with hematologic cancers such as myelodysplasia or chronic myelomonocytic leukemia or with cancers of the colon, pancreas, or prostate. Systemic sclerosis or systemic lupus erythematosus may also develop in patients with lung and gynecologic cancers.

and, to a lesser degree, polymyositis are thought to be more common in patients with cancer, especially in those > 50 years. Typically, proximal muscle weakness is progressive with pathologically demonstrable muscle inflammation and necrosis. A dusky, erythematous butterfly rash with a heliotrope hue may develop on the cheeks with periorbital edema. Corticosteroids may be helpful.